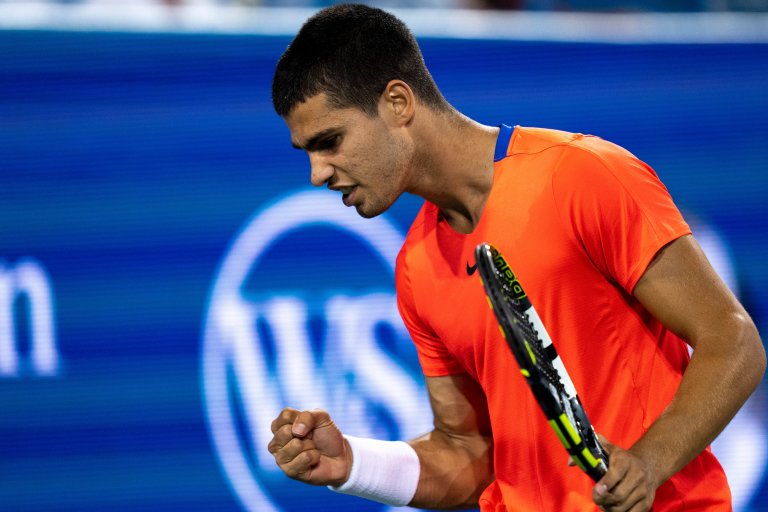 Carlos Alcaraz celebrates after winning a game against Carlos Alcaraz during the first set of their match in the Western & Southern Open at the Lindner Family Tennis Center in Mason, Ohio, on Thursday, Aug. 18, 2022.

The quarterfinals of the Western & Southern Open will be played today
Cameron Norrie and Carlos Alcaraz will go head-to-head for fourth time this afternoon
Continue below for odds, head-to-head stats and best bet

Ninth seed Norrie and third seed Alcaraz will face each other in the third quarterfinal match of the day, set for 4:15 pm ET.

Norrie enters the match after taking down American Ben Shelton 6-0, 6-2. And Alcaraz earned his spot in the quarterfinals after defeating Marin Cilic 7(7)-6(4), 6-1.

Odds as of August 19th at Draftkings Sportsbook.

19-year old Alcaraz comes into this quarterfinal match as the favorite with -320, and has won all three previous matchups against Norrie.

The 26-year old saw his first two matches go the distance. Holger Rune gave Norrie a tough match before the Brit ended up winning 7(7)-6(5), 4-6, 6-4, but nothing eased up after that opening match. Norrie then went up against fellow countryman Andy Murray, where he had to piece together a comeback after dropping the first set. He eventually won 3-6, 6-3, 6-4.

He then was finally handed a bit of a break when he dominated Shelton to earn a spot in the quarterfinals.

Domination from @cam_norrie in Cincinnati 💪

Norrie will now go up against a young superstar in Alcaraz. Unfortunately he hasn’t had the best luck against the 19-year old in the past, but he’ll look to stay alive in hopes to collect his third title of the year.

In case anyone wasn’t super familiar with Alcaraz, they are now. The young star has just continued to rise in the rankings, and could possibly see his standing move from four to two, if he were to win the title here in Cincy, as he’s less than 600 points shy of that No. 2 ranking.

After a bye in the first round, Alcaraz went up against American Mackenzie McDonald. He controlled the match, and ended up winning 6-3, 6-2, fairly easily. He then found himself up against Cilic, who gave him a tough match, especially in that first set. But the teenager was able to pull away to complete the win.

In his round of 16 win, Alcaraz recorded eight aces, and a 83 win percentage on his first serves.

With this win, Alcaraz is now 17-3 at ATP Master 1000s this season. Can he add a couple more wins and secure the title in Cincinnati?

The 19-year old currently holds a 3-0 head-to-head record against the Brit. Their first meeting was at the US Open in 2021, with their other two encounters happening earlier this year.

First off, both players are playing well this week.

Norrie had a bit of a rocky start to the tournament, but changed everything when he dominated his round of 16 match. If the Brit wants a chance against Alcaraz, he has to continue with his momentum, and minimize the amount of unforced errors.

After two matches this year already, it’s safe to say these two are relatively familiar with one another, and how they play. But there seems to be a slight edge favoring Alcaraz. Norrie won’t be an easy opponent for the Spaniard, so don’t be surprised if he takes a set off him.

If you’re betting on the match today, make sure to check out this DraftKings Sportsbook promo code that offers a unique sign-up bonus.