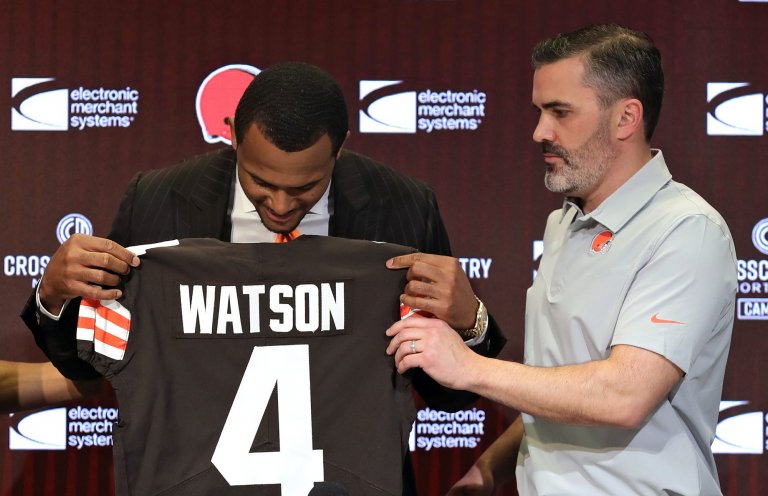 The six-game suspension being issued to Cleveland Browns quarterback Deshaun Watson by mediator Sue Robinson for violating the NFL’s personal conduct policy isn’t nearly as devastating as many were predicting. However, the positive impact on the odds of Cleveland winning the Super Bowl hasn’t proven to be tremendously dramatic.

The same can be said of the odds of the Browns winning the AFC North title. While the betting line has shortened, Cleveland is remaining the third betting choice to win the division.

Now that the Watson suspension is issued, betting sites are releasing lines on playoff chances and season win totals for the Browns. They’d both been off the board since the hearing first started.

Watson, who was issued the six-game sit down by the league, is facing 24 separate lawsuits for sexual misconduct accusations. Speculation is that these trials will carry over into 2023. Watson is maintaining his innocence on all charges.

There’s still a chance that this may not be the end of the Watson affair. While the NFLPA has signed off the the six-game suspension, NFL Commissioner Roger Goodell has three days to appeal the mediator’s ruling.

When the Browns acquired quarterback Watson from the Houston Texans, Cleveland’s Super Bowl betting line immediately shortened from +4000 to +1600. Cleveland’s Super Bowl odds crept back up to +1800 before jumping to +2500 when the Watson suspension hearings were getting underway. They remain the third choice in the division behind both the Baltimore Ravens (+2100) and defending AFC North and AFC Champion Cincinnati Bengals (+2100).

There was significant movement in terms of Cleveland’s odds to win the AFC North. The Browns were sitting as the third betting choice at +320 prior to Monday’s ruling. Today, they’ve shortened to as low as +230 at DraftKings. However, the Browns still remain the third choice in this betting market behind both Baltimore (+165) and Cincinnati (+210).

At the commencement of the Watson suspension hearings, Cleveland’s betting line to take the division title climbed from +170 all the way up to +320. Those odds were as short as +150 immediately following the Watson trade. Cleveland hasn’t won a division title since 1989.

Betting lines on Cleveland are returning in a number of markets. Game lines for the Browns were the first to reappear. The Browns are 1-point road favorites in Week 1, when they travel to Carolina to face their old QB Baker Mayfield and the Panthers.

Cleveland’s chances to make the the postseason are set at -105 for yes and -115 for no in the NFL playoff odds. Originally Cleveland was set at a favored betting line of -150 to make the NFL playoffs during the 2022 season. The no play was offering odds of +130.

In the NFL win totals odds, Cleveland’s number is the same as it was prior to the issuing of Watson’s suspension. When the Browns were originally removed from this betting market, their win total was set at 9.5. The under was the -105 favorite in this betting line.

With that betting line returning, the total is still situated at 9.5. The under has lengthened to -125, while the over is set at +105. The Browns are rated 27th in terms of NFL strength of schedule.

What to Do With Watson, Browns?

Watson sat out the 2021 NFL season after requesting a trade from the Texans. His vacation from football will be getting another extension, albeit not nearly as long as many NFL pundits were anticipating.

Minus Watson, the Browns have Jacoby Brissett and Joshua Dobbs to choose from as their QB. Brissett, previously a starter with the Indianapolis Colts and Miami Dolphins, is likely to fill in for Watson’s missing six games. He’s a less than stellar 14-23 as an NFL starter.

However, Cleveland’s slate without Watson isn’t all that challenging. The Browns go to Carolina and Atlanta. They’re home to the New York Jets, Pittsburgh, New England and the Los Angeles Chargers. Of that group, the Chargers look to be the only legitimate playoff contenders.

It’s conceivable that Brissett could hand Watson a 4-2 record. But then it gets ugly. Watson’s first five starts would be against Baltimore, Cincinnati, Miami, Buffalo and Tampa Bay. How sharp will be be after sitting out more than a year?

Should you consider betting the Browns in any of these markets?

Even with the suspension announced, the Watson circus isn’t leaving down. Cleveland is a train wreck at the best of times. A 9-8 or 8-9 season is likely to be the best hope for the Browns. Bet them to miss the playoffs and go under their win total.