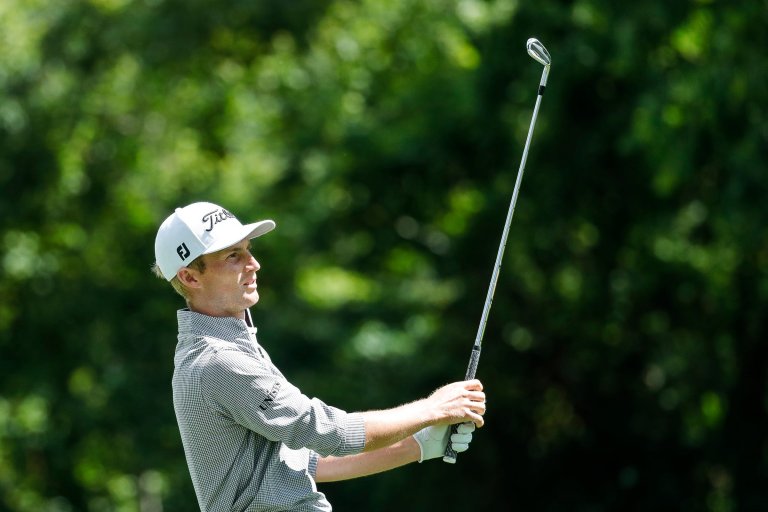 Will Zalatoris tees off on the ninth hole during the second round of Rocket Mortgage Classic at the Detroit Golf Club in Detroit, Friday, July 2, 2021.

The 150th British Open Championship from the Old Course at St. Andrews tees off Thursday, July 14th
Rory McIlroy is the +1800 favorite over Xander Schauffele to be atop the leaderboard after day one
See the best bets and odds to be the first-round leader in the article below

The final major championship of 2022 is upon us as the worlds best head to the birthplace of golf – St. Andrews. Rory McIlroy is the favorite to earn his second career Claret Jug, with Xander Schauffele close behind following his back-to-back wins. Tiger Woods is teeing it up for the first time since the PGA Championship, and it’s a place he loves, having won on the Old Course in both 2000 and 2005.

There are plenty of opportunities for sleepers and longshots to make some noise with it being such a stacked field. Those golfers that normally would see their odds much shorter now have them considerably longer with all the big names competing.

Odds as of July 12th at DraftKings Sportsbook.

The forecast calls for it to be partly cloudy throughout the day with some fleeting showers. Temperatures will be in the mid 50’s for those starting in the morning, reaching high 60’s for the afternoon wave. Wind gusts will be around 15 miles per hour for the first wave of players, increasing to low 20’s for those completing their rounds in the evening.

Patrick Cantlay (3:21pm tee time) has gotten out to quick starts this season, ranking fifth in first round scoring average. He’s also fifth in birdie average and eighth in birdie average, which shouldn’t be a surprise given his solid all-around game.

It comes as a bit of a surprise that he’s lacked success in the majors, posting only a pair of top-10’s in the biggest events in 2019, but no other instances. In his most recent one, however, he was T-14th at the U.S. Open, demonstrating that perhaps he’s figured out how to play majors.

Save for a missed cut at the PGA Championship, Cantlay hasn’t finished worse than that T-14th at the aforementioned U.S. Open in his previous seven starts, with four top-5’s. He demonstrated his ability to play links golf very well last week, where he was T-4th at the Scottish Open.

Will Zalatoris Exceptional at Majors

Will Zalatoris (10:20am) has done everything but win a major championship, racking up six top-8’s in the last eight majors. That includes back-to-back runner-ups at the PGA (in a playoff), and the U.S. Open (losing by one stroke).

Most strokes gained total per round in the majors since beginning of 2020 (min. 12 rounds played):

It’s safe to say he plays the majors extremely well, and he’s also outstanding on Thursday’s, as his worst score all season is a 72 (in 17 attempts).

Willy Z is first in strokes gained: tee-to-green and approach on the campaign. He’s found himself within the top-two on the leaderboard in six of the last eight major rounds, so putting faith in him to be able to be in the mix for the first round lead is absolutely a distinct possibility.

Ryan Fox (11:36am) may not be a household name stateside considering he focuses on competing on the DP World Tour, but he’s been red hot of late. In 2022, he’s registered seven top-10’s, with one victory, three runner-ups and a third place showing.

Unsurprisingly, his stats on the DP World Tour (formerly named European Tour), have been scintillating.

The 35-year-old New Zealander has made the cut in four of five career Open’s. In his last five tournaments, he’s been second twice and third once, mixed in with a missed cut and a T-47th. Fox is most certainly a wild card, but at these odds, he’s an intriguing play.