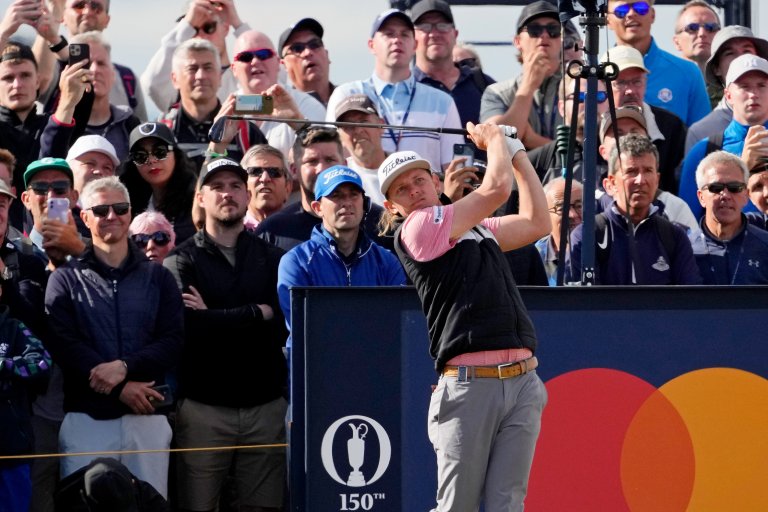 After the second round of the 150th Open Championship, Aussie Cameron Smith holds a two shot edge over Cameron Young with a blistering two-round total of 13-under-par. Coming into this tournament, Smith was +2200 to win outright, and those odds have now shortened to +165. Huge names are behind the leading two golfers, in the form of major winners Rory McIlroy, Dustin Johnson, and world number one Scottie Scheffler, along with Viktor Hovland, who has yet to taste major glory.

There were some notable names that won’t be competing on the weekend, with the cut falling at even par. Those include Tiger Woods, defending champ Collin Morikawa, Brooks Koepka, and 2013 Open champ Phil Mickelson. With Smith’s lights-out golf through a pair of rounds, he’s shrunk the field of realistic competitors down significantly, with just seven players within five strokes of his lead.

Read on to see the updated odds and best value bets heading into Saturday’s third round of the British Open Championship, along with who is stronger on Saturday’s for the year.

Odds as of July 15th at DraftKings Sportsbook.

Cameron Smith Sits Top of the Board

Cameron Smith has been something of an enigma of late after posting two victories at the Sentry Tournament of Champions in record scoring fashion, then the ‘fifth major’ at the Players Championship. Since a tie for third at the Masters, he’s put together three top-15’s, but also has two missed cuts and a pedestrian T-48th.

He’s quickly turned it around with a blistering two round total of 13-under-par, 131, which has never been done before. He’s made just one bogey in his first two rounds, racking up twelve birdies and an eagle.

His +165 number is very low to go all-in on, but with his incredible putting through 36 holes, there’s no reason to expect a collapse from one of the best putters on tour.

After day one, Rory McIlroy had +360 odds to win his second Claret Jug. Now they’re at +450, as he came in as the betting favorite. Keep in mind, Smith is T-8th in third round scoring, while Rory has struggled on moving day, ranking just 90th in that category.

Scottie Scheffler (+1000): This year’s Masters champion has made just two bogeys in the first two rounds, as he sits five back of Smith. The world number one has won four times on the campaign, and very nearly made it five at the U.S. Open, where he wound up in a tie for second. He’s third in third round scoring average for the season, so he’s used to going low on moving day.
Patrick Cantlay (+2800): Patrick Cantlay will begin a further stroke behind Scheffler, six back of top spot. In his last seven starts, he has a victory, a runner-up (in a playoff), and two other top-5’s. In those seven events, he’s been T-14th or better in all but one of them. He’s 14th in third round scoring, fifth in birdie average and eighth in scoring average for the year. Cantlay fired a very solid 5-under, 67 on Friday.