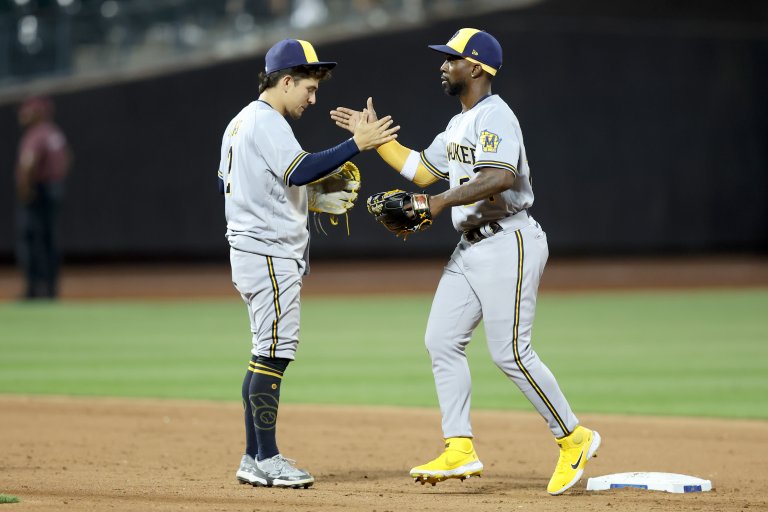 It’s a battle of NL Central contenders and cellar dwellers on Friday in Cincinnati, as the last place Reds take on the division favorite Brewers.

Milwaukee hasn’t exactly been playing like an elite club lately – more on that later, but nevertheless oddsmakers still made them the road chalk in this matchup.

The Brewers opened as -115 moneyline favorites in a contest that features a total of 9. First pitch is scheduled for 6:40 pm ET at the Great American Ball Park in Cincinnati, Ohio, with clear skies and 80+ degree game-time temperatures in the forecast.

The Brewers, a top-eight contender in the World Series odds, will give the ball to Eric Lauer. The southpaw was cruising along this season until his last outing, when he was walloped by the last place Nationals.

Lauer surrendered seven hits, eight runs and three homers over 5 innings, snapping his four start streak of allowing two earned runs or less. He’s yet to face Cincinnati this season, but was 0-2 versus them with a 4.20 ERA in 2021.

Cincinnati will counter with Hunter Greene, who’s fresh off two of his best starts of the season. The rookie’s allowed just three hits and one run over his past 12 innings, while posting a 15-2 strikeout-to-walk rate.

Hunter Greene has been named the NL Player of the Week❗ pic.twitter.com/bLQu24d9fo

He’ll look to solve the Milwaukee bats for the first time this season, as they’ve teed off against him in two previous matchups. Greene is 0-2 versus the Brewers so far, yielding 13 hits, 10 runs and six homers over 8 innings.

Milwaukee’s lineup finally got back on track on Wednesday pounding 11 hits and scoring 10 times in a win versus the Mets. Prior to that, the NL Central favorite in the MLB Divisional odds, had dropped 10 of 11 while averaging only 2.4 runs per contest.

7 runs in the 5th! pic.twitter.com/jFgrKGCKpk

They were batting .218 over that stretch with a slugging percentage that is 66 points lower and an OPS that is 82 points lower than their season marks. Fortunately for them, they absolutely own the Reds as we’ll discuss later on.

Cincy on the other hand, enters play as a below league average lineup, but has shown signs of life lately. They’re hitting .280 over the past two weeks, with a .441 slugging percentage and .789 OPS, numbers that absolutely dwarf their season long averages.

Milwaukee has taken nine of the past 11 meetings with Cincinnati, and nearly all have been in convincing fashion. They’ve posted a +32 run differential during that time, winning eight games by at least two runs. They have an average margin of victory of 5 runs in those nine wins, and an excellent track record against Greene.

The Reds lineup meanwhile, is trending up and performs significantly better at home than on the road. They have a slugging percentage that is 128 points higher at Great American Ball Park than as a visitor (.448 vs .320), and an OPS that is 201 points better (.796 vs .595).

Not surprisingly, 18 of their 29 home games have soared over the total, including all three against the Brewers.