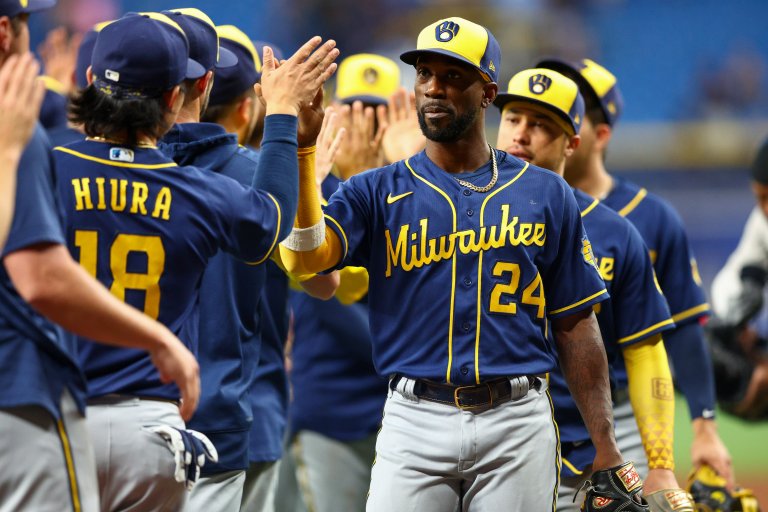 The Rays are -135 favorites over the Brewers on Wednesday
Left-hander Eric Lauer (6-3, 3.89) will start for Milwaukee against lefty opener Jalen Beeks (1-1, 2.59)
A look at the Brewers vs Rays odds can be found below with a pick

The visiting Milwaukee Brewers will try to sweep a two-game series from the Tampa Bay Rays when they meet at 12:10 p.m. ET Wednesday at Tropicana Field in St. Petersburg.

The Brewers (43-33/24-18 road) ran their winning streak to three games Tuesday night with a 5-3 victory over the Rays and stayed atop the National Central standings. The Rays (40-33/25-16 road) had their three-game winning streak end.

Odds as of XXXXX at Caesars Sportsbook.

The Tropicana Field roof will surely be closed as the high temperature is forecast to be 91 degrees and there is also a 30% chance of showers and thunderstorms.

Lauer is coming off a loss to the Cardinals last Wednesday in St. Louis. He yielded five runs and six hits in six innings with five strikeouts and one walk.

Goldy got all of it. 💪 pic.twitter.com/Vr2E8fNhJS

In his lone career appearance against the Rays, Lauer had a no-decision in 2019 while allowing three runs in five innings. This will be his first time pitching at Tropicana Field.

Beeks is coming off a rough relief outing Saturday against the visiting Pittsburgh Pirates in which he was touched for three runs in 1.2 innings while allowing two hits, striking out two and walking one.

This will be the first time Beeks has faced the Brewers.

Brewers batters are a combined 3 for 13 (.231) off Beeks. Rays batters have just a five plate appearances against Lauer with Ji-Man Choi going 2 for 3 with a pair of doubles.

Andrew McCutchen and Luis Urias each hit a two-run home run in the sixth inning Tuesday night as the Brewers wiped out a 3-0 deficit and went on to beat the Rays.

Urias added an RBI double in the eighth inning as he finished with two hits. Christian Yelich also had two hits for the Brewers.

The Brewers activated second baseman Kolten Wong from the injured list before the game after he had been sidelined since June 7 with a strained right calf. Wong was 1 for 3 with a double and two runs scored.

Yandy Diaz and Randy Arozarena each had two of the Rays’ five hits.

Randy rakes us into the lead pic.twitter.com/1zfkBsk4Wm

Choi is likely to miss the game after sitting out Tuesday with right ankle soreness.

This series marks the first meeting between the teams since 2017.

Lauer has tailed off after a fine start to the season, so let’s fade him in this one despite it being a bullpen day for the Rays.