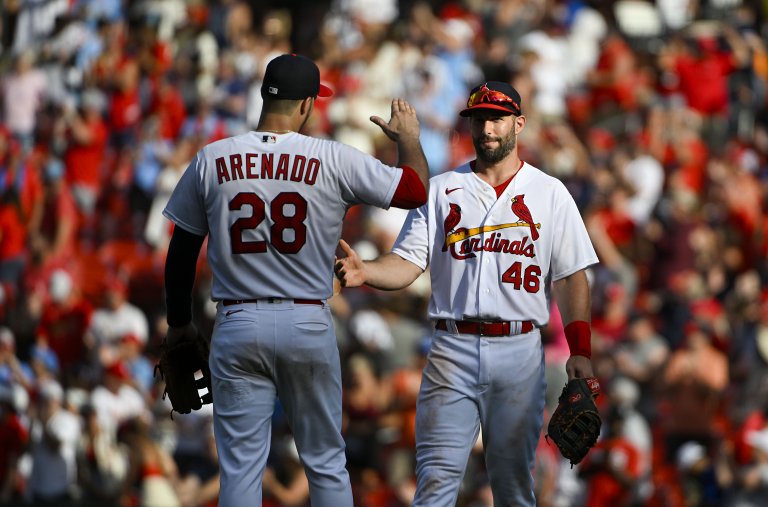 The Brewers and Cardinals begin a crucial three-game set on Friday
St. Louis currently has a half-game lead in the NL Central over Milwaukee
Find the Brewers vs Cardinals odds, preview, and pick below

Friday night marks the beginning of a very important three-game series between the two teams fighting for the NL divisional crown as the Milwaukee Brewers (60-50, 31-28 away) visit the St. Louis Cardinals (61-50, 35-20 home) at Busch Stadium. The first pitch is scheduled for 8:15 PM ET.

The Brew Crew will hand Eric Lauer the ball here, while trade deadline acquisition Jordan Montgomery will make his second start for the Cards after dominating in his debut.

The Cardinals are a -165 favorite for Friday’s contest. The last 10 meetings between these two teams were split straight down the middle with five wins apiece.

You can always count on Eric Lauer for at least one gem per postgame interview: pic.twitter.com/HElb4Tnqxo

Nevertheless, his last two outings have been solid, allowing a combined two runs. In Lauer’s most recent start, he gave up just one run across seven clean frames against the Reds en route to his eighth win of the campaign. The Cardinals have hit him around though in 2022. Lauer owns a 5.73 ERA against them in two appearances.

Montgomery came over to the Cardinals at the trade deadline from the Yankees and put it to his former team on August 6th his first start for St. Louis. The southpaw carved up the Bronx Bombers allowing just two hits in five innings of scoreless baseball. In fact, on the season, Montgomery has shown lots of consistency.

Jordan Montgomery with a solid start against his former team ?

Brew Crew Looking to Get Back on Track

Milwaukee did have the division lead for quite some time but they’ve faltered lately, going 4-6 in their last 10 games. However, the Brewers just swept the Rays in a quick two-game set, a much-needed confidence booster ahead of this vital series.

Wednesday’s victory over Tampa was full of late drama, with Rowdy Tellez tying the game with a solo shot in the bottom of the ninth to force extras. Willy Adames then came up with a game-winning RBI single in the 10th. Milwaukee has lost four in a row on the road, though.

St. Louis is hot, winning eight of their last 10 games. Even better, this team plays great baseball at Busch, going 35-20 as opposed to 26-30 on the road. Although the Cards did just drop two out of three to the Rockies, they did sweep the Yankees prior to that at home.

Thursday was an 8-6 loss to St. Louis where the bullpen ultimately allowed six earned runs. Offensively, Paul Goldschmidt, Corey Dickerson, and Nolan Gorman all had multi-hit days, with Goldschmidt and Nolan Arenado both going deep, back-to-back. The two stars are in the mix in NL MVP odds.

Lauer doesn’t have a good track record against the Cardinals and I think Milwaukee’s unfamiliarity with Montgomery will work in the lefty’s favor here. Take St. Louis to win the opener and hand the Brewers another road loss.