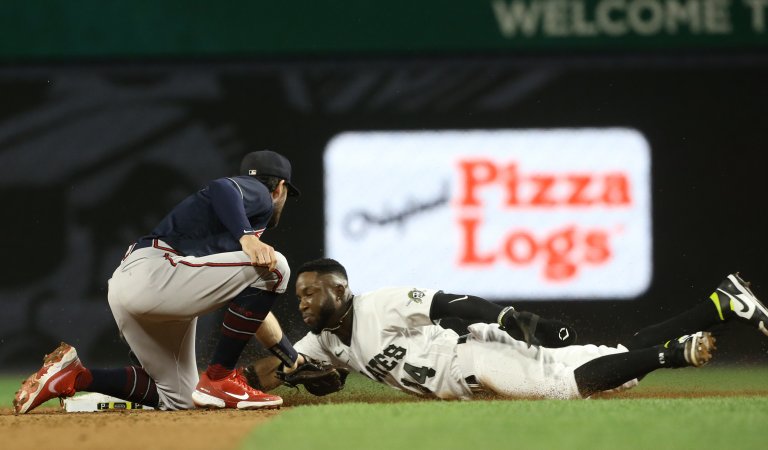 The Atlanta Braves are -250 road favorites over the Pittsburgh Pirates in a National League afternoon game set for Wednesday, August 24
Atlanta is 7-0 straight up in the past seven games against Pittsburgh
Below, find the Braves vs Pirates odds and best bets for Wednesday

Atlanta is 8-0 straight up over the past eight away games. The Braves are also 7-0 SU in the last seven games against the Pirates.

Pittsburgh is 2-10 through the past 12 games. In last place in the NL Central, the Pirates have fallen behind the Cincinnati Reds in the standings. The Reds opened the season 3-22.

Oddsmakers are heavily favoring the visiting Braves as these two teams complete a three-game series. Atlanta is an overwhelming -250 chalk. The Braves are 22-15 SU as a road favorite this season.

First pitch at PNC Park is set for 12:35pm ET on Wednesday, August 24. Mostly sunny skies with 4 mph wind and a temperature of 85 degrees is in the weather forecast.

In the MLB Division odds, the betting line is displaying the Pirates as +40000 longshots in the NL Central. Atlanta is the second betting choice at +310 in the NL East. The MLB pennant odds show the Braves as the +450 third choice to cop the NL flag. Bettors can access NL pennant odds of +100000 on Pittsburgh. In the World Series odds,  the Braves are the +1100 fifth choice. Pittsburgh is at a betting line of +200000.

Braves right-hander Kyle Wright leads the NL with 15 wins. His .750 winning percentage is fourth in the league. Wright is 8-1 over his last nine decisions.

Wright is also a pitcher who helps himself. He’s fourth among NL pitchers in assists (21) and ninth-best in bases on balls (24).

Wright has allowed two runs in seven of his last nine starts, while working at least six innings in eight of those starts. The Braves are 17-6 in his 23 starts this season.

He’s already beaten the Pirates 5-3 on June 12. Wright struck out seven over six innings in that game. That’s the only time he’s faced Pittsburgh.

Pirates right-hander Mitch Keller exited his last start Aug. 16 against the Boston Red Sox with shoulder discomfort. He allowed five runs, four of them earned, on five hits and three walks over just two innings of work in that game.

He’s surrendered seven earned runs in his past two starts after allowing just six over the previous five trips to the mound. On the other hand, Keller has allowed only four home runs through his past 13 starts.

Spoke with Mitch Keller for a second today. He told me he was back up to 95-96 mph in his bullpen sessions with his fastball. Asked about the fatigue last start he said his best guess was that he was just exhausted. So signs are generally positive heading into his start tomorrow.

For the Pirates, Tucupita Marcano is 3-for-3 (1.000) when facing Wright. Bryan Reynolds is 1-for-2 and that lone hit was a three-run homer.

Atlanta is one win away from sweeping the six-game season series from Pittsburgh. The Braves are 9-2 SU over the past 11 games and have outscored the opposition by a margin of 32 runs.

Pittsburgh is 1-5 against the run line when playing Atlanta this season. The Pirates are 2-9 SU over the past 11 games and have been outscored by 24 runs. Keller’s numbers at home, against the Braves and in day games are abysmal.