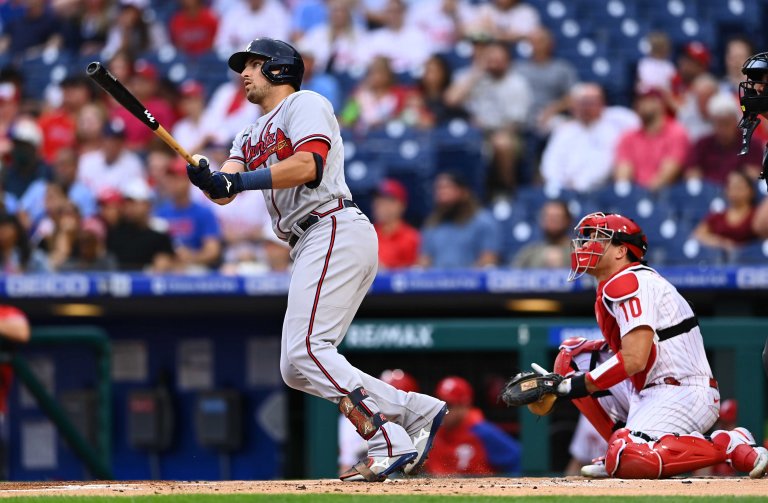 The Atlanta Braves are -145 road favorites over the Philadelphia Phillies in a National League afternoon game slated for Wednesday, July 27
Atlanta is 3-2 straight up in the past five games played at Philadelphia
See the Braves vs Phillies odds as the NL East rivals wrap up their three-game set

It’s the visiting Braves that oddsmakers are going with as the betting choice when these two teams take the diamond on Wednesday afternoon. Atlanta is set as the -145 favorite. In eight of the past nine games between these two clubs played at Philadelphia, the winning team has covered the runline.

First pitch at Citizens Bank Park is set for 12:35pm ET on Wednesday, July 27. Cloudy skies are in the forecast, with 5 mph wind and a temperature of 86 degrees.

At odds of -145, the Braves are offering an implied probability of victory of 59.18% in the MLB betting line. A successful $10 wager on Atlanta would deliver a payout of $16.90.

In MLB betting trends, public wagering is showing to be at odds with the oddsmakers on this game. They’re backing Philadelphia. The Phillies are pulling 63% of the moneyline and 88% of runline action. On the total, the under is maintaining a slight 52-48 edge on the over.

Braves right-hander Charlie Morton, who led the NL with 33 starts last season, will be taking the mound for his 20th start of 2022. Morton is 4-1 over his past five decisions.

He’s worked at least five innings in each of his last 10 starts. Morton’s 2.52 ERA in July is at least a full run better than any previous month this season. He’s showing a 2.22 ERA over his past seven starts. Morton is in the bottom five-percent of MLB pitchers in Max EV (115.8). He’s also hit 12 batters, the high among NL hurlers.

He’s faced the Phillies twice already this season. The Braves won both games, although Morton didn’t figure in either decision. He shows a 5.40 ERA in those two games. He’s 5-5 with a 4.65 ERA in 14 career starts against Philadelphia.

In his last six decisions, Phillies right-hander Kyle Gibson has gone W-L-W-L-W-L. If you believe in trends, he’ll be a winner in his next verdict. Gibson is 1-1 with a 6.75 ERA over his past five starts. He’s gotten through the fifth inning in just two of those starts.

Kyle Gibson’s slider has some bite to it 👀 pic.twitter.com/VzrJzrNo3p

Gibson went five innings against the Braves on May 23, allowing two earned runs. He didn’t factor in the decision as the Phillies lost 6-5. Gibson has collected four of his five wins this season at home.

In the midst of a six-game homestead, so far Philadelphia is 1-4 SU. In their past 15 games, the erratic Phillies have fashioned a pair of three-game win streaks along with losing skids of three and four games.

Braves 6, #Phillies 3:
(It helps to get the score correct!) Spencer Strider dared the Phillies to hit his blazing fastball. They mostly couldn’t. Phils have scored fewer than four runs in 11 of 14 games. Aaron Nola knocked around. Rubber game tomorrow at 12:35.