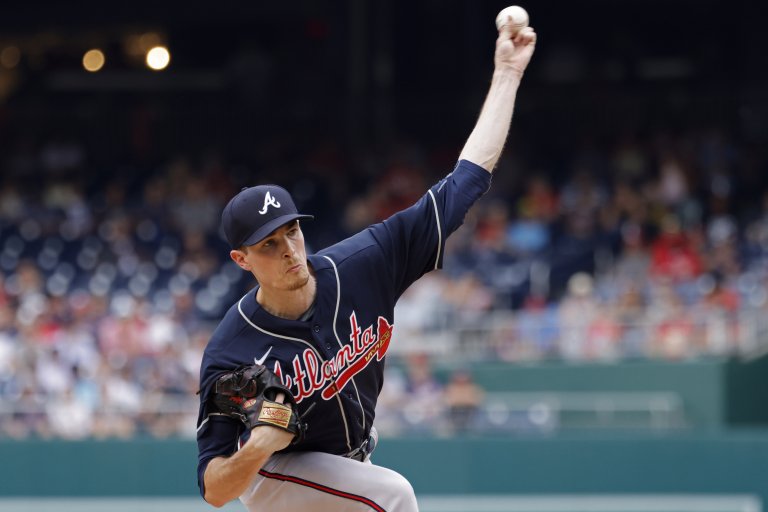 The Braves are -170 road favorites over the Phillies on Monday night
Max Fried (10-3, 2.64) will start for Atlanta against fellow lefty Ranger Suarez (7-5, 4.07)
A look at the matchups and odds can be found below with a pick

The National League East rival Atlanta Braves and Phillies meet at 7:05 p.m. ET Monday in the opener of a three-game series at Citizens Bank Park in Philadelphia.

The Braves (58-39/25-18 road) lost for just the second time in their last seven games Sunday when they were routed 9-1 by the Los Angeles Angels at home. The Phillies (49-46/24-24 home) were swept in a three-game weekend series by the visiting Chicago Cubs, including losing 4-3 on Sunday.

Odds as of July 24th at Caesars Sportsbook.

The game may not start on time as there is an 80% chance of showers and thunderstorms at gametime with a forecast temperature of 85 degrees and southwest wind at 5-10 mph.

Fried beat the Nationals on July 16 at Washington in his last start. He pitched seven innings and allowed three runs on seven hits with four strikeouts and no walks.

It was a milestone victory.

Suarez is 3-1 with a 3.28 ERA in his last four starts, including working five shutout inning to beat the Marlins on July 16 in Miami in his last start. Suarez gave up four hits, did walk a batter and struck out four.

This how it looked four months ago while pitching under the palm trees.

The Phillies’ J.T. Realmuto has been a tough matchup for Fried, hitting .357 (10 for 28) with two doubles, one triple and three home runs. Odubel Herrera is 4 for 7 with doubles and a homer but Didi Gregorius is 1 for 10.

The Angels jumped on the Braves for five runs in the top of the first inning Sunday and Atlanta never recovered. Ronald Acuna Jr. had two hits in a losing effort and drove in his team’s only run.

The Braves got some bad news before the game when they learned outfielder Adam Duvall will miss the remainder of the season as he requires surgery to repair a torn tendon sheath in his left wrist. First baseman Mike Ford was recalled from Triple-A Gwinnett.

Adam Duvall has had some huge moments for the Braves and if this is the end then I have the utmost gratitude. #ForTheA pic.twitter.com/s84jNd5EPd

Garrett Stubbs provided the Phillies’ highlight in Sunday’s loss to the Cubs with a home run.

The Braves are 4-3 against the Phillies this season, including winning two of three at in Philadelphia. Matt Olson is hitting .346 (9 for 26) for the Braves with four doubles and three home runs. Realmuto is 8 for 23 (.348) with a triple and a homer for the Phillies.

Since the start of last season, the Braves hold a slim 14-12 series lead.

Fried is having another fine season for the Braves. Suarez, though, is quietly pitching better than he has all season and makes the Phillies an intriguing underdog choice.