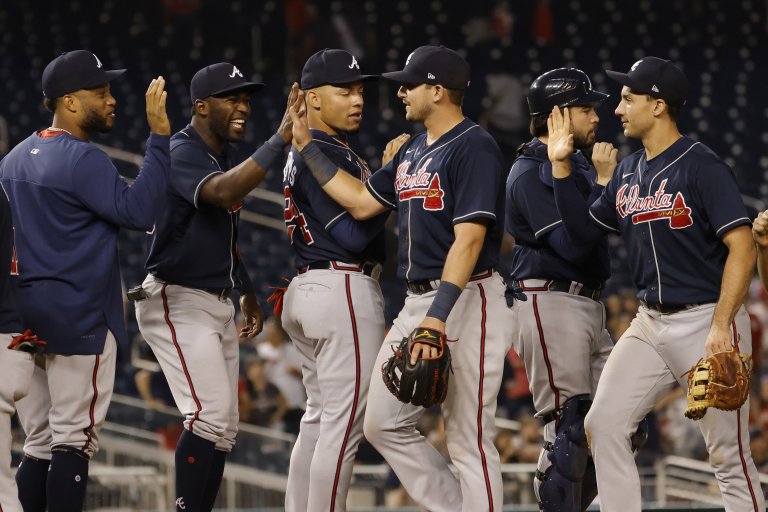 The Atlanta Braves and Washington Nationals face off at Nationals Park on Sunday, July 17th
Defending World Series champion Atlanta is nipping at the heels of New York in the NL East standings, while Washington owns the worst record in baseball
Read below for the Braves vs Nationals odds and betting preview

The Atlanta Braves (56-37) face the Washington Nationals (30-63) on Sunday at Nationals Park. The finale of a four-game series has a scheduled first pitch of 1:35 pm ET. The Braves will send Spencer Strider to the mound, while the Nats will have a bullpen game.

Odds as of July 16th at FanDuel Sportsbook.

The 23-year-old Strider – who was inserted into Atlanta’s starting rotation on Memorial Day — has emerged as the latest in a line of young, quality arms for the Braves. Brian Snitker’s club has gone 5-4 in Strider’s nine starts over the last six weeks. The former fourth-round pick owns three quality starts over the stretch, with all three coming in his last four outings. Plus, he’s doing things no one has ever done.

Strider is the FIRST ROOKIE in MLB’s Modern Era (since 1900) with 11+ strikeouts and 2 or fewer hits allowed in consecutive starts. pic.twitter.com/BNIzgHqsEK

His most recent start came on Tuesday against the division-rival Amazins, where Strider went 4.2 innings, allowing five hits, one earned run and three walks while striking out eight in an eventual 4-1 win.

Meantime, whomever Dave Martinez sends to the hill on Sunday will be overmatched by a formidable Atlanta lineup. Among the arms with seven or less starts in 2022, only two – Carl Edwards Jr and Paulo Espino – possess sub-4.00 ERAs. A propensity of surrendering the big fly has been an issue.

When you compare Washington’s 4.35 bullpen ERA (in the lower-third among all big league clubs) to Strider’s ridiculous K rate, Sunday’s game shapes up to be a major mismatch on the mound.

The Braves have been red-hot in July, sporting a 12-4 record. That includes three straight over the hapless Nats in this series. Front and center in Atlanta’s offensive assault of late has been third baseman Austin Riley — who was a late addition to the NL All-Star team roster on Saturday.

Meantime, the big news out of the nation’s capital on Saturday was two-time All-Star Juan Soto turning down a 15-year, $440 million contract extension offer from Washington. The Nats have gone 1-13 this month and suffered three straight losing seasons since Soto was the breakout star in the 2019 World Series victory. Now, the team will reportedly entertain trade offers for the young star.

Despite Soto’s fantastic career stats, he’s hitting a career-low .247 this season to go along with 19 homers and 42 RBI in 89 games.

The Nats currently have +100000 odds to win the Fall Classic, while the Braves are at +700 to repeat in the World Series odds.

ATL vs WAS Last 10 Meetings

As noted above, this one is a complete mismatch. The Braves are hot. The Nationals are not. Plus, Atlanta has extreme motivation to keep pace with New York in what should be a captivating division race down the stretch.

Josh Bell has been Washington’s most consistent player this season, slashing .305/.385/.497. But with the Soto news creating a distraction for the club heading into the All-Star break, it doesn’t matter what Bell and Co. do against Atlanta.