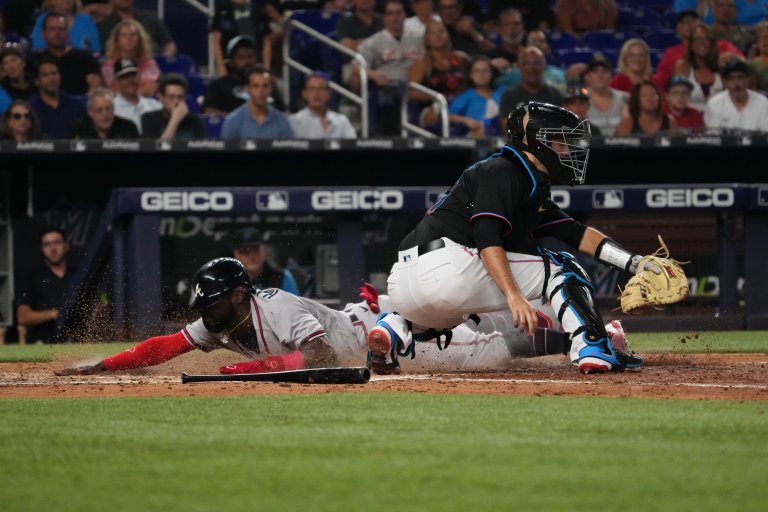 The Atlanta Braves are -120 away favorites over the Miami Marlins in a National League afternoon game slated for Saturday, August 13
It’s the first game of a day/night doubleheader between these NL East rivals
Atlanta is 8-3 straight up in the past 11 road games against the Marlins

The Miami Marlins (50-62, 23-29 home) might be a welcome sight to the Atlanta Braves (66-46, 29-24 away). Atlanta is 4-0 straight up in the last four games against teams from outside the National League East Division. However, the Braves are 3-6 SU in their last nine games against NL East opposition.

When it comes to the Marlins, though, the Braves generally are finding a path to victory. Overall, Atlanta is 5-2 SU in the past seven games against the Marlins. At Miami, the Braves are 8-3 SU over the last 11 games there.

It’s Atlanta that oddsmakers are setting as -120 road favorites in Saturday’s opener of a day/night twin bill. The Braves are 20-13 against the run line as a road favorite this season.

First pitch at loanDepot Park is set for 1:10pm ET on Saturday, August 13. Thunderstorms are in the forecast, with 9 mph wind and a temperature of 89 degrees.

At odds of -120, the Braves are offering an implied probability of victory of 54.55% in the MLB betting line. A successful $10 wager on Atlanta would deliver a payout of $18.30.

The MLB betting trends show that in the NL Division odds, Atlanta is +310 to win the NL East, with Miami set at odds of +4000. The MLB pennant odds show the Braves at +550 to win the NL flag, while Miami is at +100000. Defending champion Atlanta is pulling odds of +1200 to win the World Series odds. You’ll get a betting line of +200000 on the Marlins winning the Fall Classic.

Rookie Braves left-hander Kyle Muller is being recalled from Triple-A Gwinnnett to pitch the opener of this doubleheader. He’ll be making his second MLB start of the season and ninth of his career.

Kyle Muller is being given the ball to start game 1 of tomorrows double header.

Kyle Wright is dealing with arm fatigue and may get his next start skipped.

Muller got the start May 1 at Texas and was shelled by the Rangers. He allowed seven earned runs on four hits and six walks over just 2.2 innings of work.  Location is a big issue for Muller. He hasn’t kept his bases on balls percentage under 12% during a season since 2018, when he was in Double-A.

Muller will be facing the Marlins for the second time. Last season, he got the start against Miami and took the loss. He’s showing a 5.76 ERA against the Marlins.

Marlins left-hander Jesus Luzardo is showing decent numbers everywhere expect in the win column. He’s coming into this game after earning his third win of the season and it was a gem. Luzardo worked seven shutout innings of one-hit baseball on Aug. 7 at the Chicago Cubs. He struck out six and walked won while earning the win in a 3-0 victory.

Injuries disrupted what seems to have been his breakout year. He’s making up for lost time though

With that decision, Luzardo ended a three-game losing skid. The Marlins are 3-5 this season in games in which Luzardo has pitched.

He got the decision in a 5-4 victory over the Braves on April 24. Over five innings Luzardo allowed two hits and one earned run. In two career starts against Atlanta Luzardo is 1-1 with a 5.63 ERA.

Friday’s loss to the Braves meant Miami hasn’t won back-to-back games since July 13-14 against Pittsburgh. The Marlins are 3-10 SU over the past 13 games.