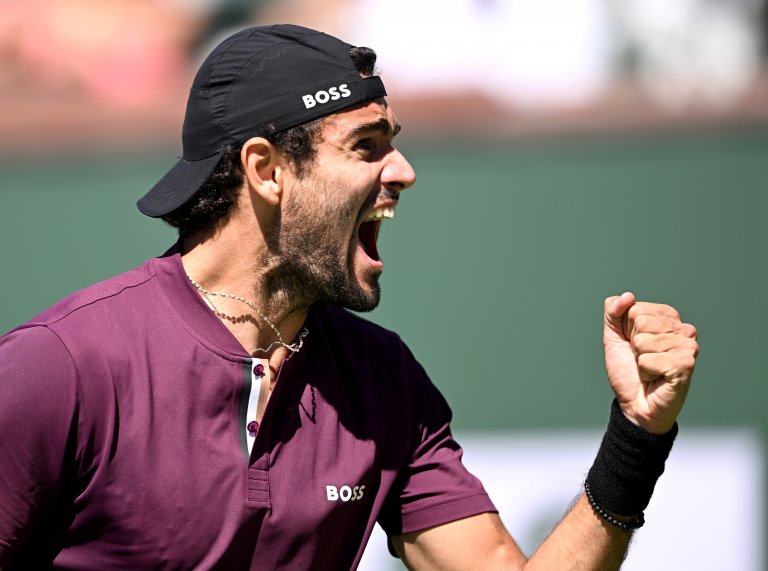 The semifinals of the Cinch Championships will be played Saturday, June 18th
This will be the second meeting between van de Zandschulp and Berrettini
Continue below for odds, preview and best bet prediction

The first semifinal has been set in London as Botic van de Zandschulp and Matteo Berrettini go head-to-head for a spot in the final of the Queen’s Club Championships.

Berrettini has been the favorite since the beginning, coming into the tournament off a Stuttgart Open title win, and an impressive 2021 grass season. It shouldn’t come as surprise that he is here.

Odds as of June 17th at DraftKings.

Again, no surprise here that Berrettini is the favorite heading into this semifinal match. He’s success at the tournament, and against van de Zandschulp

The 26-year old earned his spot in his first grass court semifinal in just one hour and 13 minutes, when he defeated Alejandro Davidovich Fokina 6-2, 6-4.

Van de Zandschulp controlled most of the match, and only lost his serve once against the Spaniard. And in his past two matches, he hasn’t lost a set. It was just his opening match of the tournament, where he saw his opponent take the second set from him.

It’s been in the past year that the Deutchman has begun making a name for himself in the tennis world. It was his run to the quarterfinals of the US Open last year that did that for him, but his run here in London ahead of Wimbledon, is sure to add to that as everyone gears up for the Grand Slam.

Can Berrettini Repeat as Champion?

The Italian has yet to lose since coming back from three months off due to a hand injury and surgery. The 26-year old looked in top form as he defeated his quarterfinal opponent Tommy Paul 6-4, 6-2, to make it back to the Queen’s Club semifinals.

Berrettini had a big of a hiccup in his second round match against Denis Kudla, but regained confidence in the quarterfinals, to solidify the statement that he is in fact the man to beat this week.

As the reigning champion, all eyes were going to be on him. But with his comeback from injury, and winning Stuttgart in his first tournament back, there was no doubt that he’d be the topic of conversation this week.

In his quarterfinal match, he managed to outplay his opponent from start to finish. His serve wasn’t as big as it can be, only recording 3 aces, compared to the 22 he recorded in his round of 16 match. But he was able to win 82% of points on is first serve.

He’ll now to look to face unseeded van de Zandschulp, who he defeated in the early round of Wimbledon last year.

These two players have played each other just once before. In the Round of 64 during 2021 Wimbledon, Berrettini defeated van de Zandschulp in three sets. The Italian went on to be a finalist at the Grand Slam, to wrap up a very impressive grass court season.

The Italian has all the makings to repeat as champion at the Queen’s Club Championships. Yes, he’ll have to get through van de Zandschulp, but with their history, and the tear that Berrettini is on, it seems quite possible.

Berrettini’s serve is his biggest weapon, and it’s not just how hard and how many aces he’s able to record, but it’s the percentage of points he gets off that first serve. More often than not, it 70% or more, and that’s hard to compete with. It makes it pretty difficult for his opponent.

It’s fair to say that grass might be Berrettini’s favored surface, as he’s hard quite a bit of success here. So the best the best would be to give it to him. Look for the Italian to book a spot in the final.