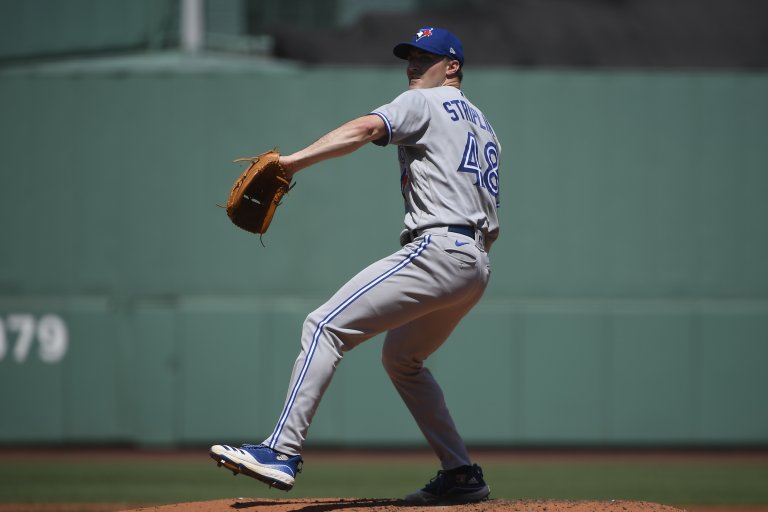 The Blue Jays are -135 road favorites over the Red Sox on Tuesday night
Ross Stripling (5-3, 2.93) will start for Toronto against Josh Winckowski (5-6, 5.19)
A look at the Blue Jays vs Red Sox odds can be found below with a pick

The Blue Jays (65-55, 29-30 road) lost 4-2 to the Yankees on Sunday in New York and had their four-game winning streak snapped. The Red Sox (60-62, 29-30 home) have lost three of their last four games, including falling to the Baltimore Orioles 5-3 on Sunday night in the Little League Classic in Williamsport, PA.

The Blue Jays hold the second AL wild card and are in third place in the AL East, 7.5 games behind the division-leading New York Yankees. The Red Sox are six games out of the third AL wild card.

Odds as of August 22nd at DraftKings Sportsbook.

There is a 30% chance of showers and thunderstorms as the weather forecast calls for a first pitch temperature of 75 degrees, a low of 68, partly cloudy with light and variable wind.

Ross Stripling (5-3, 2.93) is scheduled to pitch for Toronto against rookie Josh Winckowski (5-6, 5.19). Stripling will be working on five days of rest and Winckowski on four.

Stripling came off the injured list last Wednesday and took a perfect game into the seventh inning while beating the Baltimore Orioles in Toronto. He had been out 16 days with a strained right hip but allowed only one hit over 6.1 scoreless innings to go with seven strikeouts and no walks.

After winning his previous two seasons, Winckowski took the loss against the Pirates last Thursday in Pittsburgh. He got tagged for six runs and seven hits in five innings with two strikeouts and one walk.

This will be Winckowski’s first appearance against the Blue Jays, whom he signed with in 2016 after being selected in the 15th round of the draft.

Whit Merrifield hit a home run that bounced twice on top of the fence before going over but it wasn’t enough to keep the Blue Jays from losing to the Yankees on Sunday.

Bogaerts hit a home run, but the Red Sox fell to the Orioles in Williamsport on Sunday night.

The Red Sox hold a slight 15-14 edge over the Blue Jays over the last two seasons.

Stripling is quietly having an outstanding season while Winckowski has had the typical ups and downs of a rookie. Even as a road favorite, the Blue Jays are the way to go here.