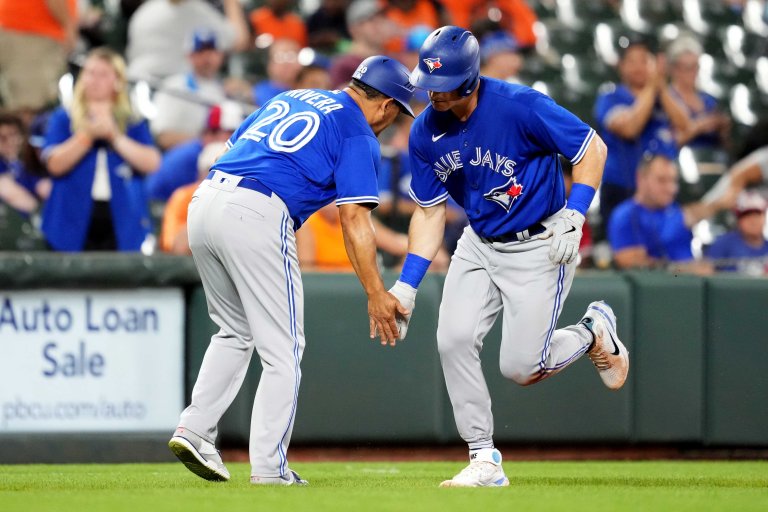 The Toronto Blue Jays and Baltimore Orioles face off at Camden Yards on Tuesday, August 9th
The Jays are perched atop the AL Wild Card standings, while the Orioles have surprisingly flown into the postseason mix this season
Read below for the Blue Jays vs Orioles odds and betting preview

The Toronto Blue Jays (60-49) face the Baltimore Orioles (57-52) on Tuesday at Camden Yards. The opener in a three-game series has a scheduled first pitch of 7:05 pm ET. Toronto will send Alek Manoah to the mound, while the O’s counter with Kyle Bradish.

The Jays are big favorites in this one and have +2100 odds to win the AL East. Meantime, Brandon Hyde’s club has +50000 longshot division odds in the MLB Division odds.

The 24-year-old Manoah has been one of the best pitchers in baseball this season. Toronto has only managed a 13-8 record in his starts, but a whopping 17 of those turns have  been of the quality variety. However since the start of July, the burly righthander owns a comparably pedestrian 3-3 mark with a 3.47 ERA. He got hit with a comebacker off the bat of Jonathan Schoop on July 29th, but X-rays did not reveal a fracture.

After taking a baseball off his pitching elbow last night, Jays athletic trainer Jose Ministral ran out and had a conversation with Alek Manoah. This back and forth is all you need to know about the young man… pic.twitter.com/dLdSS26Vle

He went six innings against the Twins in his most recent appearance last Thursday, allowing just two hits, two earned runs and four walks while striking out five in a 9-3 victory.

Meantime, Baltimore has gone 7-5 in Bradish’s starts in 2022 — a pair of which have been of quality vintage. The 25-year-old rookie missed more than a month of action with a shoulder injury between late June and late July, but he’s looked sharp in two starts since his return as Baltimore is easing him back into the rotation.

Toronto dropped the opener in the series by a score of 7-4 on Monday, but still owns a 10-6 record since the break. Matt Chapman was the offensive star for the Jays in defeat, going 2-for-3 at the plate and launching his 22nd homer of the season.

The Orioles open a lot of games against the Blue Jays with a gritty victory. They hit four homers, the biggest from Ryan Mountcastle, on a loud night. Félix Bautista and Adley Rutschman shared a hug.

Ramon Urias also went yard in the win as the O’s continue to get just enough good pitching with a balanced offense and stack wins.

The Orioles currently have +25000 odds to win the Fall Classic, while the Blue Jays are at +1500 in the World Series odds.

We said Yusei Kikuchi has  been the weakest link on Toronto’s starting staff this season prior to the opener — and that proved to be the case.

Yes, the O’s have taken three of the first four games between these two squads this season. But, behind Manoah — who has been borderline elite in 2022 — I say the Jays bounce back in a big way and take the second game of this important series between division foes and postseason contenders.