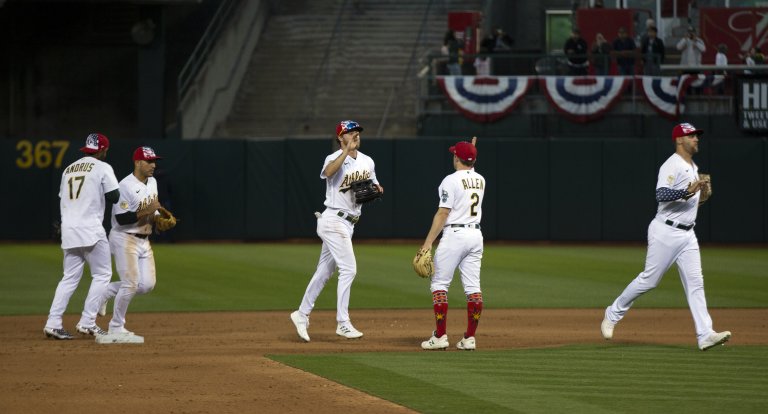 The Toronto Blue Jays are -190 road favorites over the Oakland Athletics in an American League afternoon game slated for Wednesday, July 5
Toronto entered play on Tuesday with a 14-11 straight up slate as a road favorite this season
Get the best bets and Blue Jays vs Athletics odds, below

Depending upon which sample size is analyzed, the Oakland Athletics can feel really good or unbearably sad about how they’re faring against the Toronto Blue Jays.

Entering play on Tuesday, the A’s had won two out of three games from the Blue Jays. However, Toronto had taken the victory in 13 of the past 17 games against Oakland.

Oddsmakers are looking to the larger number as the one worth counting. It’s the Blue Jays who are set as -190 road favorites over the Athletics in the MLB betting line on Wednesday afternoon. The total has gone over in 13 of Toronto’s past 16 games.

First pitch at RingCentral Coliseum is set for 3:37pm ET on Wednesday, July 6. Cloudy skies are in the forecast, with 10 mph wind and a temperature of 77 degrees.

At odds of -190, the Blue Jays are offering an implied probability of victory of 65.52% in the MLB betting line. A successful $10 wager on Toronto would deliver a payout of $15.30.

The public is leaning heavily toward the Blue Jays according to the MLB betting trends. There’s 87% or runline wagers on Toronto, as well as 54% of moneyline bets. The under is drawing 54% of the action.

Blue Jays right-hander Jose Berrios has allowed an American League-high 53 earned runs. He’s surrendered 16 earned runs over his past 11.2 innings on the hill. That’s an ERA of 12.34. Amazingly, he got the win in one of those three starts.

Jose Berrios, the most inconsistent pitcher in the AL pic.twitter.com/XEiJomggMX

Oakland right-hander James Kaprielian is finally off the snide. In his last start against the Seattle Mariners he worked six innings of three-hit ball, allowing one earned run. He counted his first win of the season in the 3-1 verdict by the Athletics. It was his first win since Sept. 18 of last year.

Best pitchers to target to get a HR hit off them

Kaprielian has allowed four or more earned runs in five of 12 starts this season. He’s 0-3 with a 6.45 ERA in five home starts during the 2022 campaign.

The A’s are out to a 3-1 lead over the Jays thanks to a two-run double from Elvis Andrus! pic.twitter.com/8VayLO0mw1

Raimel Tapia is the only Toronto batter to previously face Kaprielian. He’s 1-for-3 (.333) with an RBI.

Berrios is second in the AL in home runs allowed (17), Kaprielian has served up 11 long balls.

The best play on this game is to take the over.