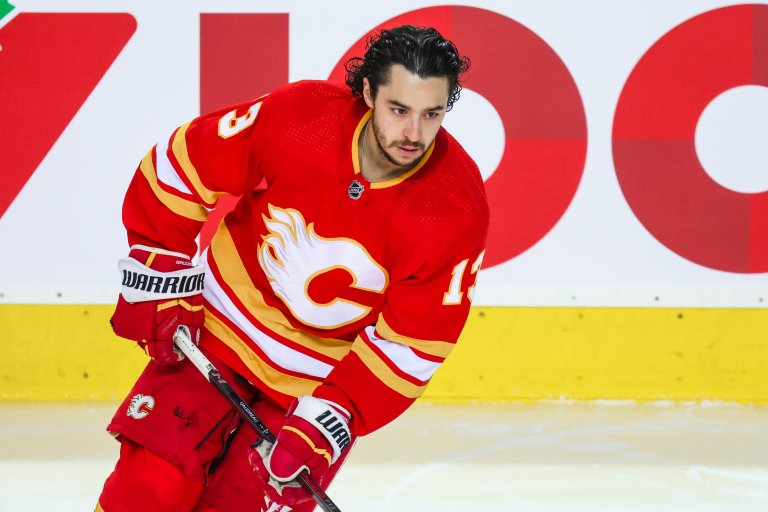 May 26, 2022; Calgary, Alberta, CAN; Calgary Flames left wing Johnny Gaudreau (13) skates during the warmup period against the Edmonton Oilers in game five of the second round of the 2022 Stanley Cup Playoffs at Scotiabank Saddledome. Mandatory Credit: Sergei Belski-USA TODAY Sports

The Columbus Blue Jackets have won the Johnny Gaudreau free agency sweepstakes. Columbus shocked the hockey world when they announced the signing on the opening day of NHL Free Agency (July 13).

Gaudreau has signed a seven-year with the Blue Jackets worth $68.2 million. The 28-year-old announced Tuesday he would not be returning to Calgary after nine seasons spent with the Flames. “Johnny Hockey” reportedly turned down a very lucrative offer from Calgary management.

Gaudreau is from the state of New Jersey, so many speculated he wanted to play somewhere closer to home. The New Jersey Devils and Philadelphia Flyers became frontrunners to land Gaudreau in the NHL Free Agency odds.

Johnny Gaudreau has signed with the Columbus Blue Jackets, per @FriedgeHNIC pic.twitter.com/6GmX2Wt4jU

Gaudreau choosing Columbus is a bit puzzling considering the Blue Jackets have really struggled the last few seasons. If Columbus is going to turn it around, however, signing a superstar like Gaudreau is a great place to start.

Gaudreau is coming off a career-best 115-point season that made him a contender in the Hart Trophy odds. Oddsmakers know Gaudreau’s impact, as they immediately updated the Blue Jackets Stanley Cup odds after the signing went through.

Columbus finished sixth in the NHL East Division last season with 81 points in 82 games. They were 20 points out of a playoff spot. Even after signing Gaudreau, the Blue Jackets have the worst odds (three-way tie) to win the East Division (2023) in the NHL Divisional odds.

The Blue Jackets remain longshots in the Stanley Cup odds because they haven’t won a playoff series since 2019. They also have to re-sign RFA Patrik Laine, which is another reason oddsmakers are hesitant to bolster their betting odds.

Re-signing Laine would give Columbus two elite offensive stars, but they still need to get much better to be considered an NHL contender. The Blue Jackets allowed the fifth-highest number of goals against in 2021-22, which is an area they have yet to improve this offseason.

The Gaudreau signing is huge for Columbus, but it doesn’t mean you should immediately bet the Blue Jackets in the 2023 Stanley Cup odds. CBJ is still lacking elite defense and goaltending, which is something most of the best NHL teams possess.

Johnny Gaudreau is headed to Columbus, just as we all drew it up.

The Blue Jackets add an elite winger and one of the best passers + forwards at generating offense in transition. He’s worth a lot more than that $9.8M cap hit. pic.twitter.com/Lpi2iWaphl

Columbus is worth monitoring in the odds to make the NHL Playoffs, but it’s best to pump the brakes on anything more. Since CBJ entered the NHL in 2000, they’ve only won a single playoff series. It will take a lot more than Gaudreau to change those fortunes in Ohio.

Columbus’ division foe, the Carolina Hurricanes, acquired premier d-man Brent Burns in NHL Free Agency. The Canes are the favorite to win the NHL East Division and are just one of many teams standing in Columbus’ way in 2023.