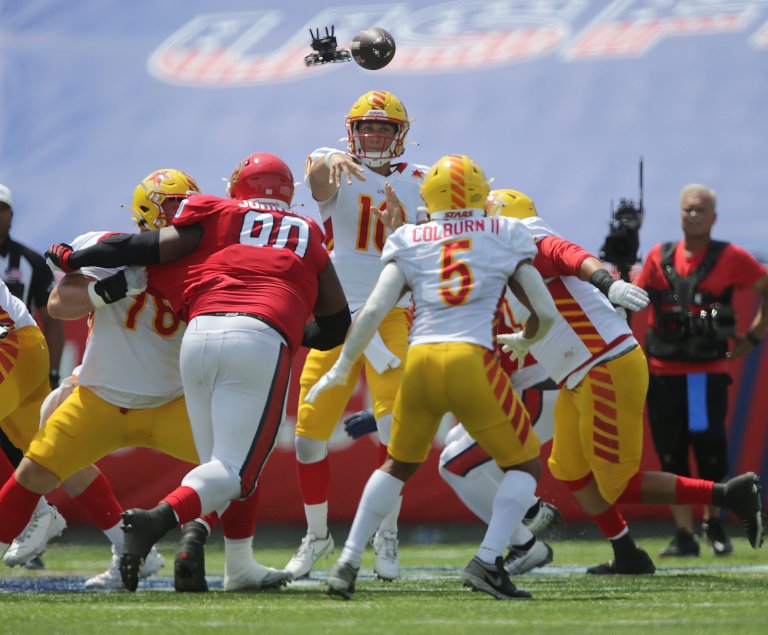 The Birmingham Stallions will clash with the Philadelphia Stars in the USFL Championship Game and because of that, it appears you can add another surety to life. There’s death, taxes and the Stars franchise playing for the USFL title.

Birmingham is appearing in the USFL Championship for the first time and oddsmakers are giving the Stallions more than a pat of the back. It’s the Stallions who are set as 4.5-point favorites to take the title game.

Kickoff for the USFL Championship Game at Tom Benson Hall of Fame Stadium in Canton, Ohio is set for 7:30pm ET on Sunday July 3. The weather forecast is calling for sunny skies, 9 mph wind and a temperature of 90 degrees.

Birmingham comes into the title tilt with a 10-1 record. Philadelphia is 7-4 on the season. FOX is carrying broadcast of the championship game.

In the USFL betting trends, Birmingham is 7-2 against the spread. Philadelphia’s ATS record is 6-5.

From start to finish, the Stallions have set the tone in this second coming of the USFL. Birmingham was a Week 9 loss to the Houston Gamblers away from coming into the final seeking a perfect season.

The Stallions easily whipped the New Orleans Breakers 31-17 in their semifinal. Birmingham put up 21 second-quarter points and cruised from there.

The versatility of the Stallions was on display in that game. Those three second-quarter TDs came from each element of the squad. From the offense, there was J’Mar Smith’s 23-yard touchdown pass to Osirus Mitchell. Linebacker DeMarquis Gates rambled into the end zone after picking off a New Orleans pass. A special teams TD was recorded when Victor Bolden returned a kickoff 90 yards to the house.

THE FIRST KICK RETURN TD OF THE YEAR 🔥@vicbolden CAN FLY 🐎

The defense has been dominating games for the Stallions all season long. Gates was named to the USFL’s All-Defensive Team. His production includes 6.5 sacks and 11 tackles for loss. Birmingham shows a league-leading 27 sacks and is the #2 scoring defense in the USFL, allowing 16.4 points per game.

At 23.4 ppg, Birmingham was the top offense in the USFL’s South Division. Smith is averaging 175 yards per game through the air, third-best in the league. Running back Bo Scarbrough and CJ Marable combined to collect 753 yards rushing.

Two of Philadelphia’s four regular-season losses were handed them by the New Jersey Generals. The Stars avenged those setbacks via a 19-14 semifinal verdict over New Jersey.

An 88-yard punt-return TD by Maurice Alexander with 1:41 left in the fourth quarter provided Philadelphia’s margin of victory. Stars QB Case Cookus completed just 50% of his passes. However, he averaged 9.8 yards per carry on the ground and ran for a TD.

TOUCHDOWN 🥳@CaptainCookus10 takes it himself! 🔥

Philadelphia is the USFL’s #1 scoring offense (26.2 ppg). Despite starting just seven of 10 games, Cookus finished fourth in the league with 1,334 passing yards. The rushing attack of the Stars is averaging a league-leading 5.1 yards per carry.

Philadelphia led the league in scoring at 26.2 per game, almost three points more than any other team in the league. The team’s fortunes changed when Cookus took over at quarterback. He threw for 1,334 yards (148 per game), fourth-most in the USFL, in just seven starts. The Philly backfield averaged a league-best 5.1 yards per carry,

Stallions Should Ride to Victory

The Stars are a gritty, scrappy bunch. That being said, Philadelphia’s semifinal triumph over New Jersey was the first win of the season by the Stars over an opponent with a winning record. Philadelphia was opportunistic against the Generals, forcing three turnovers.

Birmingham’s 10-1 mark includes a 30-17 victory over the Stars. The Stallions running game destroyed Philadelphia when the clubs met during the regular season but the Stars were able to stymie New Jersey’s potent rushing attack in the semifinals.

Look for the Stars to keep this game close. Take Philadelphia to cover.