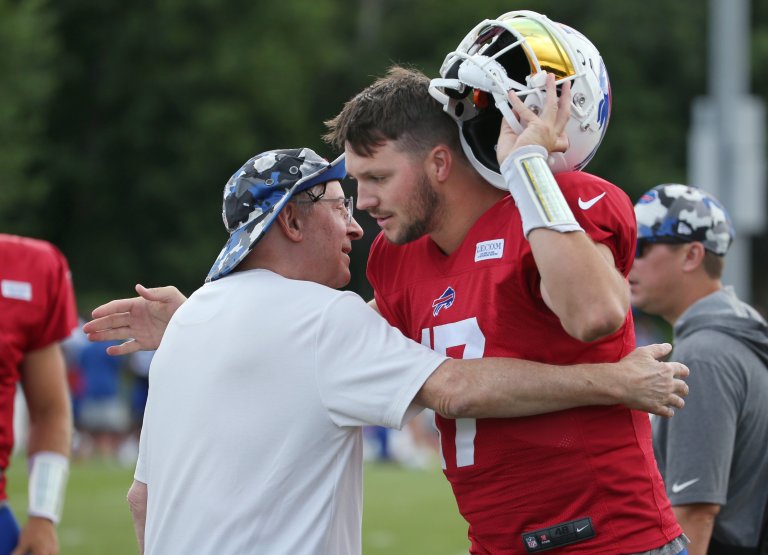 The Buffalo Bills are #1 in the NFL Power Rankings. These Bills are also Super Bowl favorites.

Then why does this all seem to be adding up to bad news?

Supposedly, to be the best, you’ve got to beat the best. But what if you’re thought of as the best, only you keep getting beaten?

Four times in a row, the Bills lost in the Super Bowl. No other NFL team has ever done that. Three times, they did so as the #1 seed in the AFC.

Buffalo is the +600 chalk to win in the Super Bowl odds. Reinforcing the fact that the Bills are an NFL powerhouse, Buffalo is also situated #1 in the SBD against the spread NFL Power Rankings with a league-best rating of -85.

The SBD ATS NFL power rankings differ from traditional power rankings. They factor into the calculation both SBD editor-in-chief Matt McEwan’s NFL strength of schedule calculations, in combination with the +/- of the team’s total betting odds from the opening lines of every game for the 2022 season. This system is rooted in numbers and data and eliminates the element of pure speculation.

History has not been kind to the Bills. Likewise, the NFL betting trends from the SBD ATS NFL Power Rankings are not traditionally kind to the #1-ranked team.

Only one squad started the year at #1 in this category and wound up the season clutching the Lombardi Trophy as Super Bowl champions. The good news for the Bills is that it was another AFC East club. It was the 2018 New England Patriots.

Two of the last three teams to garner the honor of preseason #1 in the ATS NFL Power Rankings – the 2021 Kansas City Chiefs and 2019 Patriots – didn’t even get as far as playing in the Super Bowl.

The Bills take the No. 1 spot on @YahooSchwab’s NFL preseason rankings 👀

Will this finally be Buffalo’s year to win it all? 🤔

Considering the history of the Bills, from Scott Norwood’s wide right field goal at the end of Super Bowl 25, to Thurman Thomas misplacing his helmet at the start of Super Bowl 26, this is a franchise that’s been pursuing a happy ending more fervently than a certain NFL starting quarterback allegedly does.

Then again, considering their history, why should bettors believe that this year will be any different for Buffalo’s NFL team? Is it wise to be expecting Buffalo’s traditionally bad luck in big games will be doing a 180-degree turnaround in 2022?

Why Bills Can Beat the Odds & Win Super Bowl

Can these Bills be the team not to get Buffaloed in the postseason and bring Buffalo its first title since the 1965 AFL Championship? The pieces certainly seem to be in place.

A thing of beauty 🖼

Start with the offense. No NFL player figured in more touchdowns last season than Bills QB Josh Allen. He passed for 36 TDs and ran for another six scores. Buffalo was the NFL’s #1 scoring offense (28.4 points per game).

Buffalo finished the NFL season with the league’s #1 total defense, allowing 272.76  yards per game. The Bills were also #1 in scoring defense (17.0 ppg allowed) and passing defense (163.0 ypg allowed). To that defense they added linebacker Von Miller, a two-time Super Bowl winner and past Super Bowl MVP.

The Bills also posted the NFL’s highest point differential (+194) and the widest average margin of victory (22.09 ppg). All 12 of Buffalo’s victories were recorded by double-digit margins.

Should you be betting on Buffalo in NFL futures? Close only counts in horseshoes and it never counts for the Bills. Last season, Buffalo was 0-6 in games decided by one score. A team can’t count on blowing everybody out. Good teams win close games.

2-Time Super Bowl Champion Von Miller on his message to his new teammates in Buffalo as they embark on what could be a special year….

Buffalo’s defense also might not be as good as advertised. Last season, only six QBs that the Bills faced showed a QBR above 90.8, the league average. This season, they’ll be facing five of the top-10 rated QBs from last season.

Buffalo may be #1 in the NFL Power Rankings but when it comes to winning the Super Bowl, the Bills still aren’t the one.