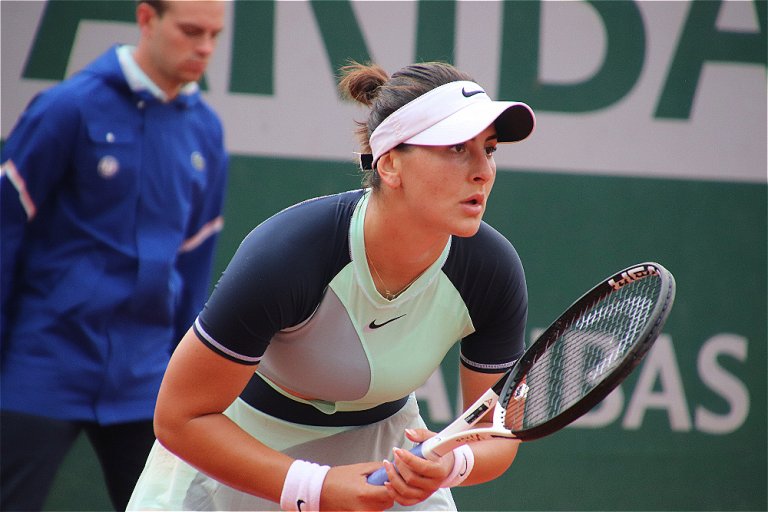 Canadian Bianca Andreescu in action at the 2022 French Open. She makes her 2022 grass-court debut this week at the Bett1Open in Berlin, Germany. (Photo: Stephanie Myles/Opencourt.ca)

A bett1open field that originally had nearly all of the top 20 was decimated by withdrawals
Five of the top 10 still remain, though; Coco Gauff is the favorite to win it all
Scroll down to see why, once again in 2022, the Berlin grass-court tournament will be wide open

Coco Gauff is the favorite to win the bett1open in Berlin this week.

She has never beaten a top player on grass (if you exclude 38-year-old Venus Williams, who was unseeded, at Wimbledon three years ago).

The teenager probably needs more than a week to get over her run to the singles and doubles finals (and disappointment on both fronts) at the French Open.

And yet, there she is at the top of the list.

We don’t think she’ll be the last one standing.

A year ago, in the tournament’s debut edition (the planned 2020 debut was scuttled as tennis was shut down) was won by qualifier Liudmila Samsonova.

And that was with four top-10 players in the field, and all eight seeds in the top 20.

The original Berlin entry list had nine top-10 players (plus Sofia Kenin, with a protected ranking of No. 4). And it had 17 of the top 20.

By the time the event got going, so many had pulled out.

The original Berlin entry list had all of the (then) top-10 except Krejcikova, and No. 4 PR Kenin.
At the moment, Swiatek, Badosa, Kenin, Kontaveit, Collins and Pegula are out.
Along with Azarenka, Rybakina and Fernandez.
Osaka, Kvitova, Anisimova also out.

They still have five of the top 10, but the depth that would have made it an even better tournament than it is kind of fell away.

On the other hand, there are opportunities there for anyone who can get hot this week.

And it’s also true that many others who will see their 2021 Wimbledon points disappear in a few weeks without anything to replace them are putting extra pressure on to try to make points this week.

Once again, Canadian Bianca Andreescu arrives at a portion of the tennis season where she has little to no experience.

When she got to Paris, she came with a total of one French Open main-draw victory.

When she gets to Wimbledon, she will have a total of … zero Wimbledon main-draw wins. She got through the qualifying in 2017 – five years ago. She didn’t get through it in 2018. And she hasn’t been back since.

Andreescu’s game will be great on grass, once she gets experience. But it takes time.

There are plenty of fascinating opening rounds – including No. 1 seed Ons Jabeur versus equally versatile Czech Karolina Muchova.

And worth noting there is that Zheng will have no adjustment time. She just won a WTA 125 tournament in Valencia, Spain Sunday night, on clay. That is an ominously quick turnaround for a young player who has played one career singles match on grass.

If Parks serves well enough and stays calm, she could pull that one off.

Aryna Sabalenka went into self-destruct mode Sunday afternoon in her final in the Netherlands against Russia’s Ekaterina Alexandrova.

She didn’t even get a game in the second set.

Sabalenka has beaten Kudermetova all three times they’ve played – twice in 2021. But Kudermetova is playing a lot better now than then (and made the ‘s-Hertogenbosch semis last week); Sabalenka, just the opposite.

The Canadian’s only win came last summer at Eastbourne, where she defeated Christina Mchale in the first round. At No. 96 at the time, that is Andreescu’s only top-100 win on grass, at any level.

Surprisingly, Andreescu is the favorite.  But we expect it to be hard work.

Even if Siniakova hasn’t looked overwhelmingly healthy or enthusiastic in the last few months, she’s by far the more experienced.