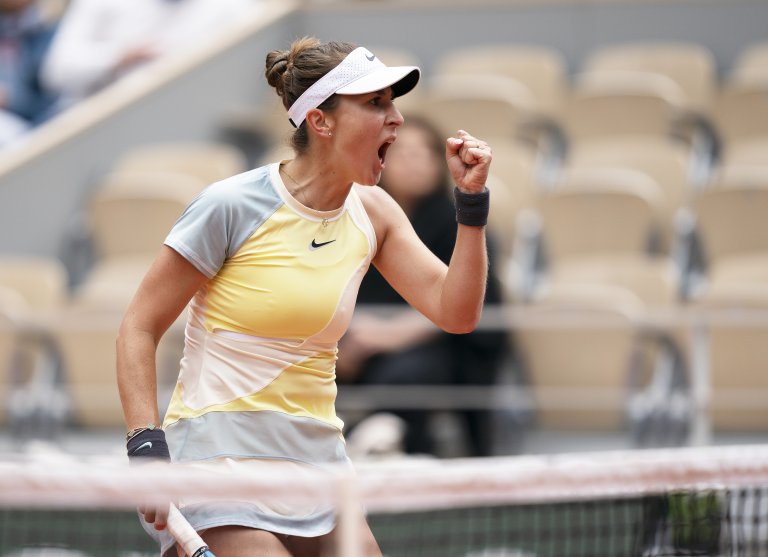 May 27, 2022; Paris, France; Belinda Bencic (SUI) reacts to a point during her match against Leylah Fernandez (CAN) on day six of the French Open at Stade Roland-Garros. Mandatory Credit: Susan Mullane-USA TODAY Sports

No. 2 Maria Sakkari and No. 8 Belinda Bencic meet in the bett1open semifinals Saturday
Sakkari is a slight favorite over Bencic, who made the final last year
With such close odds, we break down the matchup and look for value

It is a first career semifinal on grass for Sakkari, whose previous best results were the quarterfinals at Nottingham in 2019 and this year.

For Bencic, whose winning percentage on grass is the best of the three surfaces, it’s a fifth semifinal at the WTA level.

Odds as of June 17 at BetMGM. Get this BetMGM promo code to use for the bett1open this weekend

It’s also a match to be played on the 10th anniversary of Bencic’s first-ever match on grass, in the qualifying of ‘s-Hertogenbosch June 18, 2012; she was just 15 at the time and still a junior.

The Swiss player, a veteran at 25, reached the final in Berlin a year ago, falling to Liudmila Samsonova of Russia.

She also reached the final in Mallorca in 2019 and won Eastbourne in 2015 in a 48-player draw during which she defeated Madison Keys, Eugenie Bouchard, Johanna Konta, Caroline Wozniacki, and Agnieszka Radwanska in the final.

She can play on the stuff. But she’s still the underdog in this one.

Grass a Work in Progress for Sakkari

Maria Sakkari was at +900 and Belinda Bencic at +1200 in the pre-tournament odds.

That, even though Bencic was the defending finalist and has a far superior grass-court resumé.

Sakkari has made the third round of Wimbledon twice, but not since 2019. She lost to American Shelby Rogers in the second round a year ago.

But she has expended far less energy than Bencic this week in Berlin.

Sakkari has lost just 14 games in three match wins over qualifiers Léolia Jeanjean and Daria Saville, and No. 6 seed Daria Kasatkina in the quarterfinals.

In contrast, Bencic has been grinding it out.  She has needed three sets to get past wild cards Jule Niemeier and Anna Kalinskaya, and came back from a set down to defeat Veronika Kudermetova in the quarterfinals Friday.

Both Bencic and Sakkari Comeback Queens

The odds are fairly slim on this matchup, which is almost a pick ’em, with Sakkari at -125.

But since both players have shown good mettle in coming back from a set down to win, there’s a tennis prop for that.

That exact prop sits at +333 if you’re feeling adventurous.

It feels like a (small) upset in the making. Except for one thing; we expected Sakkari to have all kinds of trouble beating Kasatkina, but Sakkari made quick work of her even though she had never beaten her before.

Bencic is defending finalist’s points, but that’s not an issue that typically bothers her much. She’s used to playing a lot of tennis, although that’s a lot in her first three matches.

We’re picking a 6-4 first set for Sakkari (+575) on a correct score prop, but expect Bencic to come roaring back to push it to the limit. Because she’s done that an awful lot in her career.

Both are the longer shots to win the whole tournament as Ons Jabeur and Coco Gauff, the other semifinalists to face each other Saturday, both have better odds of winning.