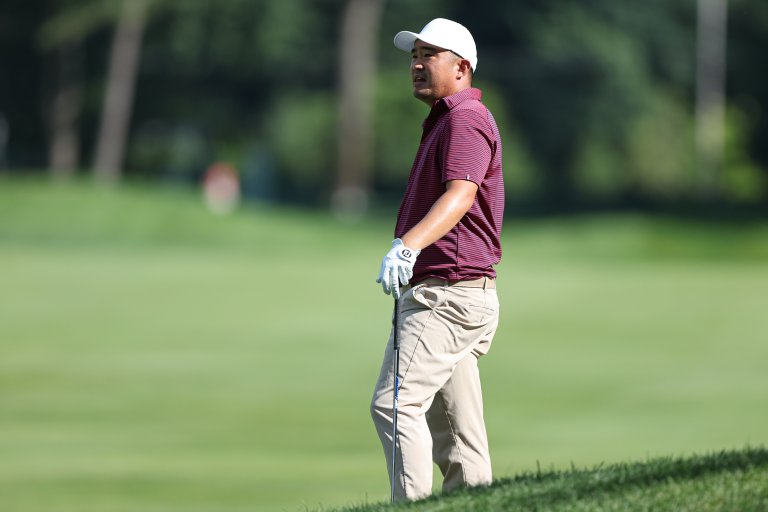 Jun 24, 2022; Cromwell, Connecticut, USA; John Huh looks up after his shot from the fairway of the fourth hole during the second round of the Travelers Championship golf tournament. Mandatory Credit: Vincent Carchietta-USA TODAY Sports

The Barbasol Championship from Nicholasville, Kentucky, tees off Thursday, July 7th
Mark Hubbard is the +3500 favorite to be atop the leaderboard after day one
See the best bets and odds to grab the first-round lead in the article below

The best golfers in the world are teeing it up in the UK this week with Scottie Scheffler leading the way in the Genesis Scottish Open odds. The opposite field tournament, the Barbasol Championship, allows rookies and veterans to take a run at a title against an inferior field.

With most of the golfers competing overseas, there are plenty of opportunities for sleepers and longshots to grab the victory in Kentucky this weekend, as well as in Scotland. The last five iterations of this championship have been tight, with every one settled in a playoff or by a one stroke margin.

In this article, we’ll explore which players have the best chance of being the leader after day one, along with which players have been fast starters on Thursday’s this season. There’s more PGA Tour coverage for first-round betting odds at the Scottish Open.

Odds as of July 5th at DraftKings Sportsbook.

The forecast calls for a mix of sun and clouds in the morning, with a risk of a thunderstorm for the afternoon wave. Temperatures will be in the mid 70’s for those starting in the morning, reaching high 80’s later in the round. It won’t be very windy for the day, with gusts between seven and ten miles per hour, with it a bit windier as the day goes on.

John Huh (8:02am tee time), has been playing strong golf of late, save for a surprising missed cut last week at the John Deere Classic. Before that, he put together a trio of events that resulted in T-12, T-25, T-13 finishes.

Huh hasn’t shot worse than 71 in his last eight Thursday’s, putting together some impressive ‘strokes gained’ stats during those rounds.

In his last twelve combined rounds, Huh is first in strokes gained: tee-to-green and around-the-green, and fourth in total total strokes gained.

Of those competing this week, Lee Hodges (7:07am) has the seventh best scoring average in opening rounds. In four straight tournaments, he’s shot 69 or better, with scores of 69-66-68-68. He has used those strong starts to post four decent results, with all of them being top-50’s.

In those four aforementioned rounds, Hodges has racked up some impressive statistics.

In his last twelve rounds, Hodges is fifth in SG: approach, which should give him plenty of birdie looks. At +6000, his price is very intriguing for a player who has consistently been strong in the early going of tournaments.

Michael Gligic (8:46am) is coming off a strong weekend at the John Deere Classic, which resulted in a T-10th finish. For those 72 holes, the Canadian was fourth in SG: off-the-tee. Like Hodges, he’s also been solid on Thursday’s, ranking fourth best of those teeing it up in Kentucky.

This season, he’s shot 72 or better in his first 18 holes in 16 of 17 instances, including a blistering 64 at the John Deere. He’s seventh in putting and eleventh in total strokes gained the last twelve rounds, plus he had a solid top-20 at this event last year.