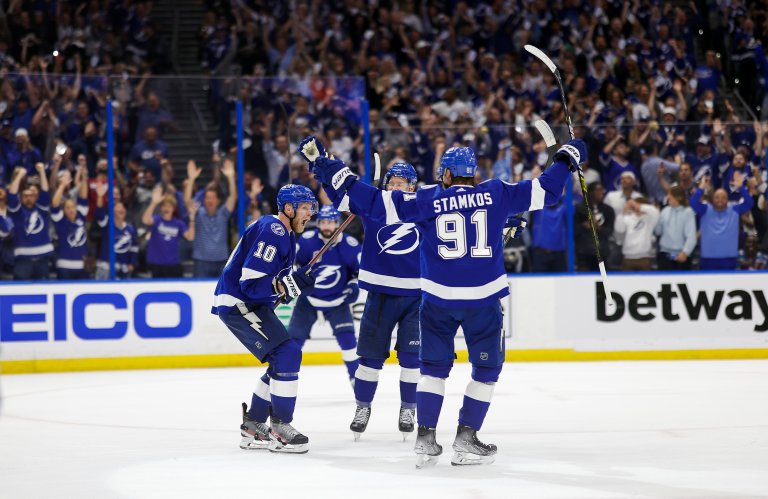 The Colorado Avalanche are -112 road favorites over the Tampa Bay Lightning for Game 4 of the Stanley Cup final on Wednesday, June 22
Bettors can access -107 odds should they choose to bet on the two-time defending champion Lightning
Below, see the Avalanche vs Lightning odds and best bets

The Tampa Bay Lightning got themselves back into the Stanley Cup final series with a solid 6-2 verdict over the Colorado Avalanche in Game 3 on Monday. However, it didn’t seem to impress oddsmakers all that much.

The Lightning are down 2-1 in the best-of-seven series and the betting line on Game 4 while tight, is still favoring the visiting Avalanche at -112. A wager on Tampa Bay comes with -107 odds. The Game 3 win by the Lightning dropped the Avalanche to 7-1 straight up on the road in the playoffs. Tampa Bay is 8-1 SU at home and has won eight in a row.

The puck is slated to drop for Game 4 at 8:00 pm ET at Amalie Arena on Wednesday, June 22. The broadcast is being provided by ABC in the US and by CBC in Canada. Colorado is a  -300 favorite in the Stanley Cup odds. Tampa Bay is at a betting line of +250 to win the Cup for the third year in a row.

Colorado’s seven-game winning streak and perfect 7-0 mark on the road in the playoffs both came to a crashing halt in Game 3.  Avalanche defenseman Cale Makar, the favorite in the Conn Smythe Trophy odds and Norris Trophy odds, will find out if he’s won the latter award on Tuesday. He collected two assists in Game 3.

So, now we’re adding Nikita Kucherov to a list that already includes Brayden Point, Andre Burakovsky and Nazem Kadri and wondering who among them will be able to play in Game 4. That’s an A list, I’d say.

Do the Avalanche Have a Goaltending Controversy?

Darcy Kuemper went from finishing Game 2 allowing no goals to not finishing Game 3 at all. The Lightning snapped Kuemper’s 100:47 shutout sequence and just kept on scoring.

Kuemper was hooked after allowing five goals on 22 shots. Backup Pavel Francouz blocked nine of the 10 shots he faced. Francouz is 6-0 with a 2.81 GAA and .906 save percentage. Look for Colorado coach Jared Bednar to come back with Kuemper for Game 4. But if there’s another lopsided loss for the Avalanche, Bednar might face a tough decision prior to Game 5.

Tampa Bay’s Andrei Vasilevskiy bounced back with a strong game, making 37 saves. He looked like the guy who’s won two Stanley Cups, as well as Vezina and Conn Smythe Trophies.

Andrei Vasilevskiy now ranks 14th All-Time in Playoff wins with 62! He becomes only the 10th goalie in NHL history to win 25+ G with 30+ saves.

He is only 27 years old. Incredible. pic.twitter.com/ECi9LGyujV

Vasilevskiy is 14-1 in his last 15 home playoff starts. He’s 4-0 in his last four Stanley Cup final games at home.

The Lightning are down 2-1 for the third time in four series. Tampa Bay won Game 4 in each of these previous scenarios.

With their backs against the wall, Tampa Bay came out and played its best game of the series, showing the team’s Stanley Cup pedigree. Now it’s Colorado facing the first bit of adversity since the Stanley Cup final began. How will the Avalanche respond in Game 4?