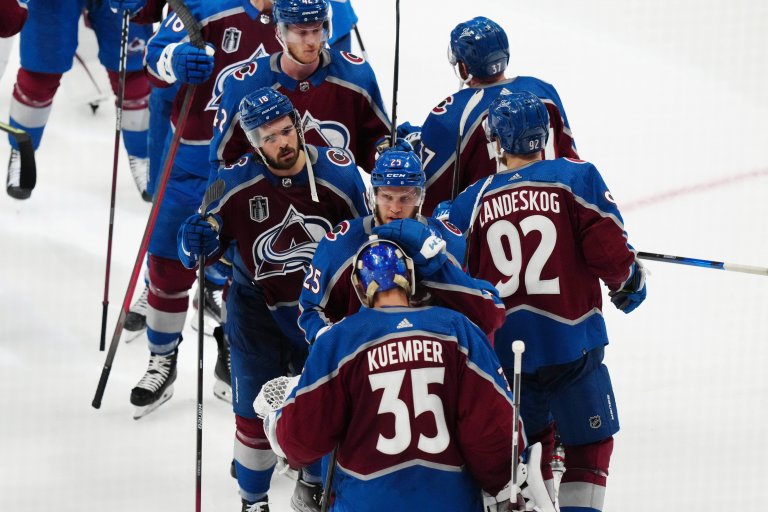 Oddsmakers are setting Game 3 of the Stanley Cup final between the Colorado Avalanche and Tampa Bay Lightning on Monday, June 20 as a pick’em
Both teams have been assigned odds of -110
All of the Avalanche vs Lightning Game 3 odds and best bets are analyzed in the story below

Down 2-0 to the Colorado Avalanche in the Stanley Cup final, about all the two-time defending champion Tampa Bay Lightning have going for them right now is an old NHL playoff axiom.

The one that suggests it isn’t a series until the home team loses a game.

The Lightning were whipped 7-0 in Game 2 at Colorado. But the optimists in the group could also point out that all the Avalanche have done is hold serve by winning their two home games. If Tampa Bay does likewise in the next two games, the set will be all even.

Oddsmakers, though, don’t appear sold on that likelihood. In the odds for Game 3, each team is being assigned a -110 betting line. Colorado is a perfect 7-0 straight up on the road in the playoffs. Tampa Bay is 7-0 SU in its last seven home playoff games.

The puck is slated to drop for Game 3 at 8:00 pm ET at Amalie Arena on Monday, June 20. The broadcast is being provided by ABC in the US and by CBC in Canada. Colorado is an overwhelming -600 favorite in the Stanley Cup odds.

Colorado has won seven games in a row, setting a franchise playoff record. Avalanche defenseman Cale Makar, the favorite in the Conn Smythe Trophy odds and Norris Trophy odds, was the first star of Game 2. He recorded both a power-play and shorthanded goal, becoming just the second defenseman to do so in a Stanley Cup final game.

Cale Makar scored his sixth and seventh goals of the 2022 #StanleyCup Playoffs, surpassing Rob Blake (6 in 2001 & 2002) to establish the franchise record for the most by a defenseman in a single postseason in @Avalanche / Nordiques history.#NHLStats: https://t.co/eT4xFm0QXp pic.twitter.com/EF1rezq6t9

The Lightning are down 2-0 for the second successive series. Tampa Bay came back to beat the New York Rangers in six games in the Eastern Conference final. They also rallied from a 2-1 series deficit to down the Toronto Maple Leafs in seven games in the opening playoff round.

Forward Andre Burakovsky, the Game 1 OT hero, left Game 2 with a thumb injury and is questionable for Game 3. The Avs are without defenseman Samuel Girard (broken sternum). Defenseman Ryan Murray (broken hand) is also out.

Defenseman Brent Seabrook (shoulder) is out for the Lightning.

Darcy Kuemper’s 16-save shutout in the Game 2 victory is a very good long-term omen for the Avalanche. The last six shutouts in Stanley Cup final play were all posted by the team that went on to win the title.

You have to go back to Game 3 of the 2013 final, when Boston and Tuukka Rask blanked Chicago 2-0, to find a zero posted by the team that didn’t win the final series.

Tampa Bay’s Andrei Vasilevskiy has surrendered 11 goals in the series and six goals in the first period of the two games.

The last time he gave up four or more goals in successive playoff games was in Games 1 and 2 of the opening round against the Columbus Blue Jackets. The Lightning were swept in that series.

The Avalanche are the first team to score 11 goals in the first two games of the Stanley Cup final series since Colorado did it in 1996 against the Florida Panthers. The Avalanche swept that series.

Colorado is also the first team to take a 2-0 lead in the Stanley Cup final over the defending champs since Montreal did against Philadelphia in 1976. The Canadiens swept that series.

This will make an interesting storyline for Game 3.#TBLvsCOL | #StanleyCup pic.twitter.com/xKWX27RYZ0

Tampa Bay is the sixth team to face a 2-0 deficit in both the conference final and Stanley Cup final round. None of the previous five won the Cup. Teams that hold a 2-0 series lead in a best-of-seven Stanley Cup final go on to win the championship 90% of the time (47-5).

It feels as though this is Tampa Bay’s last stand. Proud champions coming home, if they are going to get back in the series. a Game 3 win is a must.