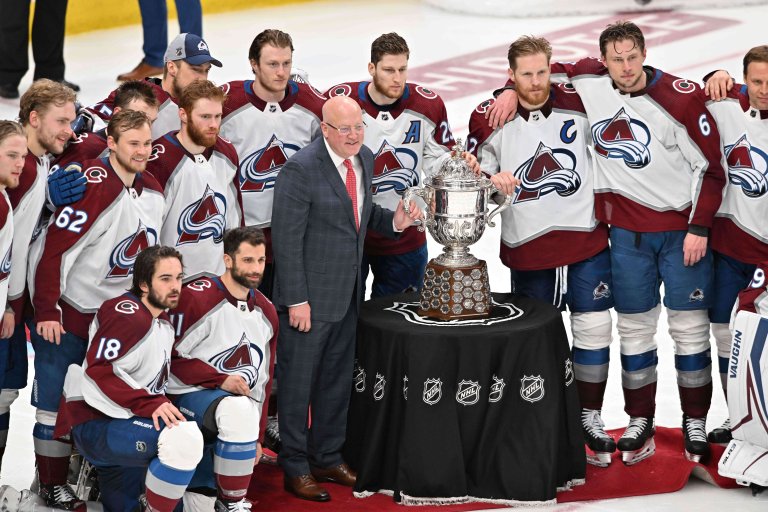 Jun 6, 2022; Edmonton, Alberta, CAN; The Colorado Avalanche are presented the Campbell Bowl after the overtime win in game four of the Western Conference Final of the 2022 Stanley Cup Playoffs at Rogers Place. Mandatory Credit: Walter Tychnowicz-USA TODAY Sports

Four wins away from capturing their first Stanley Cup in more than two decades, the Colorado Avalanche find themselves in the same place that they held when the opening line odds on the NHL championship were released in July of 2021. They are the favorites in the Stanley Cup odds.

The only thing that’s changed is how much shorter those odds have grown.

Winners of the Western Conference championship after sweeping aside the Edmonton Oilers on Monday via a 6-5 overtime verdict, the Avs are heading to the Stanley Cup final for the first time since 2001. And they are doing so as the -210 favorite in the Stanley Cup odds.

Colorado won the Stanley Cup in the spring of 2001. The Avalanche defeated the New Jersey Devils in a seven-game Cup final series.

The Avalanche will play either the New York Rangers or the two-time defending Stanley Cup champion Tampa Bay Lightning in the Stanley Cup final. The Rangers currently lead the best-of-seven Eastern Conference final; between those two teams 2-1.

At odds of -210, the Avs offered an implied probability of lifting Lord Stanley’s mug as NHL champions of 67.74. A $10 wager on Colorado will return a payout of $14.80 on a winning wager.

Just as the first round of the playoffs continues to be a stumbling block for the Toronto Maple Leafs, the second round of postseason play was where it all was stopping for the Avs. Colorado went out in the second round in each of the three previous playoff years.

The @Avalanche recorded their eighth comeback win of the 2022 #StanleyCup Playoffs, the most by a team in a single postseason since the Stars had nine in 2020.#NHLStats: https://t.co/QRIRdhbUnm pic.twitter.com/1W7h30HrLe

This spring, there was a bit of a hiccup. It took the Avalanche six games to oust the St Louis Blues. Up 3-1 in the series and at home for Game 5, Colorado blew a multi-goal lead in the third period and lost 5-4 in overtime.

Instead of letting the ghosts of second-round failures past haunt them, the Avs went to St Louis for Game 6 and clinched the series with a 3-2 win.

Colorado’s Been There from the Start

The Avalanche are looking to go wire-to-wire as Stanley Cup favorites and win the Cup. On July 9, 2001 when the opening 2021-22 Stanley odds were set, it was Colorado that was listed as the +500 betting choice to win it all.

Heading into the playoffs, Colorado was the +320 choice to take the title. By contrast, the Rangers, currently leading the Lightning in the Eastern Conference final, were offered at opening Cup odds of +2633.

Their current betting line of -210 is the shortest price that’s been offered on the Avs this season.

Is It Avalanche Stanley Cup Time?

It’s appeared that Colorado’s had the pieces in place to win for the past couple of years. Defenseman Cale Makar is the favorite in the Norris Trophy odds. Center Nathan MacKinnon is always mentioned as an MVP candidate when the Hart Trophy odds are discussed at the start of the season.

Something, though, always seemed to get in their way. Last season, they ran into a red-hot Vegas Golden Knights and were swept in the second round. In the bubble in 2020, the Avs were ravaged by injuries and eventually succumbed to the Dallas Stars.

Perhaps those disappointments have hardened the Avs to what it takes to win four rounds of playoffs. This spring, they’ve kept on winning through key injuries to top-four defenseman Samuel Girard and #1 goaltender Darcy Kuemper.

After sending the Canadiens to the 2021 #StanleyCup Final with an overtime winner, Artturi Lehkonen did it again for the @Avalanche less than a year later.#NHLStats: https://t.co/QRIRdhbUnm pic.twitter.com/RfT5SvKqAj

Backup Pavel Francouz is 6-0. The Avs are unbeaten on the road (7-0) in the postseason. Trade-deadline addition Artturi Lehkonen scored the overtime winner to complete the sweep of Edmonton and get Colorado into the final. He did the same thing for Montreal a year ago.

It appears that the stars are finally aligning for this deep, talented squad. The Avalanche are going to win the Stanley Cup. Hopefully, you got action on Colorado when the price was still worth it.