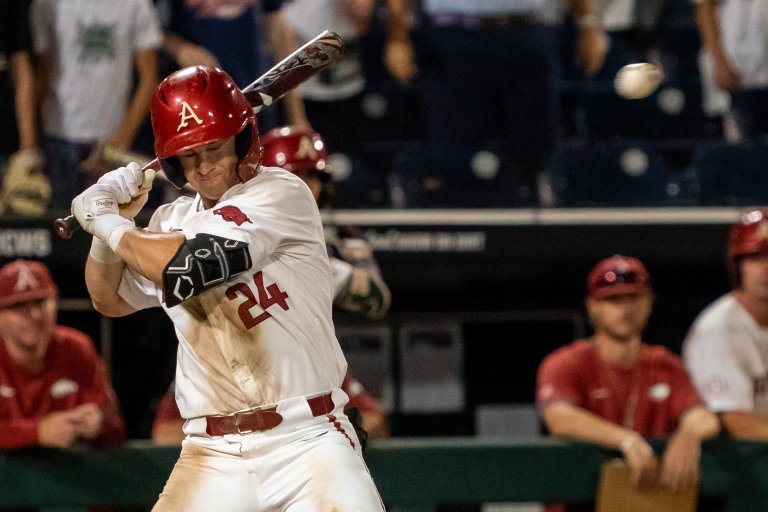 The Arkansas Razorbacks are -125 favorites over the Auburn Tigers in their College World Series game on Tuesday, June 21
Both schools have posted wins in the tournament over the Stanford Cardinal and suffered losses against the Ole Miss Rebels
All of the Arkansas vs Auburn odds and picks are assessed in the following story

The Auburn Tigers (43-21) and Arkansas Razorbacks (43-20) are following familiar paths in the College World Series. They each have tasted victory at the expense of the Stanford Cardinal. And both had fallen victim to the Ole Miss Rebels during the double elimination tournament.

One of the Tigers or Razorbacks will be going home following this all-SEC matchup on Tuesday at the College World Series. Oddsmakers are laying odds that it will be Auburn. Arkansas is set as the -125 chalk to win this game.

The first pitch at Charles Schwab Field in Omaha is set for 7:00 pm ET on Tuesday, June 21. ESPN is providing the broadcast.

Redshirt sophomore right-hander Will McIntire figures to get the ball for the Razorbacks. He’s 1-2 this season with a 2.81 ERA in 11 appearances, including seven starts. In his last start in the NCAA Regionals against North Carolina, McIntire pitched 5.2 scoreless innings in a 4-3 victory over the Tar Heels.

Auburn’s starter is likely to be junior right-hander Mason Barnett.  He’s 3-2 with a 3.98 ERA and 1.46 WHIP. The Tigers have won three of his last four starts.

Down 2-0 to Stanford in the sixth inning on Monday, Auburn came back with a vengeance. Bobby Peirce worked a bases-loaded walk to bring home Auburn’s first run. Next up was second baseman Cole Foster. He laced a double that scored three runs and the Tigers took the lead for good. They’d go on to post a 6-2 victory over the Cardinal.

Foster is so ill he had to leave the Tigers’ loss to Ole Miss. When Auburn is up to bat and Foster isn’t due up, he seeks out refuge from the stifling heat inside the air-conditioned clubhouse.

Auburn’s offense exploded for 51 runs over three games in the NCAA regionals. But the Tigers had been held to two runs through their first 15.2 innings of the CWS before their sixth inning explosion. Brett Burkhalter closed out the game for his 16th save of the season.

Stanford had been 5-0 in CWS elimination games coming into Monday’s tilt. The win was Auburn’s first in the CWS since 1997.

In their opener, the Razorbacks overwhelmed Stanford 17-2. But in the second game of the CWS, it was Arkansas taking it on the chin from Ole Miss by a 13-5 count.

Trailing just 4-3 after two innings, Arkansas was outscored 9-2 the rest of the way. The Razorbacks utilized seven pitchers and five of them surrendered at least two earned runs apiece. Starter Zack Morris didn’t make it out of the first inning.

The winner of this game will get a second crack at beating Ole Miss.  Arkansas and Auburn met in SEC action in a three-game series May 6-8. The Razorbacks took two of the three games.

Over a half-dozen Auburn players are afflicted with a stomach virus. Eventually, that has to take a toll.