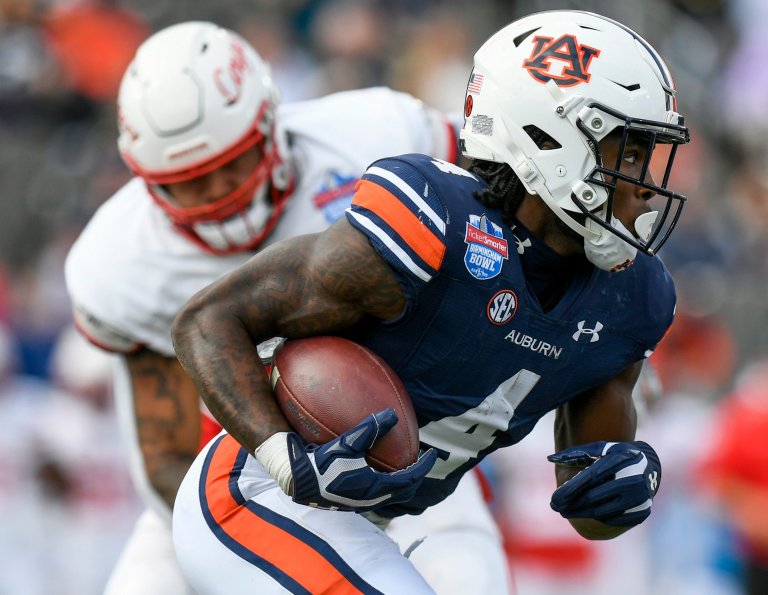 Auburn Tigers running back Tank Bigsby (4) carries the ball against Houston during the Birmingham Bowl at Protective Stadium in Birmingham, Ala., on Tuesday December 28, 2021.

According to SBD’s strength of schedule rankings, no team will face a more difficult schedule this season than Auburn
The Tigers will likely face seven top-25 opponents, and boast a win total of just 6.5
Read below for analysis on Auburn’s schedule, plus a breakdown of their chances to eclipse their win total and win the SEC

No matter who you are, if you play in the SEC, your schedule is going to be a gauntlet. However, if you’re Auburn, it really does look like the deck is stacked against you in 2022.

The Tigers were recently rated the 40th best program in the country heading into next season and could face as many as seven top-25 opponents. That doesn’t leave many opportunities for victories, which explains why their 2022 win projection is so low.

All odds as of July 11th at DraftKings Sportsbook.

Auburn’s 2022 college football win total is set at just 6.5, which is lower than nine of the SEC’s 14 programs. The Tigers won only six games in 2021, and there’s plenty of reasons to believe this year’s team could struggle to even reach that number.

Lots of Value on Auburn Under 6.5

For starters, the Tigers rank first in the 2022 NCAAF strength-of-schedule rankings. They’ll open the season with a pair of cupcake home dates versus out-of-conference opposition, but after that, there isn’t another surefire victory on the schedule.

They have to play both Alabama and Georgia, arguably the two best teams in the country, on the road. Their remaining two non-conference games are no picnic either. They visit a Penn State program in Week 3 that is listed at #16 in the preseason rankings and host a Western Kentucky team that appears to be the cream of the Conference USA crop.

Second-year head coach Bryan Harsin is on the hot seat, not only because Auburn dropped its final five games last season, but also due to how he treats his players and coaches.

SEC Coaching ranking for 2022 by @BarrettSallee

Harsin survived an investigation into his conduct, but the fact that former DC Derek Mason left Auburn for much less money to become the DC at Oklahoma State doesn’t bode well for Harsin’s relationships.

Harsin will also have to break in a new QB after three-year legacy starter Bo Nix bolted for Oregon. That leaves former LSU QB TJ Finley and former A&M pivot Zach Calzada as the primary candidates.

There is a lot of not-so-good Bo Nix, but this play was awesome against LSU.

Interested to see if he’ll start at Oregon and how he’ll do if he does. pic.twitter.com/h731gwZmJw

Finley lost all three of his starts for the Tigers last season, posting a QBR of 38 and taking more sacks (10) than touchdown throws (6). Calzada did start 10 games for the Aggies and beat Alabama, but is viewed as a low-ceiling option. A recent industry poll of QB rooms ranked Auburn third-worst in the SEC.

On the bright side, RB Tank Bigsby is arguably the best runner in the conference and Auburn will return the majority of its offensive line starters. The pass catching group, however, is bare, as their top-two touchdown scorers Kobe Hudson and Demetris Robertson have moved on.

The Tigers’ offense won’t be capable of winning shootouts, meaning their defense is going to have to keep them in games. Easier said than done. They’re introducing a new DC, while their best corner (Roger McCreary) and top-two linebackers (Zakoby McClain and Chandler Wooten) all moved on to the NFL.

Needless to say, not much is expected of the Tigers in the 2022 SEC futures market or in the 2022 National Championship odds. Only two SEC teams have a lower price to win the conference, one of whom is Vanderbilt, who hasn’t had a winning season since 2013.

Stat of the Day:

Mississippi State, Georgia Tech, Vanderbilt, and Tennessee round out the top five.

Auburn hasn’t won the SEC crown since 2013 and is just 17-17 in conference play over the past four seasons. With the most daunting schedule in the nation in front of them, plus legit question marks at QB and on defense, this is not the year the Tigers shock the nation and steal the SEC.