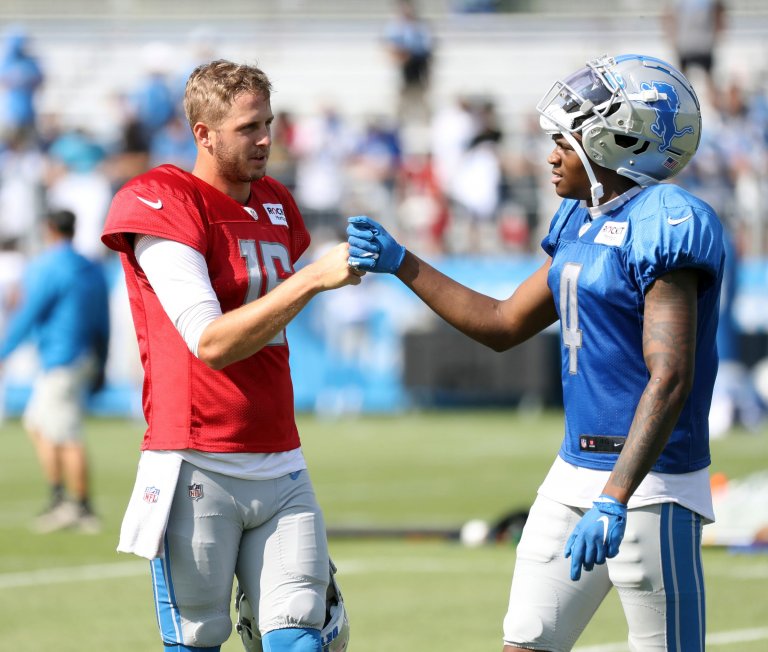 The Atlanta Falcons and Detroit Lions kick-off their preseason on Friday, August 12 at 6:00 pm ET from Ford Field
Both Dan Campbell and Arthur Smith will play their starters in some capacity
See the Falcons vs Lions odds, as well as who could be starting and sitting ahead of Friday

2021 wasn’t exactly a banner year for either the Falcons or the Lions.

Atlanta stumbled to a 7-10 finish in Matt Ryan’s last season with the franchise. While Kyle Pitts emerged as a focal point of the offense, the Falcons lost Calvin Ridley to a suspension for gambling that will see him sidelined for the 2022 season.

The Lions, meanwhile, played with a lot of passion under Dan Quinn, but to minimal results. A 3-13-1 finish marked their second three-win season in three years.

Now, two hopeful teams get their preseasons started on Friday from Ford Field in Detroit at 6:00 pm ET. You can see the game on NFL Network and NFL+.

Odds as of August 11th at Barstool Sportsbook

While the Falcons are favored on the spread, the preseason opener is a pick’em. Both Atlanta and Detroit enter the year with plenty of questions, but Arthur Smith’s side is one of three road teams the spread favors on Friday night.

When it comes to the 2022 NFL win totals however, the Lions have the edge.

Atlanta’s fortunes for both the season and Friday will hinge on who starts under center, though.

The storyline most will be watching when it comes to Atlanta in the preseason is who takes over as starting QB. Matt Ryan spent 14 seasons as the Falcons signal caller, barely missing any time on the field.

Ryan was traded to the Indianapolis Colts for a third round pick this past March though, bringing in Marcus Mariota and Desmond Ridder to fight over the starter’s reps.

Mariota looks polished, accurate. Granted, these are only practices, not games, and he’s going against his own team’s defense. But it’s easy to see why the Falcons believed he could function this season.

When Atlanta released their first depth chart of the summer on Tuesday, Mariota was the QB1. But Ridder impressed during rookie camp, and has had the typical ups and downs of a rookie the past two weeks. PFF named him the Falcons’ rookie to watch for obvious reasons, and believe he’s the most NFL-ready QB of his class.

Smith has said both QBs, along with Feleipe Franks, will see the field on Friday. But for how long, and with who, is the question.

Mariota is the known commodity, and will likely need fewer looks. That said if Pitts, Bryan Edwards and Cordarrelle Patterson see the field, it’ll be with him.

Drake London has been an absolute madman out at #Falcons camp. He’s been the clear cut best player on that offense pic.twitter.com/zUFMA9q1gZ

But if Ridder gets in there with fellow rookies Drake London and Tyler Allgeier, we could see fireworks later on. London, the team’s first round pick, should get reps with both QBs.

Dan Campbell has offered up a little more when it comes to his plans of who to play on Friday. He told reporters that he intends to give the first teamers the whole first quarter.

Preseason or not, that’s good news for the Lions.

How could you not want to play for Dan Campbell pic.twitter.com/t7bERi2zHQ

If Campbell is true to his word, then Jared Goff will get some time to work with fantasy sweetheart Amon-Ra St. Brown , DJ Chark and TJ Hockenson. That also means we can expect some D’Andre Swift.

Atlanta invested three Day 2 picks on draft weekend in the front seven in hopes of fixing up their run defense. They were ok against the pass last year, but struggled mightily on the ground.

While that plan should pay dividends down the road, it could get off to a bumpy start trying to stop 15 minutes worth of Swift.

Not to mention if Jamaal Williams has anything to say about it.

Right when you think Hard Knocks has been trash the last half-decade, in comes Jamaal Williams to possibly save the day. pic.twitter.com/xhcULjaTuM

Preseason or not, homefield advantage is real when it comes to NFL betting strategies. And so are the motivational tactics of Campbell.

The Lions are more settled and more established than a rebuilding Falcons team. While there is promise in Atlanta, there will be growing pains. Detroit went through that last year, and there’s an added motivation to start off on the right foot.

Expect the Lions to get it done on Friday night and to get 2022 started right.