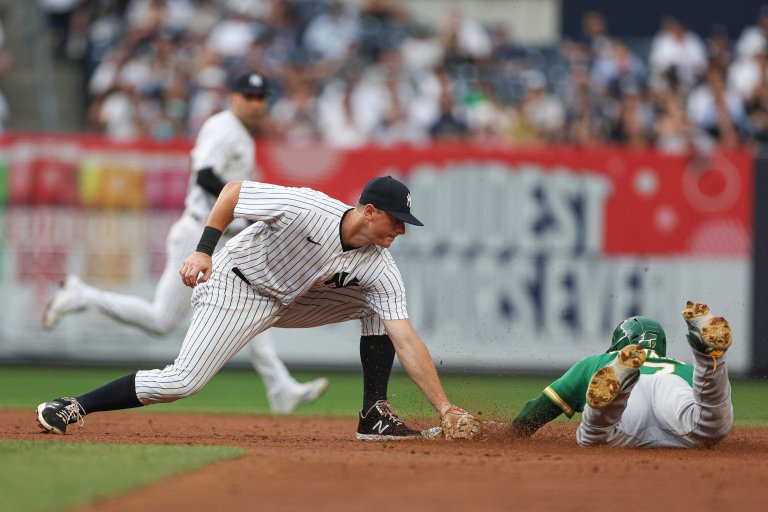 The New York Yankees are -190 home favorites over the Oakland Athletics in an American League game slated for Tuesday, June 28
New York has won the past four series from Oakland that were played at Yankee Stadium
All of the Athletics vs Yankees odds, picks, predictions and best bets are analyzed in the story below

Oakland arrived at Yankee Stadium for a three-game series with the AL East-leading Yankees showing a 6-18 record over the past 24 games. Four of those six victories were earned at the expense of the equally-hapless Kansas City Royals.

To no one’s surprise, New York is set as the -190 home favorite in the second game of this set. The Athletics are 17-21 straight up as a road underdog this season.

First pitch at Yankee Stadium is set for 7:05pm ET on Tuesday, June 28. Clear skies are in the forecast, with 6 mph wind and a temperature of 81 degrees.

The public is split when it comes to backing a winner in this game. Moneyline wagering is showing 54% backing the Yankees. Meanwhile, a whopping 82% of runline bets are supporting the Athletics. Public bets are also going with the over to the tune of 88%.

The MLB betting trends show that in the AL Division odds, a favorite’s betting line of -240 is available on the Yankees to win the AL East. The MLB pennant odds show the Yankees at +200 to win the AL flag. New York is at +425 to win it all in the World Series odds.

Sixth in AL Cy Young Award voting a year ago, the woes of the A’s are impacting the work of right-hander Frankie Montas. On paper, his numbers are actually better in a lot of intances than in 2021, when he went 13-9.

Montas is 1-6 in his last seven decisions. In his last start he went eight shutout innings against the Seattle Mariners, allowing two hits. He didn’t figure in the decision, a 2-1 Oakland loss.

Against the Yankees, Montas is 1-0 in two  appearances, including one start, with a 0.00 ERA. His pitched one scoreless inning in relief at Yankee Stadium.

In three MLB appearances, including one start, rookie left-hander JP Sears has yet to allow a single run. Over seven innings pitched he’s struck out seven and allowed five hits. Sears rates among the top 5% among MLB pitchers in max EV (101.4).

This will allow the rotation to get some rest. #Yankees

Sears made two relief appearances in April and got his first big-league win in relief against Baltimore in a 5-2 road victory on April 16.

Recalled from Triple-A Scranton/Wilkes-Barre, Sears made his first MLB start May 25 at home against the Orioles. Working five innings, he allowed three hits and struck out five in a 2-0 victory. He’s being recalled again to make another spot start on Tuesday.

JOSH DONALDSON FOR THE LEAD pic.twitter.com/keMH3olU1S

No Oakland batter has ever faced Sears in an MLB game.

Montas is certainly deserving of a better fate this season than his record is indicating. He’s been solid in his career when facing the Yankees and was sensational in his last start against the Mariners.

Marwin Gonzalez tacks on another run for New York with an RBI single to right-center! When it rains, it pours in the Bronx. #RepBX #DrumTogether #Yankees #Athletics #MLB pic.twitter.com/gxtcNPB9gH

How many times can New York go to the well with Sears before he gets roughed up?