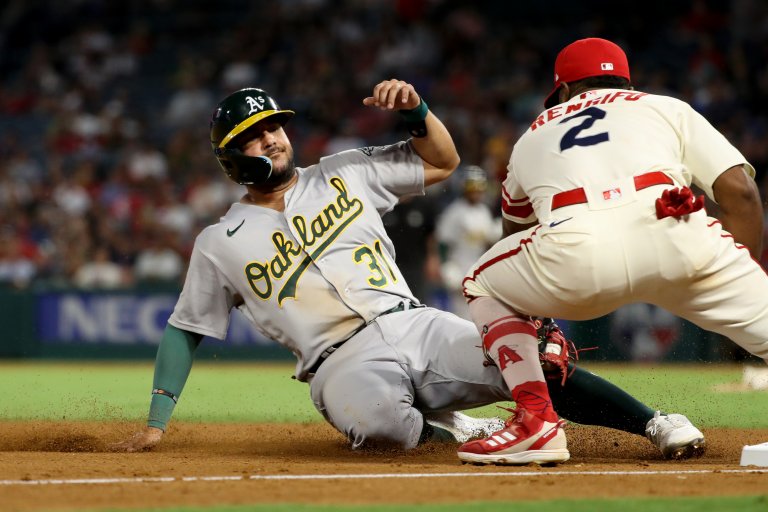 The Angels are -120 home favorites over the Athletics on Thursday
Paul Blackburn (6-6, 4.15) will pitch for Oakland against rookie Janson Junk (1-0, 0.00)
A look at the Athletics vs Angels odds and matchup can be found below with a prediction

The Oakland Athletics visit the Los Angeles Angels at 4:07 p.m. ET Thursday in the decisive game of their three-game series at Angel Stadium in Anaheim.

Odds as of August 3rd at Caesars Sportsbook.

It should be a beautiful day in Orange County with sunny skies, an expected high temperature of 83 degrees, and southwest wind at 5 mph.

Paul Blackburn (6-6, 4.15) is scheduled to start for the Athletics against rookie Janson Junk (1-0, 0.00). Blackburn will be pitching on four days of rest and Junk on seven.

Blackburn has struggled lately, going 0-4 with an 8.05 ERA in his last seven starts.

However, Blackburn pitched five shutout innings against the White Sox last Saturday in a no-decision at Chicago. He gave up four hits, did not walk a batter and struck out four.

Junk will be making his second start and third appearance of the season for the Angels.

He tossed five scoreless innings to beat the Royals in his last start July 27 at Kansas City. The Royals got four hits off Junk, who had eight strikeouts and one walk.

This will be Junk’s first-ever appearance against the Athletics.

He has pitched once at home and in the day this season, working one scoreless inning May 28 against the Toronto Blue Jays. The Angels are 1-1 when Junk pitches.

The Angels’ Shohei Ohtani is 2 for 5 against Blackburn with a double. Ohtani’s +350 AL MVP odds are second to the -380 of the New York Yankees’ Aaron Judge.

Sean Murphy homered and drove in all three of his team’s runs to lead the Athletics to victory Wednesday night. The home run was a two-run shot in the sixth inning that broke a 1-1 tie.

Vimael Machin went 2 for 2 for Oakland.

Mickey Moniak started in center field for the Angels a day after being acquired in a trade with the Philadelphia Phillies. The rookie went 0 for 2.

North County native Mickey Moniak on joining the Angels and likely playing a lot: “The one thing I (want) is an opportunity, and to be so close to home with family and friends, it’s just the cherry on top. My family’s fired up. All my friends, grandparents, aunts, uncles.” pic.twitter.com/JuPpnvdP3A

The Angels are 6-3 against the Athletics this season, including 3-2 at home. The Athletics held a commanding 34-14 advantage in the series over a three-year span from 2019-21.

Though Blackburn hasn’t won in a while, he has been very good on the road this season and is facing a lineup weakened by Mike Trout being on the injured list. Let’s lean toward the Athletics.