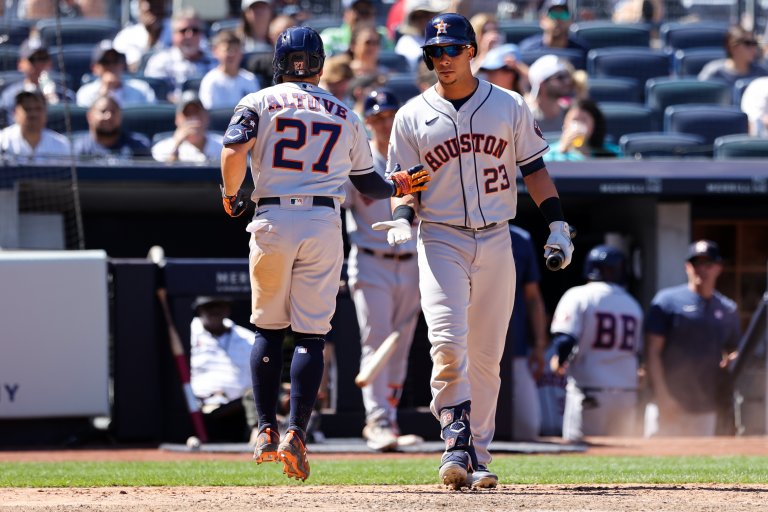 The Houston Astros and New York Yankees face off at Yankee Stadium on Sunday, June 26th
Dusty Baker’s club is trying to make another deep postseason run, while Aaron Boone’s group has the best record in baseball
Read below for the Astros vs Yankees odds and betting preview

The Houston Astros (45-26) face the New York Yankees (52-20) on Sunday at Yankee Stadium. The finale of the four-game series has a scheduled first pitch of 1:35pm ET. The ‘Stros will send Jose Urquidy to the mound, while the Pinstripes counter with Nestor Cortes.

The Yankees are favorites in this one and own the second-shortest odds of any team in baseball to win its division at -1250. Meantime, the Astros have the shortest odds to capture a division title at -2500.

Odds as of June 25th at FanDuel Sportsbook

The 27-year-old Urquidy has been quite a find for Houston. The Astros have gone 9-4 in the Mazatlán, Mexico native’s 13 starts — five of which have been of the quality variety. The good news for Baker and his bullpen? Three of Urquidy’s last four outings have been quality ones — including Tuesday’s against the Mets.

José Urquidy threw a career-high 104 pitches. He did a terrific job, really, allowing one run and four hits in six innings to one of the best offensive teams in the league.

The righty went six innings against the Amazins, allowing four hits, an earned run and a walk while striking out five in the 8-2 victory.

Meantime, fellow 27-year-old Cortes has become a folk hero in Gotham. New York also owns a 9-4 mark in the former 36th rounder’s turns, five of which have been quality ones. Cortes was especially dominant in May, going 3-1 with a 1.95 ERA — including a pair of eight-inning efforts. He’s tailed off a bit of late, failing to complete six innings in his last three starts, going 1-2 with a 5.79 ERA in that timeframe.

Nestor Cortes Jr. has allowed only 19 hits off his cutter this season (in 113 at-bats ending in a cutter).

Cortes got roughed up in his last outing on Tuesday, going 4.1 innings and allowing six hits (three of which were homers), four earned runs and no walks while striking out three in a 5-4 loss to the Rays.

The Astros have snatched back momentum in this series of baseball’s two heavyweights in a major way. After AL MVP favorite Aaron Judge walked off the Pinstripes on Thursday in a 7-6 New York victory, Houston’s pitching has taken over. The visitors beat the home team 3-1 on Friday. Then on Saturday, Cristian Javier, Hector Neris and Ryan Pressly combined to no-hit the Bronx Bombers.

As for the ‘Stros offense, it’s been a different hero in all three games. Prior to blowing a 6-3 in the bottom of the ninth on Thursday, Alex Bregman launched a three-run, first-inning homer. Then on Friday, it was Kyle Tucker’s turn to blast a three-run bomb. On Saturday, Jose Altuve and JJ Matijevic hit solos shots.

Meanwhile, the Yankees have been led by Judge. The free-agent-to-be is slashing .295/.369/.638 and has hit an MLB-leading 27 homers with 53 RBIs. He’s far from the only offensive threat in this formidable lineup, though. Anthony Rizzo, Giancarlo Stanton and Gleyber Torrest have all also hit at least 13 big flies and driven in at least 32 runs. But the big 30-year-old has clearly been a step above everybody in the game this season.

The Bronx Bombers currently have +475 odds to win the Fall Classic, while Houston is at +700 in the World Series odds.

Take away a four-run ninth inning on Thursday, and Baker’s boys have held Boone’s vaunted lineup to just four runs over the last three games. That kind of domination is hard to expect for a fourth straight game.

But Houston’s pitching – led by Urquidy – might be up to the task of at least keeping New York at bay enough to come away with a win on Sunday and an unlikely series victory.