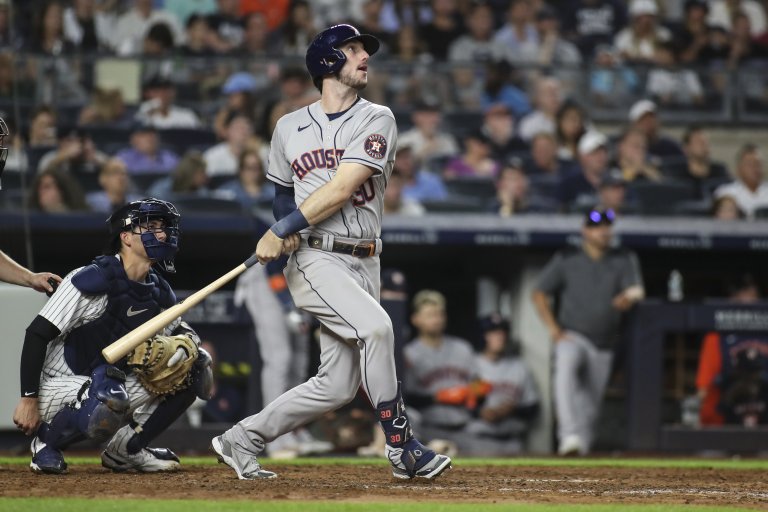 The Yankees are -162 favorites over the Astros on Saturday
Cristian Javier (4-3, 3.07) will start for Houston against Gerrit Cole (6-1, 3.14)
A look at the matchup and odds can be found below with a pick

Two division leaders meet again when the Houston Astros visit the New York Yankees at 1:05 p.m. ET Saturday at Yankee Stadium in the third game of a four-game series.

The teams have split the first two games and the American League West-leading Astros (44-26/24-15 road) won 3-1 on Friday night for their fourth victory in the last five games and seventh in their last nine. The Yankees (52-19/30-8 home), who are in first place in the AL East, lost for just the fourth time in their last 23 games.

Odds as of June 24th at Barstool Sportsbook.

The weather forecast calls for sunny and a high temperature of 88 degrees in the Bronx with wind from the south at 5-7 mph.

Javier is coming off a win last Sunday against the Chicago White Sox in Houston. He allowed one run and two hits in five innings while striking out five and walking four.

This will be Javier’s second career appearance and first start against the Yankees. He pitched three scoreless innings of relief last season in Houston.

Javier is 1-1 this season with a 4.63 ERA in six road games (four starts). He has pitched twice in the daytime, both relief outings, and worked a total of six shutout innings.

Cole is 2-0 with a 2.83 ERA in his last five starts and flirted with a no-hitter in his most recent outing.

Cole held the Rays hitless into the eighth inning Monday at Tampa Bay. He wound up with a no-decision despite giving up only one run and one hit in 7.1 innings with 12 walks and three strikeouts.

In three career starts against the Astros, one of Cole’s former teams, he is 1-1 with a 3.00 ERA.

7 IP and no hits for Gerrit Cole. ? pic.twitter.com/s2cZIyWFNB

The Astros’ Yordan Alverez is 2 for 7 off Cole and both hits have been home runs. However, Cole has been a tough matchup for Michael “Dr. Smooth” Brantley, who is 2 for 15 off the big right-hander.

Joey Gallo has only one hit in 12 at-bats against Javier for a .083 batting average.

Center fielder Jake Meyers made his season debut for the Astros and went 0 for 3 with three strikeouts. He injured his left shoulder last October in the American League Division Series against the Chicago White Sox and needed surgery.

Rookie shortstop Jeremy Pena could return to the Astros’ active roster Saturday. He has been out since June 13 with a left thumb injury.

Aledmys Diaz, who had been filling in for Pena, returned to action after missing four games with left shoulder soreness.

The Yankees got their run on a home run by Giancarlo Stanton. DJ LeMahieu had two hits for New York.

The series has been contested on close terms in recent years with the Yankees holding a slight 15-13 edge since the start of the 2018 season.

The Astros lineup is a difficult matchup for any pitcher. However, Cole is tough to beat, especially at home in a day game, so the Yankees are the play in this one.