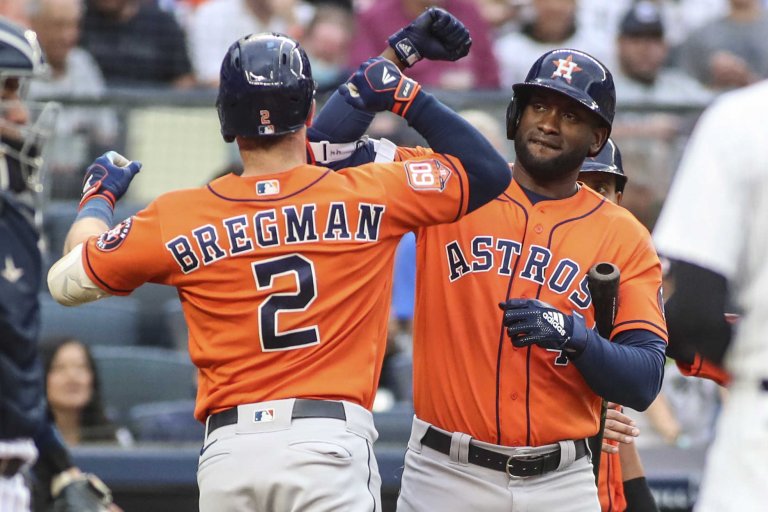 All eyes will be on a pair of marquee series this weekend in the Majors. In the NL, the defending champion Braves take on the 2020 champion Dodgers. Over in the AL, the 2017 champion Astros visit a Yankees team that is off to the best start through 70 games since the 2001 Mariners.

Houston took the series opener against New York on Thursday, but oddsmakers are expecting a different result in Game 2.

New York opened up as -120 moneyline favorites, in a contest that features a total of 7.5. First pitch is scheduled for 7:05 pm ET at Yankee Stadium in the Bronx, NY, with clear skies and 76 degree temperatures in the forecast.

The Yankees, who are co-favorites with the Dodgers in the World Series odds, will send Luis Severino to the hill. Severino is fresh off allowing five runs and two homers to the Blue Jays on Sunday in a 10-9 defeat.

That outing is a hiccup in an otherwise fantastic season. The 28-year-old has allowed one run or less in four of six starts, and is 3-0 at home in 2022.

If you’re looking for reasons to fade him however, his track record versus the Astros is not strong. Severino has issued a .327 batting average to current Houston hitters over 58 at-bats, with a .726 slugging percentage.

The Astros will counter with Justin Verlander, a top-two contender in the AL Cy Young odds. Verlander has been dominant for the majority of the campaign, but like Severino is not immune to bad outings.

Most starts allowing 0 earned runs this season (all MLB)

Last time out he coughed up seven runs and nine hits over 3.2 innings to the White Sox, which marked the second time in five starts he’s yielded at least six runs.

He hasn’t faced the Yankees since the 2019 season, but he does have a strong history of success against them. He’s held current New York hitters to a .158 batting average over 134 at-bats, with 34 strikeouts.

AL MVP odds favorite Aaron Judge and Giancarlo in particular have struggled over their careers versus Verlander. The bash brothers are 3-for-19 against the two-time Cy Young winner, with nine strikeouts.

The way Judge is swinging the bat this year though, I’d be hesitant to put too much stock into that. He’s fresh off his sixth multi-home run game of the season, joining Babe Ruth as the only two Yankees to accomplish that feat through 70 games.

Aaron Judge joins Babe Ruth in 1928 as the only Yankees with 6 multi-HR games within the team’s first 70 games of a season. pic.twitter.com/O3fWYsARZh

He leads MLB in home runs, total bases and slugging, while ranking third in OPS and sixth in WAR. New York continues to be the highest scoring team in baseball, and the league leaders in home runs, slugging percentage and OPS.

Not to be outdone, the Astros lineup is coming on after a slow start. They’re averaging six runs per game over the past week, putting up an OPS of .883 during that stretch which is 114 points higher than the Yankees season long mark.

Yordan Alvarez has smacked 10 home runs in 21 games, and trails only Judge in that category. He leads MLB in OPS, while Alex Bregman is finally showing signs of life. Bregman, a former 40-homer man, has gone deep in back-to-back games after hitting just six dingers combined through the first two months of the season.

Houston’s improved offensive numbers have led to the majority of their recent games soaring over the total. 11 of their last 16 games have produced at least eight runs, while the bulk of their last 10 meetings with New York have been high scoring as well.

Entering play on Thursday night, seven of their previous 10 matchups reached at least nine runs, and Thursday’s contest did as well.

Yes, both Verlander and Severino are capable of neutralizing the competition, but each has also shown vulnerability against good offenses. Houston is the one of the hottest lineups in the game at the moment, while New York is loaded with talent from hitters one through nine.