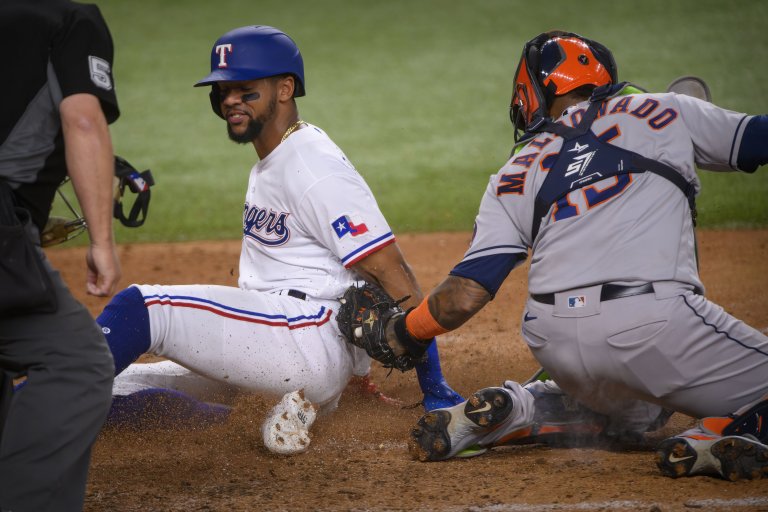 The battle between the AL West’s top two teams continues on Wednesday in Arlington. Houston and Texas will wrap up a three-game set in what will be their 11th meeting already this season.

The hometown Rangers took the series opener, but the Astros bounced back in Game 2. Oddsmakers are expecting another Houston victory in the finale, as they’ve been pegged as the road chalk.

The Astros opened up as -155 moneyline favorites in a contest that features a total of 8.5. First pitch is scheduled for 2:05 pm ET at Globe Life Field in Arlington, TX, with a sun-cloud mix and 95 degree game-time temperatures in the forecast.

The Astros, a top-three World Series odds contender, will give the ball to the struggling Luis Garcia. The right-hander has dropped four straight decisions and is fresh off his worst outing of the season.

Garcia coughed up five hits, five runs and three homers last time out, lasting only 4.1 innings against the light-hitting Marlins. He hasn’t posted a victory since May 12th, but a date with the Rangers may be just what he needs to get back on track.

Garcia is 2-0 in two career starts versus Texas, with a 1.74 ERA. He’s held current Ranger batters to a .250 average over 20 at-bats, and this Texas lineup isn’t exactly one to fear – more on that later.

The Rangers meanwhile, have yet to name a starter as of 10:30 am ET on Thursday. It was supposed to be Glenn Otto’s turn in the rotation, but the right-hander was placed on the COVID-19 list on June 10th.

Despite a seemingly loaded lineup on paper, Houston has been a disappointment offensively. They’re averaging only 4.11 runs per game, a year after leading the Majors in that category.

Both Alex Bregman and Yuli Gurriel are on pace for career lows in most offensive categories, but one player who’s exceeded expectations has been Yordan Alvarez. A top-six AL MVP odds contender, Alvarez entered play in the midst of a 14-game on-base streak. He’s posted 10 multi-hit games while batting .500 over that stretch, raising his season-long average by .68 points.

Yordan Álvarez has been putting up video game numbers ?

The @astros slugger is 27-54 over his last 14 games ? #LevelUp pic.twitter.com/WX3xdkRWaj

As for Texas, their surprising second place status in the division has not been thanks to its lineup. The Rangers rank below league average in runs per game, as well as slugging percentage and OPS.

Adolis Garcia is the only positional player with a WAR above 1.1, while Nathaniel Lowe is the only regular batting north of .250. Entering play on Tuesday, Texas was averaging a measly 2.1 runs in their meetings with Houston so far this season.

Each of the first 10 meetings between these two teams have produced eight runs or less, and there’s not much that hints at this being a high scoring affair.

Both of these offenses have underwhelmed this season, and in Texas’s case, they present a favorable matchup for Garcia to rebound in.

As for Houston, even though we don’t know who’s getting the ball for the Rangers, it’s hard to have too much confidence in their lineup. They’ve scored four of fewer runs in six of their last seven.