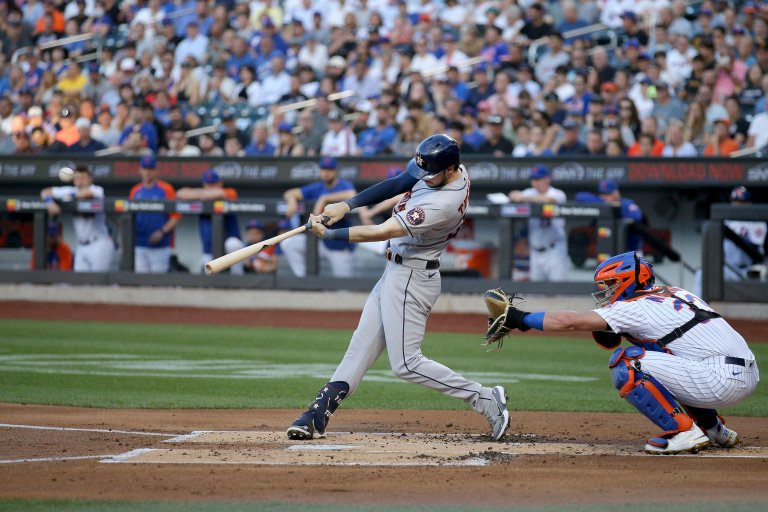 The Houston Astros are -125 road favorites over the New York Mets in an MLB inter-league game slated for Wednesday, June 29
Houston is 6-0 straight up in the last six games against New York
All of the Astros vs Mets odds, picks, predictions and best bets are assessed in the story below

The American League West-leading Astros are absolutely putting a beatdown on the National League-East frontrunners the Mets. Houston will be looking to sweep the brief two-game set with a victory on Wednesday. The Astros also took two games from New York’s NL club last week in Houston. In fact, the Astros have won six in a row from the Mets.

Oddsmakers are on board with a Houston whitewash. The Astros are set as -125 favorites. Houston is 20-11 straight up as an away favorite this season.

First pitch at Citi Field for this Wednesday, June 29 game is set to be thrown at 1:10 pm ET. Clear skies, 12 mph wind and a temperature of 81 degrees is in the forecast.

In MLB betting trends, both the moneyline and spread splits show public wagering is supporting the Mets at 60%. The public is also backing the over at 60%.

Back in the groove after missing last season due to Tommy John surgery, Astros righthander Justin Verlander is positioning himself to collect the third Cy Young Award of his career. He’s currently the +415 second betting option in the AL Cy Young Award odds.

Verlander rates among the top 9% in AL hurlers in both wOBA (.245) and bases on balls percentage (4.6). He’ll be making his second straight start in New York. Verlander got the decision in a 3-1 Astros victory on June 24 at Yankee Stadium.

Turns out the Houston Astros won the series in New York. Nobody saw the official tie breaker take place but here it was. @JustinVerlander for the win

The veteran righty is 3-1 with a 2.19 ERA in his past four starts. He’s 2-1 with a 4.80 ERA in three starts against the Mets. In his only career start at Citi Field, Verlander took the loss. He allowed five earned runs in two innings for a 22.50 ERA.

At 6-2, right-hander Taijuan Walker is one win away from equaling his season total with the Mets in 2021. He’s won his last three starts while posting a 2.41 ERA.

Taijuan Walker got the W today, but he also got the W prior to yesterday’s game, as he surprised fans at Citi Field and paid for their Pride gear. pic.twitter.com/x7s5GdYg6d

The righty is 5-5 with a 5.04 ERA in 15 career starts against Houston. The Astros are showing a .285 batting average against Walker.

Yes, it’s only one start, but Verlander’s lone trip to the bump at Citi Field was an unmitigated disaster. Two starts ago, he gave up seven runs – four earned – in a loss to the White Sox.

Walker has proven to be the picture of consistency this season. And it figures that the Mets are going to bounce back from an embarrassing 9-1 loss on Tuesday.