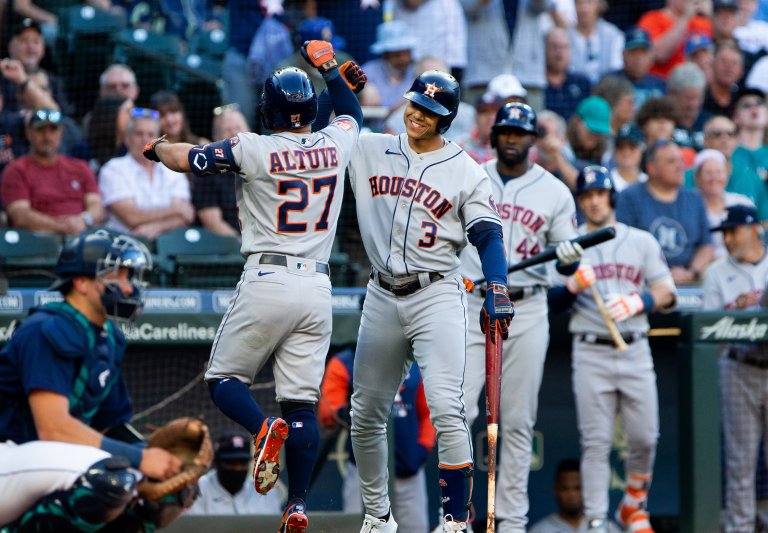 The Houston Astros and Seattle Mariners face off at T-Mobile Park on Saturday, July 23rd
Houston has a huge lead in the AL West, while Seattle just had its 14-game win streak snapped
Read below for the Astros vs Mariners odds and betting preview

The Houston Astros (62-32) face the Seattle Mariners (51-43) on Saturday at T-Mobile Park. The second game of a three-game series has a scheduled first pitch of 4:10pm ET. The Astros will send Justin Verlander to the mound, while the M’s counter with Logan Gilbert.

The road team is favored in this one and is heavy -10000 favorite to win the AL West. Meantime, the Mariners have +2000 odds to win the division.

Odds as of July 22nd at Caesars Sportsbook

After missing the better part of the last two seasons, the 37-year-old Verlander has picked up right where he left off in 2019 — when he won his second AL Cy Young Award. The Astros have gone 13-4 in the seemingly ageless right-hander’s starts in 2022, with 13 of those turns being quality ones. He’s won four straight decisions, sporting a ridiculous 0.67 ERA over 27 innings during the stretch.

Justin Verlander of the @astros is the first pitcher in MLB history to enter the All-Star break with:

He’s coming off a start last Saturday in which he went six scoreless innings, allowing six hits and no walks while striking out 10 in a 5-0 victory of the A’s.

Meantime, after entering the 2021 season as a rookie with lofty expectations, Gilbert is coming into his own this year. Seattle has gone 14-5 in the 25-year-old’s starts, eight of which have been of quality vintage. He’s been a little uneven in his last five outings after seven straight quality turns between mid-May and mid-June — but the M’s have gone 5-0 in that stretch. He’s been a workhorse to boot.

Gilbert went five innings in his last outing, allowing four hits, an earned run and no walks while striking out four in an eventual 3-2 win against the Rangers last Saturday.

After sweeping a doubleheader against the Yankees on Thursday, the Astros snapped the Mariners’ 14-game win streak on Friday. Clearly, things are going well for Houston to start the second half. Yordan Alvarez has blasted a pair of homers in the first three games since the break, while Jose Altuve was the player of the game in the opener of the series at T-Mobile — going 3-for-5 with a momentum-setting leadoff homer on Friday.

Houston’s lineup is chock full of professional hitters that can strike at any time and present a big challenge to Seattle’s pitching staff — which has been lights out since late June.

Fellow All-Star Ty France provided a solo shot for Seattle in the sixth inning on Friday, while Dylan Moore filled in well for Rodriguez — going 2-for-4. But Cal Raleigh struck out with the bases loaded in the eighth in a key moment that helped decide the game.

The Mariners currently have +4000 odds to win the Fall Classic, while the Astros are at +500 in the World Series odds.

Both starters come into this one especially hot. Verlander owns a 19-10 career mark against Seattle with a 3.20 ERA, but is a slightly more mortal 8-6 with a 3.70 ERA in the Emerald City. Gilbert is 2-1 in five career starts against Houston with a 4.67 ERA.

While the Mariners have been on baseball’s best teams over the last few weeks, it’s hard to pick up against the Astros right now — especially with the future Hall of Famer getting the start.