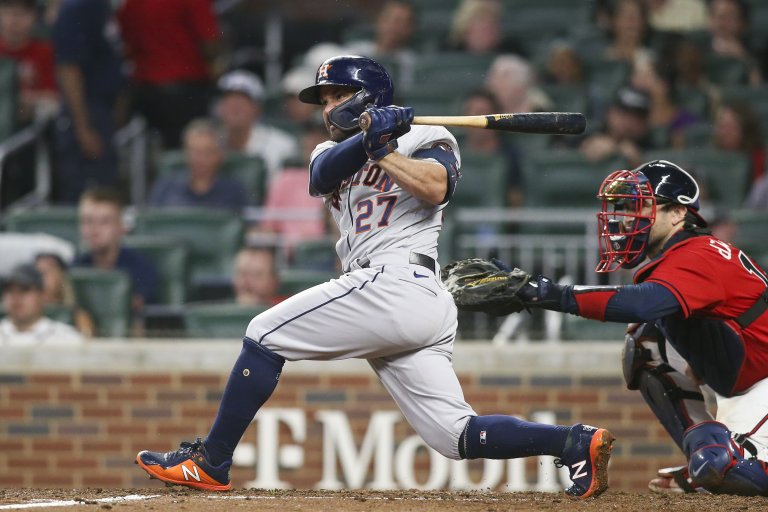 The Atlanta Braves are -155 home favorites over the Houston Astros in an MLB inter-league afternoon game slated for Sunday, August 21
Including last season’s World Series, Atlanta is 4-1 straight in the last five games against Houston
See the Astros vs Braves odds ahead of Sunday’s series finale

It’s the hometown Braves who are given the nod from oddsmakers as the -155 chalk in the conclusion of this three-game series. Atlanta is 39-18 straight up as a home favorite this season.

First pitch at Truist Park is set for 1:35pm ET on Sunday, August 21. Thundershowers with 7 mph wind and a temperature of 82 degrees are in the weather forecast.

In the MLB Division odds, the betting line is displaying the Astros as the -350 chalk to win the AL West. Atlanta is the second betting choice at +310 in the NL East. The MLB pennant odds show Houston at +180  favorite to win the AL pennant and the Braves as the +425 third choice to cop the NL flag. In the World Series odds, the Astros are +450 third betting choice and the Braves are +900 fifth choice.

Astros right-hander Jose Urquidy is proving to be one of the most consistent pitchers in baseball. He’s showing a .710 winning percentage (22-9) for his career and is 19-7 over the past two seasons.

The Astros are 15-7 in games he’s started this season. Urquidy has won six of his last seven decisions, counting just one loss over his past 11 starts. He’s allowed more than two earned runs only once through his past five trips to the hill.

Jose Urquidy since 6/21, which includes 9 starts:

Urquidy has posted 18 strikeouts against two walks over his last three starts. He rates among the top nine-percent of MLB hurlers in bases on balls percentage (5.0). But he’s in the bottom one-percent of Max EV (119.1), perhaps explaining the 20 home runs Urquidy has surrendered.

Veteran Braves right-hander Charlie Morton is 2-2 with a 2.92 ERA in eight starts since July 1. He’s worked at least five innings in 14-straight starts. In five of his last 11 starts, Morton hasn’t allowed an earned run.  However, he’s also surrendered four or more earned runs in 7 of his past 15 trips to the mound.

Morton leads the NL in hit batters with 14. He’s led the league in that category four times previously during his MLB career. Morton is also among the bottom five-percent among MLB pitchers in Max EV (115.8). He’s coughed up 18 homers.

Charlie Morton strikes out the side looking. pic.twitter.com/NC78w5ZqOU

Over his last three starts, Morton has struck out 27 batters while walking three. He’s 4-1 with a 3.07 ERA in 12 home starts this season.

Robbie Grossman (1-for-6) and Matt Olson (2-for-12) are the only Braves who’ve previously faced Urquidy. Both are batting .167 against him.

When Martin Maldonado hits it, he hits it hard.pic.twitter.com/kw0WueTXIf

Urquidy is both a starter and a stopper for Houston. He’s 3-1 this season when recording a decision immediately following an Astros loss. Off a Houston win he’s 7-3.

Over his last six starts, Morton was very good in three of them and very bad in the other three. It’s very bad’s turn in the rotation.