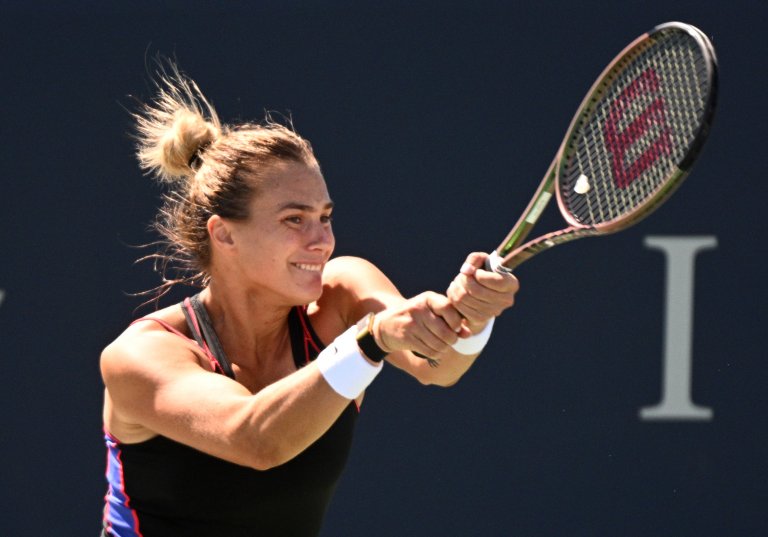 Even with her serve struggles, Aryna Sabalenka is into the Western & Southern Open quarterfinals
She faces unseeded Zhang Shuai, who ousted Naomi Osaka in the first round
Sabalenka is a surprisingly strong favorite. We break down her chances of making the semifinals

A match of sharp contrasts is in store Friday afternoon in Cincinnati (not before 3:30 pm ET) when the mercurial Aryna Sabalenka faces the calm and steady Zhang Shuai for a spot in the semifinals.

Sabalenka’s serve made her life complicated once again Thursday, in a late-night odyssey against Shelby Rogers.

And yet somehow, she made it through.

Sabalenka’s 21-16 won-loss record this season, coming into Cincinnati, makes her year sound a lot better than it actually has been.

She has been plagued with the yips on her serve, trying to battle through them. And she has a great serve, in normal times. So it’s a big weapon missing from her arsenal.

After making the semifinals at both Wimbledon and the US Open in 2021, she was out in the fourth round at the Australian Open, and the third round in Paris. She missed Wimbledon because of the ban on Russian and Belarussian players.

Perhaps that enforced break ended up being helpful, on some level.

Coming into the week, she led the WTA Tour with 310 double faults. The next player on the list, Coco Gauff, had fewer than 200.

It was nearly 12:30 am Friday morning by the time Sabalenka finally saw off Rogers.

So she doesn’t have much turnaround time.

Zhang had the “not before 3:30 pm” slot Thursday. Which is the time slot in which the two will play Friday.

By the time Sabalenka got treatment and got the adrenaline to stop pumping early Friday morning, it likely would be less than 12 hours before she has to play again. Which is not easy.

It will also be hot and humid.

Late night special [email protected] outlasts Rogers in a tight contest and is into her seventh WTA 1000 quarterfinal!#CincyTennis pic.twitter.com/SRNlK7WQ8o

But for Sabalenka, who has wasted so many opportunities this season because of a serve that she just can’t settle down, the victory is getting there.

She had six double-faults against Rogers, some of them at just the wrong time. But she also saved 7-of-10 break points, some of them with timely serves.

A Wondrous Week for Zhang

At 33, Zhang is known more for her doubles prowess than her singles; her career high in singles was six years ago.

But she’s had an impressive week in dispatching an out-of-sorts Osaka, then a dangerous Ekaterina Alexandrova in straight sets.

Against No. 2 seed Anett Kontaveit in the round of 16, she dropped the first set before handing Kontaveit yet another tough loss in a tough season.

She has been super solid, and she’s experienced enough to stay in there through Sabalenka’s peaks and valleys.

The two have met four times. And if there’s a conclusion to be drawn, it’s that Sabalenka really has the upper hand on the red clay.

Their two earlier meetings, on outdoor hard courts, were much closer, with Zhang winning the first one back in 2016.

Then again, she’s not quite herself right now.

What’s your favourite tennis quote of the year?

I’ll start with “I’m happy that I made only 10 double faults!” (Sabalenka at the AO)

But she won’t cringe at seeing who is standing in the way of her getting to a WTA 1000 semifinal.

As the draw came out, Sabalenka had No. 2 seed Kontaveit, Leylah Fernandez and Osaka in her quarter. While none are in great form, her head-to-head against Zhang should help her approach the opportunity with calm.

Wait … who are we kidding? This is a Sabalenka 2022 match. There will be drama. And double faults.