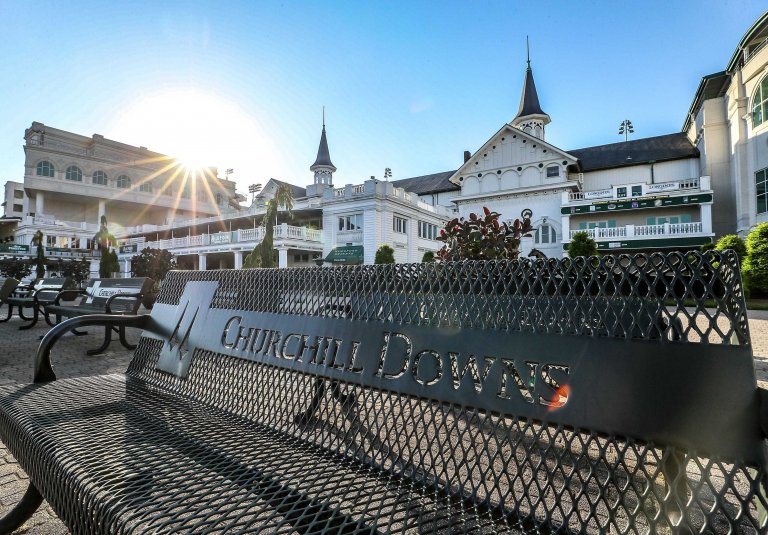 For the first time in two months there is racing on the new Churchill Downs turf course Saturday
The Grade 1 Beverly D Stakes and Grade 1 Arlington Million used to be run in Chicago
Where can we find betting value this weekend in Louisville?

Prior to this year’s Kentucky Derby a new turf course was installed at Churchill Downs. Many thought it was too loose, and the divots were unusually long. It was shut down on June 10. Repairs have been made, and Saturday it will be re-opened.

Let’s look at the fields and consider where we can find betting value on Arlington Day in the Bluegrass State.

Odds as of August 10

The half million dollar Beverly D goes at 3:01 pm EST Saturday with the Arlington Million scheduled for a 6:25 pm start. Temperatures are expected to be in the low 80’s with very little chance of rain. Fox Sports 2 will televise the races.

Two pretty different fields may call for varying handicapping and wagering strategies. Betting on different types of horse races requires a good idea of all your options.

The Beverly D is a Breeders Cup Win & You’re In Event. The victory gets a berth in the Filly & Mare Turf. Breeders Cup Classic odds are out. It is never too early to think about futures plays, and the past is worth considering too.

Roughir made her US debut in November’s Breeders Cup after a series of very quick races in France. She finished seventh in the Filly and Mare Turf, and this year has one win in three tries.

Though Roughir has faced strong competition in a pair of grade one races in New York this summer, she has not hit the board, and her form is not what we thought when she first came across the pond. That said, she is more than capable.

Lily Pond has run just five times, all in Ireland. The races in her home country are not as impressive as what Rougir was doing in France.

O’Brien did not bring top jockey Ryan Moore over with him this time, as he did with Santa Barbara last year. That said, Lilly Pond is in terrific form, and generally turf racing in Ireland, England, and France is the best in the world.

Family Way has won just one of four races this year, but she has not been worse than the runner-up in any of them. After taking a Grade 3 event in Florida, she has been very close to two top horses in Grade 1 events.

Losing by less than two lengths to War Like Goddess, and half a length to Bleecker Street is pretty high praise. She won on the old Churchill Downs turf course last summer.

Princess Grace beat a lesser group of horses in a grade three race at PARX last time out. She was in terrific form last year around this time of year. With seven wins in 11 starts and over $1 million in earnings, she’ll need her best but is in the mix.

Four of the five horses are on pretty similar footing here. Rougir may be the most talented and accomplished, but just hasn’t run great recently. Lily Pond was beating second or third tier European horses, and we need to see where she fits in America. Princess Grace has only beaten this caliber of filly occasionally. Family Way is in terrific form, been facing top notch competition, and may get a little overshadowed by other horses. It is unclear whether the distance is a little shorter than she’d prefer.

For years, because of the purse, top grass horses circled the Arlington Million on the calendar. In recent years, the prize went down and some prestige with it. It is nice to see the purse money back, and a top field with it, though it will look strange being run 350 miles south of Chicago.

Smooth Like Strait is ultra consistent. A winner of nearly $1.6 million, he has seven wins in 21 starts, and eight times has been the runner up. It has been over a year since he scored, but he always is right there.

In two races this year against Grade 1 competition, Smooth Like Strait has finished second and third. He should be near the lead, but is the distance a little further than he likes? His last five tries have all been at a mile.

Santin was phenomenal on Kentucky Derby Day at Churchill Downs.

That was at the same distance and track as this weekend. However, he did not run well June 11 at Belmont Park. Did he have an excuse? Maybe. He had to have a shoe repaired in the paddock before the race, it was at a-mile-and-a-quarter, and he had never raced in New York before.

Sacred Life is coming off a victory.

That was his first win in four tries this year. If the pace is hot, and it may be, he should be rolling late. That said, this is a tougher level of competition than his recent victory.

Set Piece is coming off a forgettable effort as the favorite at Saratoga last month. His previous race on the Preakness Stakes undercard was strong.

Set Piece has consistently run good enough to compete with this group, and loved Churchill’s old turf course. It is unclear what that means for the new one. He will be far back early on, so needs tempo to mount a late charge.

Admission Office won the Arlington Stakes, moved from Chicago to Louisville, on this very turf course in June. That was his first race in over a year. He returned to run last of five, only beaten by just over two lengths in a marathon race at Belmont Park last month. A win over this grass, and some back class makes for an interesting longshot.

This is a good field and you can go in a lot of different ways. At the age of four, Santin should just be starting to run his best. His rivals today are older, and we probably have seen their top efforts. Because Santin didn’t run well for whatever reason last time out, there is some value present.