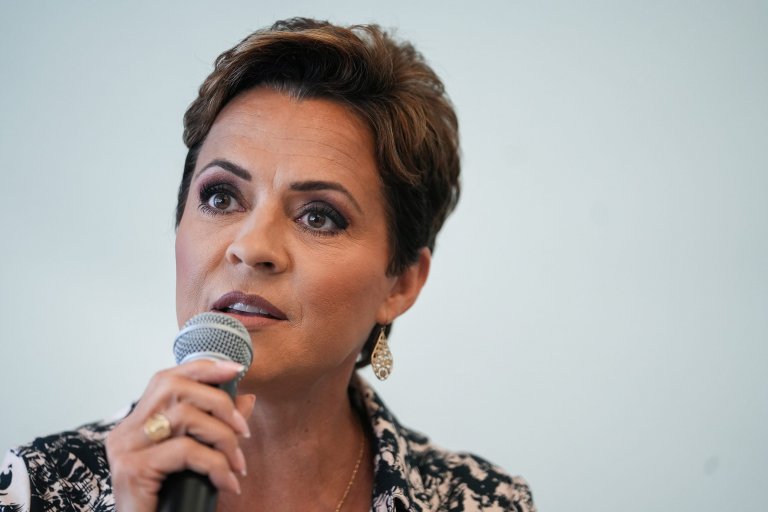 Kari Lake speaks about Arizona’s economy during a forum with candidates for the governor of Arizona hosted by National Association of Women Business Owners at the Esplanade on Wednesday, June 15, 2022, in Phoenix.

Republicans have made the Arizona Governor’s chair their personal property. It’s been that way for over 15 years. There hasn’t been a Democrat sitting as governor of the Sun Devil State since 2006.

Oddsmakers don’t foresee that fact of life changing. It’s the Republican party that is already established as the -255 odds-on favorite to produce the winner of the 2022 gubernatorial election. This even though neither party has yet to put forth their candidate for the 2022 Arizona gubernatorial race.

Note that the odds quoted above are from Bet365, a UK and European sportsbook which is permitted to offer political futures. This market is not open to US bettors.

At a betting line of -255, the Republicans are being given an implied probability of victory that works out to 71.83%. A $10 wager on him would return a payout of just $13.90 should they be the party that wins the 2022 Arizona Gubernatorial election.

Current Republican Arizona Governor Doug Ducey has served in the position since 2014. His term limits are up, so he is legally unable to seek another term on the job.

Ducey vs Trump in a Republican Sequel

Ducey and then US President Donald Trump went toe to toe following the 2020 US Presidential election. Trump was claiming the Arizona results were erroneous after Democrat Joe Biden carried the state. As a result, he was demanding that Ducey refuse to certify the results. However, Ducey did indeed certify Biden as the winner in Arizona.

Ever the bitter, vindictive man, Trump is endorsing Cari Lake to be the Republican candidate for Arizona Governor. The former TV news anchor is parroting Trump’s talking points. She insists that the election was stolen from him. Certainly were she to win the Republican primary and then the Arizona Governor’s chair, Lake would prove handy to Trump in the 2024 US Presidential election.

I am honored to announce the endorsement of former Vice President @Mike_Pence.

He has been a warrior for the sanctity of Life; limited government; law & order; opportunity for all; & the knowledge that our freedoms are granted by God.

I’m proud to have him on my team. #AZgov pic.twitter.com/7u680Z7CDU

Lake’s opponents and detractors have taken to referring to her as “Fake” Lake. Ducey is backing her opponent, Karrin Taylor Robson. She’s a former member of the Arizona Board of Regents. Robson is also a wealthy GOP donor. She’s refusing to peddle Trump’s lie that the election was stolen from him.

Robson does fall in line with traditional Republican viewpoints on gun control, abortion and immigration. She also has the backing of former US Vice-President Mike Pence.

Current Arizona Secretary of State Katie Hobbs is the clear frontrunner to win the nomination as Democrat candidate for Governor. She previously served as a State Senator.

Proud to be endorsed by former Rep. Ron Barber, who knows firsthand how important it is to have a proven leader in office. As my opponents engage in their chaotic primary battle, I’m working hard to bring bipartisan solutions to move our state forward. pic.twitter.com/Xq4MYwdAXV

Her only opponent is Marco Lopez. He’s a small business owner in the state and a 1999 graduate of Arizona University. Lopez is running for office for the first time.

Any Chance for Democrats in Arizona Governor’s Race?

Both parties will be holding primaries on Aug. 2.

Janet Napolitano, in 2006, was the last Democrat to rule as Governor of Arizona. It’s interesting that it figures to be two women running for Governor. Four of the past six Governors of the state were women.

If you’re trying to fill the void left behind by @SNL’s season ending, luckily, you don’t have to wait until the fall to get your fix. The Republicans running for Arizona governor got it covered! pic.twitter.com/mZRMaW8RzM

As well, four of the past six Governors of Arizona were also Republicans. However, of all the candidates in this election, Hobbs is the one with the best resume in terms of serving the state. There’s upset potential here that’s worth taking under consideration.