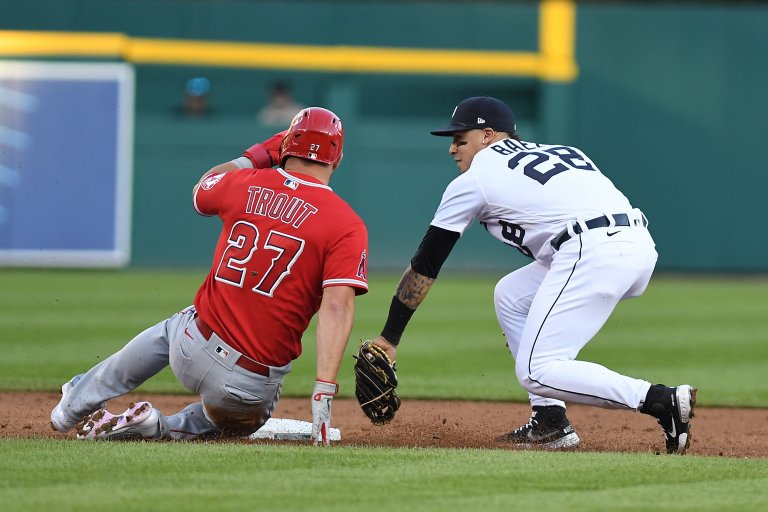 The LA Angels and Detroit Tigers face off at Comerica Park on Saturday, August 20th
The Halos are headed for an eighth straight season outside the playoffs, while the Tigers let go of longtime general manager Al Avila last week
Read below for the Angels vs Tigers odds and betting preview

The LA Angels (52-67) face the Detroit Tigers (45-76) on Saturday at Comerica Park in the second of a three-game series that has a scheduled first pitch of 1:10 pm ET.

Since being rejoining the Halos following a two-week-plus stint in the minors to figure things out, Detmers has done just that for the most part. Over six starts since July 8th, the 24-year-old rookie has gone 2-0 with a 1.50 ERA over 36 innings. LA has only managed a 3-3 record in that timeframe, but the guy who spun a no-hitter earlier this season also completed an immaculate inning against Texas on July 31st.

Reid Detmers continues to pitch exceptionally well after being sent down for a short stint.

The lefty went five innings in his most recent turn last Saturday against the Twins, allowing five hits, two earned runs and three walks while striking out nine in an eventual 5-3 Angels win.

Meantime, fellow southpaw Alexander has failed to have similar success in 2022. Detroit is 0-8 in the 28-year-old’s turns this season and just 3-15 in his overall appearances. On the bright side, the former second-round pick has pitched well lately. Over his last three outings, he’s gone 17 innings with a 3.71 ERA.

Alexander went five innings in his last start on Sunday against the White Sox, allowing six hits, three earned runs and three walks while striking out two in a 5-3 defeat.

Patrick Sandoval set the table quite nicely for Detmers in the series opener, tossing a complete game shutout in a 1-0 victory over the Motor City Kitties. It’s the first time the franchise has had at least two complete games in the same season (with Detmers’ no-hitter on May 10th being the other) since 2016. Jared Walsh provided the only offense LA needed in the second inning.

Perhaps the biggest takeaway though? Mike Trout was back in the lineup for the Angels on Friday for the first time since July 12th. The three-time AL MVP went 1-for-4 with a pair of strikeouts. Having Shohei Ohtani and Trout hitting 1-2 in the lineup certainly gives LA an advantage.

Meantime, Detroit’s disastrous season continued on Friday. After being shut out, the Tigers are now 8-21 since the break and a paltry 4-14 in the month of August. Things have gotten so bad in Motown, the franchise parted ways with Avila — who had been with the organization since 2002. Highly-touted rookie Spencer Torkelson was sent down to the minors last month, fellow top prospect Riley Greene is hitting only .224 and free agent acquisition Javier Baez is slashing a paltry .225/.267/.375. Good thing this team still has Miguel Cabrera.

The Tigers currently have +900000 odds to win the Fall Classic, while the Angels have nearly as long +500000 odds in the World Series odds.

Detmers’ slider has become one of the more devastating pitches in all of baseball since his return from the minors. With the Tigers sporting the worst record in the bigs since the break, there’s no reason to think they can solve Angel pitching after being whitewashed on Friday.

Plus with Trout back, LA is the clear favorite in this spot.