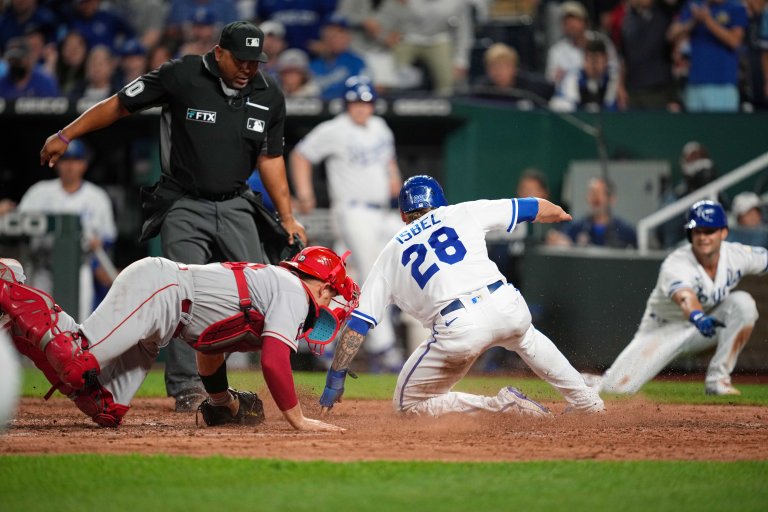 It’s hard to fathom but at one point this season the Los Angeles Angels were 11 games over .500. Fast forward to present day and LA has dropped 43 of its past 59 contests and sits 23.5 games back of the AL West lead.

The struggling Angels will close out their three-game set with the Kansas City Royals on Wednesday afternoon, and oddsmakers are siding against LA.

Odds as of July 26th at Barstool Sportsbook

Kansas City is currently a -120 moneyline favorite, in a game with a total of 9. First pitch is scheduled for 2:10pm ET at Kauffman Stadium in Kansas City, Missouri, with clouds and 84-degree game-time temperatures in the forecast.

The Angels, who’ve been an afterthought in the World Series odds for the past two months, will give the ball to Janson Junk. The 26-year-old will make just his second appearance of the season and the fifth start of his big league career.

Junk has spent the majority of the season in Triple-A Salt Lake, where he compiled a 1-3 record and a 3.88 ERA in 10 starts. He’s pitched just one inning at the Major League level in 2022, and was winless in four starts with the Angels last year.

The Royals will counter with Brad Keller. The 26-year-old has been inconsistent to say the least in 2022, trading excellent outings with awful ones over the past month and a half.

Brad Keller gave up four earned runs and walked five in 4 IP. The lineup did have 12 hits (MJ had 2, Benintendi had 2, Pratto had 2).

Last time out, he coughed up five runs to Tampa Bay walking five batters while striking out just one. The start prior he yielded only one run to the Tigers over 7 innings, scattering three hits and striking out eight.

Over his past seven starts he’s allowed four or more runs four times, while yielding one run or less in each of the other three outings. He has pitched better at home than as a visitor this season, posting an era that is .62 points lower, and an opponent batting average that is .17 points better.

Wednesday certainly profiles as a start Keller should succeed in. The Angels enter play as a bottom-five scoring lineup, ranking 24th or worse in both slugging and OPS.

Over the past month they have an atrocious slash line of .196/.265/.303, despite featuring two of the top-five contenders in the AL MVP odds for most of their contests.

Mike Trout, one of those talents, will be absent on Wednesday due to rib inflammation. That leaves Shohei Ohtani to shoulder the offensive load and, if you’ve wondered how valuable he, is consider the following. Entering Tuesday LA had won just three of its past 18 contests, and only one of those wins came in a game that Ohtani didn’t start on the mound.

KC meanwhile, will also be missing some firepower. Their top-two sluggers Salvador Perez and Bobby Witt Jr. are expected to sit out once again, which doesn’t leave much for Junk to fear on paper. The Royals lineup ranks 25th in runs per game this season, but lately they’ve been heating up.

The Royals had won three straight games entering Tuesday, hitting .292 with a .759 OPS over the past 14 days. They’ve averaged five runs per outing in their last nine home games, and have crossed the plate at least six times in three of four meetings versus LA this season.

[email protected] goes oppo for his 10th of the season!#TogetherRoyal pic.twitter.com/u1IMeEPbXQ

It’s hard to project how effective Junk will be, but the fact that he was far from dominant in Triple-A should give KC backers confidence. Once Junk exits the game the Royals should feast on a lousy Angels bullpen. LA relievers rank 27th in WAR this season, and bottom-10 in ERA, strand rate and HR/9.