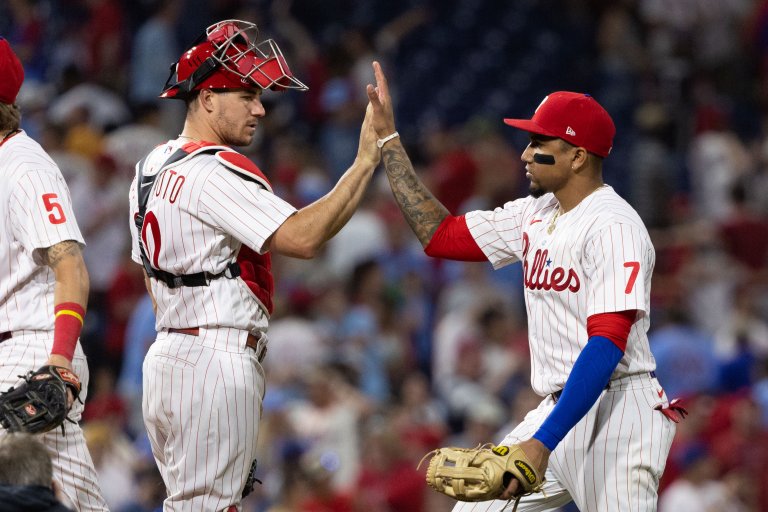 The Phillies are -115 home favorites over the Angels on Sunday
Lefty Patrick Sandoval (3-1, 2.70) will start for Los Angeles against Kyle Gibson (3-2, 3.83)
A look at the matchup and odds can be found below with a pick

The Phillies (24-29, 14-15) have won three straight games, including two in a row over the Angels since firing manager Joe Girardi on Friday and replacing him with bench coach Rob Thomson on an interim basis.

The win streak comes after the Phillies lost five in a row and seven of eight.

Odds as of June 4th at BetMGM

The Phillies are -115 favorites in a game that will be televised by MLB Network, giving them a 53.49% win probability. The Angels have World Series odds of +2500 and Philadelphia is listed at +4000.

The weather forecast calls for sunny, a high temperature of 80 degrees and wind from the southeast at 5 mph.

Left-hander Patrick Sandoval is scheduled to pitch for the Angels against Kyle Gibson (3-2, 3.83). Sandoval will be working on six days of rest and Gibson on five.

Sandoval is 2-0 with a 4.03 ERA in his last four starts but was hit hard by the Toronto Blue Jays in his most recent outing Sunday in Anaheim. Though he did not factor in the decision, Sandoval was rocked for six runs (five earned) on five hits and three walks in three innings while striking out four.

Patrick Sandoval walked three in a row, pushing home a run, and then this happened.

The #Angels are down 6-2 in the 3rd. pic.twitter.com/zwfHSijL2d

Sandoval, who has +5000 AL Cy Young odds, will be making his first career appearance against the Phillies.

Gibson is 0-1 with a 5.31 ERA in his last four starts. However, Gibson pitched well in a no-decision against the visiting San Francisco Giants on Monday, allowing two runs on three hits in six innings with four strikeouts and one walk.

Strikeout #1 of the day for Kyle Gibson! pic.twitter.com/CjO8AxSBfB

Sunday’s game would appear to be a good situation for Gibson. He is 3-1 with a 2.37 ERA in five starts at Citizens Bank Park this season and 2-1 with a 2.19 ERA in four starts in the daytime.

Johan Camargo drove in four runs to lead the Phillies to victory on Saturday night and Zack Wheeler struck out nine in six innings for the win.

A two-run double by JT Realmuto and Camargo’s two-run single helped the Phillies take a 5-0 lead in the first inning. Camargo hit another two-run single in the eighth and Realmuto finished with three doubles.

Just having some first-inning fun ? pic.twitter.com/GndCfCOOEs

Trout went 0-for-4 with three strikeouts. He is hitless in his last 23 at-bats, the worst slide of the three-time American League MVP’s career.

Angels right fielder Taylor Ward is expected to be in the lineup Sunday. He left Friday’s game with right hamstring tightness and did not start Saturday.

The Angels had won 12 straight games against the Phillies prior to Friday.

The Phillies have got at least a short-term boost by switching managers. Look for them to make it a sweep of the freefalling Angels.