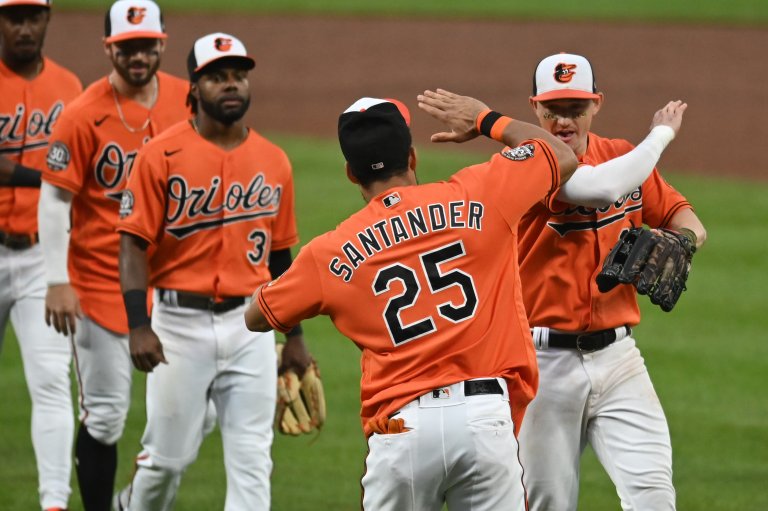 The Angels and Orioles sport identical -110 moneyline odds for Sunday’s matinee (July 10, 12:05pm ET)
Los Angeles will send Jose Suarez (1-2, 4.30 ERA) to the mound, while Baltimore will counter with Austin Voth (0-1, 7.20 ERA)
Read below for the Angeles vs Orioles odds, analysis and betting prediction

Don’t look now, but the Baltimore Orioles have won seven straight. No, that is not a typo. The perennial AL East cellar dwellers are on fire this week, and are one win away from a four-game sweep of the Los Angeles Angels.

LA on the other hand, has been dreadful during its nine-game road trip — more on that later — but despite their struggles and the O’s recent success, a close game is projected for Sunday’s series finale.

That’s because the Angels and Orioles sport identical -110 moneyline odds, in a game with a total of 9. The first pitch is scheduled for 12:05pm ET at Camden Yards in Baltimore, with clear skies and 79-degree game-time temperatures in the forecast.

LA, an afterthought in the World Series odds, will give the ball to Jose Suarez. The 24-year-old has rebounded from an awful first two months of the season, allowing two runs or less in four straight outings.

He posted a 2.35 ERA in June and has recorded a 19-to-3 strikeout-to-walk rate over his past four starts. He doesn’t have a ton of history with Baltimore, but the Orioles hitters he has faced have not fared well against him. Current O’s batters are hitting just .208 with a .223 OBP in 26 career at-bats.

The Orioles, meanwhile, will counter with Austin Voth. The 30-year-old will make his fifth start since being acquired from Washington, and is in the midst of another disappointing season.

Voth has posted an ERA of at least 5.34 in three consecutive years, and has yet to make it out of the fifth inning in any of his Baltimore starts. He’s coughed up eight hits and six runs over his last two outings, pitching just 7.1 total innings.

I think it is safe to say that Austin Voth is not a 4 or more inning pitcher. That said, who gets the opportunity to move into the starting lineup?#Birdland

He’s never faced Mike Trout or Shohei Ohtani before but it looks like he’s catching them at the right time. It’s unclear how much that will matter though, as Voth has yielded a .333 average to opposing hitters this season.

The entire LA lineup has been a disappointment over the last two weeks, including Ohtani and Trout, the second and third leading contenders in the AL MVP odds. Ohtani is batting just .192 over his past eight games, while Trout is hitting .196 over his past 15.

shohei ohtani doing everything he can to try and help the angels win pic.twitter.com/cj7z5vAlJG

Baltimore has had no such problem producing offense lately. They’ve crossed the plate 32 times during their winning streak, while allowing just three runs per contest.

The hottest team in Baseball: Your Baltimore #Orioles, winners of 7 in a row. They are 3 1/2 games out of a wild-card spot despite playing in the toughest division in baseball, the AL East. Take a bow, Manager Brandon Hyde!

Cedric Mullins, Austin Hays and Trey Mancini have paced the team for most of the season, but it’s been an entire team effort during their scorching hot run.

The O’s are batting .261 over their past seven games with a .429 slugging percentage and .762 OPS, which is 80 points higher than their season mark.

They’re just 3.5 games out of a Wild Card spot despite playing in baseball’s toughest division. They’ve already clinched a series victory this weekend, and own similar accomplishments over both the Red Sox and Yankees this season.

Baltimore is clearly a team on the rise, while LA can’t buy a victory despite featuring two of the AL’s three best players. Voth starting doesn’t provide a ton of confidence for O’s backers, but it’s worth noting how good their bullpen has been if he falters.

Orioles relievers held the Angels scoreless over four innings on Saturday, and have allowed only one run in 12 innings during this series.