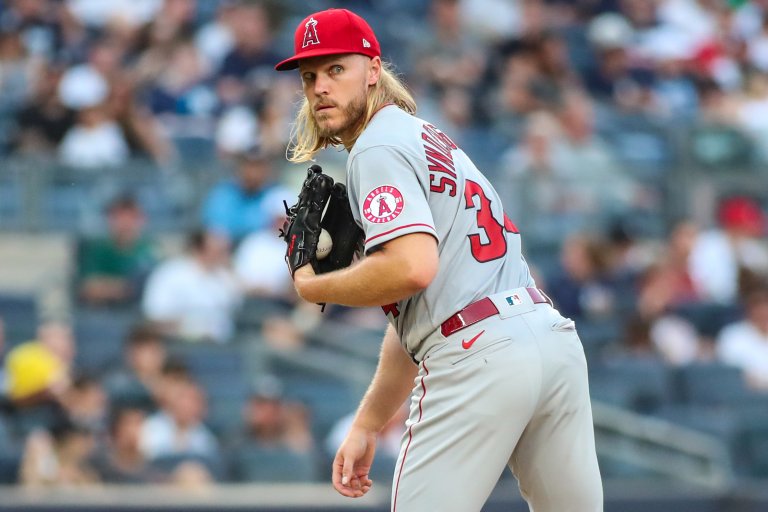 The Marlins are -125 favorites over the Angels on Tuesday night
Noah Syndergaard (5-6, 3.86) will start for Los Angeles against Sandy Alcantara (8-3, 1.95)
A look at the matchup and odds can be found below with a pick

The Marlins look to stay hot when they host the Los Angeles Angels at 6:40 p.m. ET Tuesday in the opener of a two-game series at loanDepot Park.

The Marlins (38-40, 19-16 home) are on a five-game winning streak, including sweeping a four-game series from the Nationals in Washington. Miami completed the sweep Monday with a 3-2 victory in 10 innings.

The Angels (37-44, 16-21) were swept in a three-game series by the Astros over the weekend in Houston, including losing 4-2 on Sunday. Los Angeles was off Monday.

Odds as of July 4th at DraftKings Sportsbook.

The loanDepot Park roof figures to be closed as the weather forecast calls for a 50% chance of thunderstorms and a gametime temperature of 94 degrees.

Noah Syndergaard (5-6, 3.86) is scheduled to start for the Angels against Sandy Alcantara (8-3, 1.95). Syndergaard will be pitching on seven days of rest and Alcantara on five.

Syndergaard ended a four-start losing streak his last time out when he beat the Chicago White Sox on June 27 at home. He worked seven innings and gave up three runs and seven hits to go with seven strikeouts and three walks.

Noah Syndergaard fixing his hair before jumping back in the brawl is hilarious 😂 pic.twitter.com/CyRRY7EKor

Alcantara continued his outstanding season last Wednesday by pitching a complete-game victory over the Cardinals in St. Louis. He allowed three runs (two earned) and seven hits while striking out three and walking one.

Alcantara has never faced the Angels.

Sandy got the DOG IN HIM pic.twitter.com/n4263LEVg0

Angels hitters have a combined 11 at-bats against Alcantara.

The Marlins’ Bryan De La Cruz hit a two-run home run off the left-field foul pole in the 10th inning to break a 1-1 tie Sunday in what proved to be the game-winning hit.

It marked the first time De La Cruz homered in the ninth inning or later in the major leagues.

Each of the top three hitters in the Marlins’ lineup had two hits – Miguel Rojas, Jesus Aguilar and Brian Anderson.

On Sunday, the Angels struck out 20 times in their loss to the Astros. Mike Trout went 0 for 11 in the series and punched out nine times.

Second baseman Michael Stefanic was called up from Triple-A Salt Lake and struck out in all three plate appearances in his major league debut. Utility player Tyler Wade was designated for assignment to open a roster spot.

Regardless, the Angels are high on Stefanic – in any language.

The Angels swept a two-game series from the Marlins at home in April as Brandon Marsh went 2 for 6 with a double and homer. The Angels lead the all-time series 11-6.

Considering Alcantara’s stellar record in Miami this season and Syndergaard’s problems on the road, the Marlins are the clear play in this game.