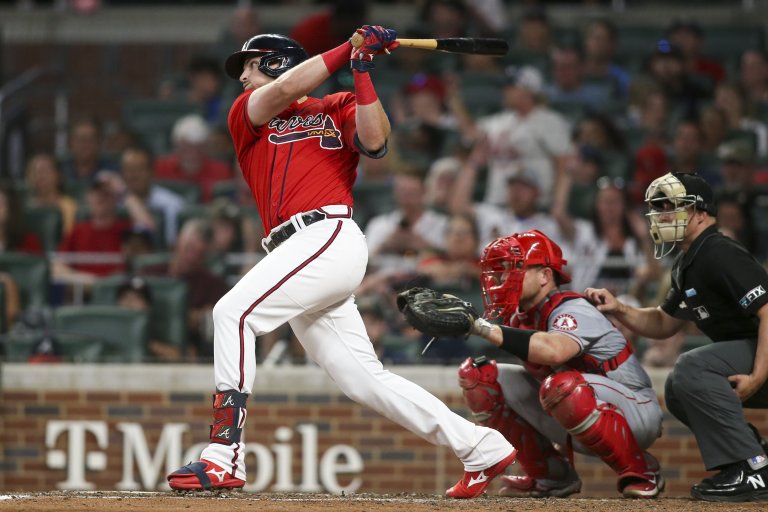 The Los Angeles Angels and Atlanta Braves face off at Truist Park on Sunday, July 24th
The Angels are in the middle of yet another disappointing campaign, while the Braves are nipping at the Mets’ heels in the NL East standings
Read below for the Angels vs Braves odds and betting preview

The Los Angeles Angels (39-55) face the Atlanta Braves (58-38) on Sunday at Truist Park. The final game of a three-game series has a scheduled first pitch of 1:35 pm ET. The Halos will send Reid Detmers to the mound, while the Braves counter with Ian Anderson.

Odds as of July 23rd at Caesars Sportsbook

The 23-year-old Detmers provided what has turned out to be one of only a handful of highlights for the Halos this season back on May 10th, when he tossed the 12th no-hitter in franchise history. But just six weeks after the 12-0 win over the Rays, the former first-round pick was sent to the minors. His 2022 season has been a microcosm of LA’s — some success, but more disappointment.

The last day that the Angels were all alone in first place was May 10th, 2022. The day of Reid Detmers’ no-hitter.

The Angels have gone only 4-10 in the rookie’s stars this season, with only three of those outings being quality ones. But on the bright side, his last two turns fall into that category, going 12 innings and sporting a 1.50 ERA. Alas, the Angels were on the wrong side of the ledger in both outings — a 5-4 loss to Baltimore and 3-2 defeat to Houston.

Meantime, Atlanta has enjoyed much more success when the 24-year-old Anderson has gotten the ball. The Braves are 12-6 in the lanky right-hander’s outings in 2022, but only four of his turns have been of a quality vintage. He’s undefeated in July, sporting a 2-0 record and 2.30 ERA over 15.2 innings.

Ian Anderson strikes out the side 3rd inning pic.twitter.com/xsXF631hdv

Anderson went 5.1 innings in his most recent star last Friday, allowing five hits, an earned run and three walks while striking out five in an eventual 8-4 win over the Nationals.

The Angels have been outscored 15-3 in the first two games in Atlanta and will be without Mike Trout for the foreseeable future. The three-time AL MVP had a cortisone shot in his back a few days ago and won’t even be ready when he’s eligible to return on Monday. Thank goodness for Shohei Ohtani.

The reigning AL MVP is neck-and-neck with Aaron Judge in the AL MVP odds, and has heard his named mentioned in trade rumors over the last couple days. Despite that, the organization is reportedly not considering moving him.

Meantime, the Braves continue to be one of the best, if not the best, teams in baseball since June 1st — sporting a 35-11 record since. A big part of the turnaround since a sluggish start has been the performance of Austin Riley. The All-Star third baseman has gone 5-for-8 against LA pitching in the series so far and hit a 2-run bomb in Saturday’s 7-2 victory.

AUSTIN RILEY IS COMING FOR THAT DAMN MVP pic.twitter.com/usWHgnAehk

His .577 slugging percentage is second-highest among NL qualifiers, behind Paul Goldschmiddt’s .596. Riley’s .926 OPS ranks third in the NL behind Goldschmidt (1.010) and Freddie Freeman (.938). Plus, there’s Matt Olson, Dansby Swanson and, oh yeah, Ronald Acuna Jr to contend with.

The Braves currently have +700 odds to win the Fall Classic, while the Angels are at +17500 in the World Series odds.

While Detmers seems to have gotten back on track of late and Anderson hasn’t been quite as dominant as Atlanta fans might like him to be, this one feels like a mismatch.

Ohtani can only do so much and Riley is stating quite a case to become the second Brave in the last three years to earn NL MVP honors. The Braves should earn the sweep.