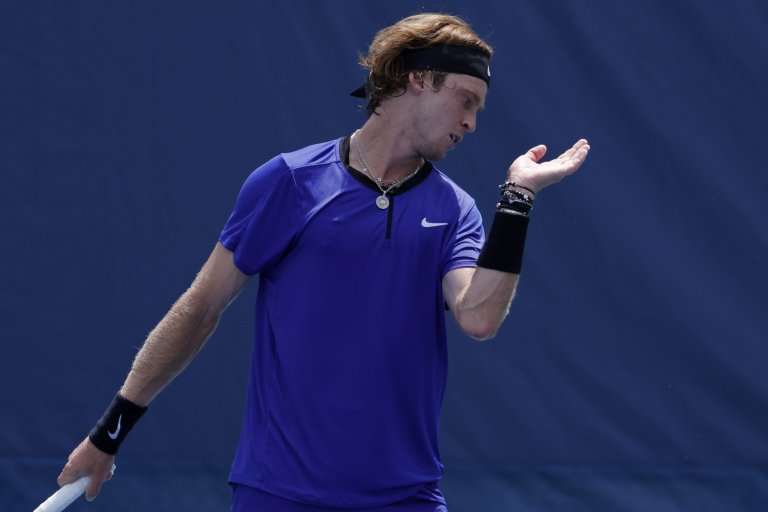 No. 1 seed Andrey Rublev faces Yoshihito Nishioka in the second Citi Open semifinal Saturday night.
Nishioka has beaten four top-40 players on his way to his clash with the Russian.
Rublev is a strong favorite; read on for analysis and predictions

Andrey Rublev, the No. 1 seed at the Citi Open, hasn’t lost a set in three matches on his way to the semifinals.

Odds as of Aug. 6 at Barstool Sportsbook

His opponent, Yoshihito Nishioka,  had to play an extra match without the first-round bye. And he has been on a giant-killing spree in the typically challenging summer weather conditions in Washington, D.C.

If you’re new to tennis betting, why not take a look at our Tips for Beginners page.

Nishioka, a diminutive lefty from Japan, has given fits to plenty of players in his career.

He defeated world No. 9 Félix Auger-Aliassime three consecutive times – including in the first round of the French Open in 2020 – before the Canadian finally broke the duck late in 2020.

Nishioka is lefthanded, which presents its own set of challenges. He’s quick. He serves hard. And he competes as though his life depended on it.

It took three hours and 35 minutes to get through that one.

And Evans, ranked No. 40, was the lowest-ranked player Nishioka, currently at No. 96, upset this week.

He opened his event by dismissing rising American Jenson Brooksby (No. 37) in straight sets.

After all that, and dealing with rain delays Friday, he got past Dan Evans.

Nishioka has spent nearly 10 hours on court through four matches this week, in extreme heat and humidity (nine hours, 50 minutes to be exact).

Rublev has played just three matches with the first-round bye. And his total match time is just four hours and 23 minutes.

On that alone, you would give him a huge edge in this one.

Rublev vs Nishioka Head-to-Head is 1-1

The two have met twice before. Both times, as it happens, in Australia.

The first encounter in Sydney three years ago was a beatdown by Nishioka (and a very bad day for Rublev).

Their most recent meeting, in Jan, 2021 in the ATP Cup, in Melbourne, was exactly the reverse for Rublev.

The Russian’s power, especially on the forehand side, can blow anyone off the court. Nishioka’s retrieval skills are supreme. But for that, he needs his legs.

And it’s likely he won’t have any legs left.

That’s why, as a solid although not impossible underdog at +420, it’s better to look for other options with better value.

The challenge these two will have is that they have to play the late-night match Saturday.

Nick Kyrgios and Mikael Ymer finished far, far later. But Kyrgios has a doubles match to catch up on. So the Aussie gets the 7 p.m. slot.

Right about that time, thunderstorms are expected to roll in.

So who knows when Rublev and Nishioka will get on court. As it is, they’re scheduled to play not before 9 p.m.

With years of practice, Citi Open knows how to weather the weather. A look at how the Washington tournament deals with D.C.’s late summer thunderstorms and lingering humidity. https://t.co/tKioM57oV8

On the plus side, the temperatures might be slightly cooler. On the negative side, the humidity is expected to be up around 80 per cent.

None of that is conducive to the game Nishioka’s ability to find energy where none remains.

So while it’s always a bit risky to go against a player who’s on such an incredible roll, it will be outside forces, more than Nishioka’s will, that will conspire against him.