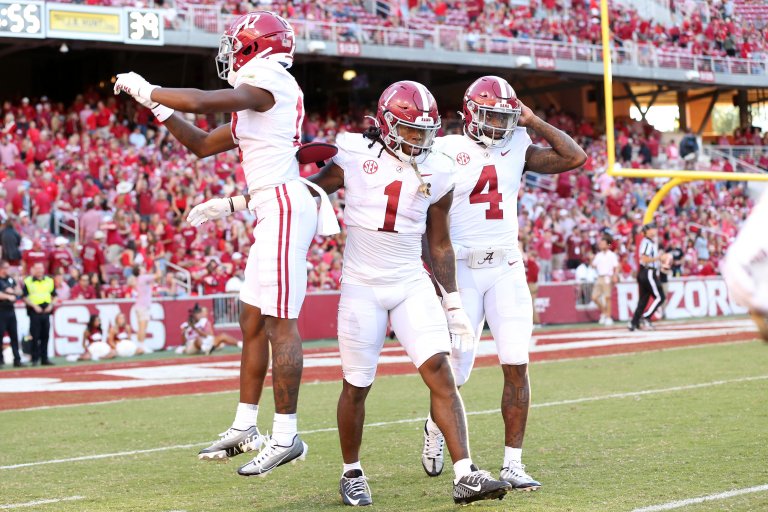 No. 1 Alabama is a 24-point favorite over Texas A&M on Saturday
Texas A&M upset the Crimson Tide in College Station last year
Read below for Alabama vs Texas A&M odds, lines and prediction

No. 1 Alabama (5-0, 2-0 SEC) is a 24-point home favorite over Texas A&M in an SEC game at 8 pm ET Saturday, October 8th on CBS. Crimson Tide quarterback Bryce Young suffered a shoulder injury in a 46-25 victory over No. 20 Arkansas last week, and his status is unknown.

Defending Heisman Trophy winner Bryce Young suffered a sprained AC joint in his right shoulder in the second quarter of the Tide’s 46-25 victory at Arkansas last week, and his status likely will remain uncertain until game day.

Young has suffered similar injuries and returned quickly from them, Alabama coach Nick Saban said. The loss of another game will have an adverse effect on Young’s Heisman Trophy odds.

The Crimson Tide squandered all but five points of a 28-0 lead against the Porker Pigs before scoring three fourth-quarter touchdowns behind backup quarterback Jalen Milroe and running back Jahmyr Gibbs to cover the 17-point number.

Gibbs had 206 yards rushing and long touchdown runs of 72 and 76 yards last week, and Milroe threw for one touchdown and rushed for another with 156 yards from scrimmage. Gibbs leads the team in rushing yards (378) and receptions (19).

Crimson Tide leap-frogged Georgia into the top spot of the AP Top 25 after a 46-25 victory over No. 20 Arkansas last week and remains an odds-on favorite in the college football playoff odds.

The Aggies have cycled through quarterbacks Haynes King and Johnson but nothing has helped. They are among the worst offensive teams in NCAA Division I, averaging 335 yards per game (105th in Division I) and 21.8 points (108th). Johnson lost a fumble last week and King threw two interceptions when forced into the game.

You want to know how messed up A&M’s offense is?

A&M RB Devon Achane is 3rd in the SEC in rushing, both overall and against FBS competition (only 4 ypg shy of 1st place in that one).

Yet somehow, as a team A&M is only 97th in the nation in rushing yards per game.

Halfback Devon Achane is averaging 93.2 yards rushing per game, the offense’s bright spot. The Aggies have become a long shot to reach their projected number in the CFB wins totals odds.

Young’s injury is the biggest deal, but this is not the only one. Defensive lineman Justin Ebiogbe (neck) is expected to miss his second straight game. Strong safety Brian Branch, who left the Arkansas game with an undisclosed injury in the second half, is expected to play. Branch has 22 tackles and a sack.

A&M quarterback Max Johnson, who completed 19 of 26 passes for 203 yards and a touchdown last week, suffered a hand injury late in the fourth quarter last week but is expected to play.

A&M is one of the early underachievers of the year. The Aggies are floundering at quarterback and have been bullied on the ground in losses to Appalachian State and Arkansas. A&M ranks 97th in Division I in rushing. Now enters Alabama, which averages 525 yards total offense and 251.4 yards on the ground.

Temper your play until Young’s status becomes clear, but if Young plays, the game will be a blowout. If he does not, Alabama still has enough to exact revenge for the loss in College Station a year ago.