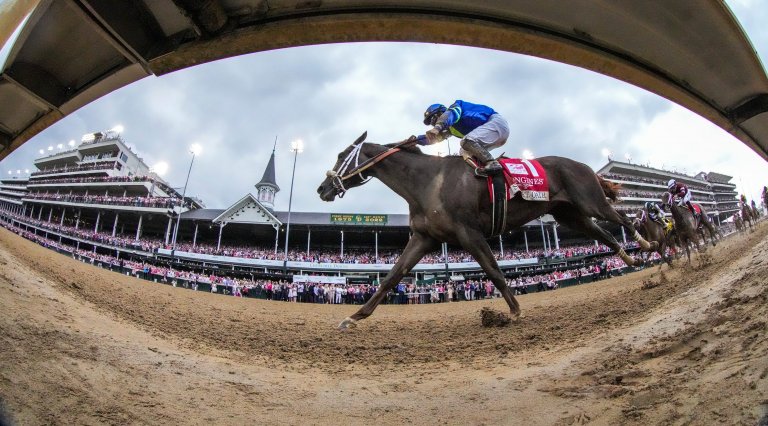 Secret Oath, with Luis Saez aboard, wins the Kentucky Oaks on Friday, May 6, 2022

The $600,000 Grade 1 Alabama Stakes at Saratoga will be run Saturday afternoon
Kentucky Oaks winner Secret Oath faces Coaching Club American Oaks champ Nest for the third time
Could Gerrymander or a longshot upset the two favorites in the Alabama Stakes?

On Kentucky Oaks Day at Churchill Downs, Nest was the +240 favorite. Secret Oath pulled a mild upset at +440, with Nest a couple of lengths behind in second. Then both top fillies tried racing against boys. Secret Oath didn’t get a perfect trip finishing fourth in the Preakness Stakes at +500.

Nest had a similar experience, getting out of the gate poorly, and finishing second at +530 in the Belmont Stakes. They faced each other last month at Saratoga, and Nest was an easy winner. Now they run against each other for the third time.

Nest is a heavy favorite in the Alabama Stakes, and the most likely winner, but is she the best horse to bet on? Is there value to be had trying to beat her? Let’s look at the odds and consider wagering options.

Odds as of August 18

The Alabama was first run in 1872. The mile-and-a-quarter test is slated to begin at 5:35 pm ET. Temperatures are expected to be in the high 80s with very little chance of precipitation. Fox Sports 2 has television coverage.

This is the type of event where understanding horse racing bet types is really important. You can love Nest, and still find a way to win more than pennies. If you think she may lose, the chance to score big is on the table.

The last two winners of the Alabama Stakes, Malathaat and Swiss Skydiver, won the Eclipse Award for American Champion Three-Year-Old Filly. Several top contenders for that award, including the two favorites, are in the field this year.

What Exactly are the Chances Nest Wins?

After a dazzling performance in the CCA Oaks, there is little doubt that Nest is the most likely winner of the Alabama. That, however, does not make her the correct bet.

The -165 odds (3/5) translate to a probability of 62.5%. A winner of five out of eight races, with earnings of $1.4 million, if you think Nest has a 65% shot of getting to the finish line first, she is a good value. On the flip side, if you believe she is the most likely winner, but it is below 60%, then there are likely better wagering options.

Trained by Todd Pletcher and ridden by Irad Ortiz, Nest has won at a mile, mile-and-a-sixteenth, and mile-and-an-eighth. She was second in the Belmont Stakes going a-mile-and-a-half. She has not run a mile-and-a-quarter race before.

It is pretty hard to fault Secret Oath. Since late December she has four wins and three losses. The L’s came last time out when Nest was simply remarkable, and twice against top-notch boys. She won the premier race for three-year-old fillies.

Secret Oath is trained by 86-year-old Hall of Famer Wayne Lucas. After some struggles, he is having a resurgence of success. Secret Oath’s best races have come when she mounts a strong late kick. She tried to contain Nest in the CCA Oaks. This time that would best be left to others, and not going wide would help too.

Gerrymander had a good two-year-old season, winning twice and finishing as the runner-up on a pair of occasions in four tries. While her debut this year wasn’t great on the Kentucky Oaks undercard, she responded big time on June 25 at Belmont Park.

Gerrymander beat a good field in the Mother Goose, and trainer Chad Brown skipped the CCA Oaks so that she would be fresh for the Alabama Stakes. That said, she has never raced around two turns and will need to repeat or better her last effort to be in the mix here.

The other four horses would need to dramatically improve to win the Alabama. That said, if Secret Oath can be forgiven for getting run over by Nest last time out, should we give the same consideration to Goddess of Fire or Nostalgic?

Goddess of Fire was 11th in the Kentucky Oaks but returned to run pretty well on opening day at Saratoga.

This will be the first time Goddess of Fire runs with blinkers, she is second off a layoff and trained by Pletcher.

Nostalgic was 10th in the Kentucky Oaks and returned to finish third, three lengths behind Secret Oath at The Spa on July 23. Veteran conditioner Bill Mott has won this race three times is always dangerous.

This is a numbers game. Do you think Nest beats this field seven times if they run against each other on 10 occasions? Secret Oath’s odds give her just over a 22% shot of winning, while Gerrymander is projected to win at a 20% clip.

Those numbers all feel fair. Though there won’t be huge cash to be won, an exacta key with Nest makes some sense, since the other horses seem dramatically slower than the top three contenders.

Gerrymander beat Nest in November, and Secret Oath did so in May. The odds are juicy enough to take a shot.