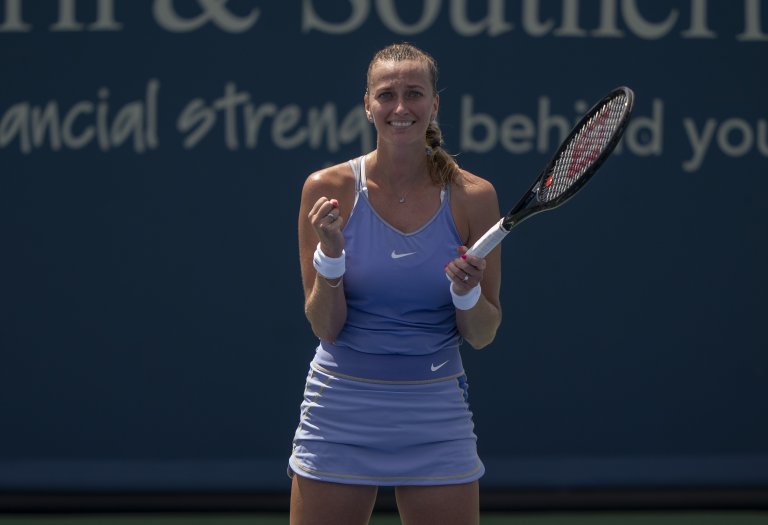 Unseeded Petra Kvitova and qualifier Ajla Tomljanovic meet Friday in the Western & Southern quarterfinals
It’s their first career meeting, despite nearly 1,500 pro matches between them.
Kvitova has impressed this week. Can she go further? We break down this Tomljanovic vs Kvitova match below

It’s been a quiet season for Petra Kvitova, one that made you wonder if she’s starting to wind it down.

But the 32-year-old Czech is looking vintage this week.

Kvitova barely got past fellow lefty Jil Teichmann in the first round, a matchup that didn’t appear to favor her – especially on current form. But after that, she rolled through Sorana Cirstea in straight sets.

And then, even if the world No. 5 came back to take the second set, she kicked off her round-of-16 match against world No. 5 Ons Jabeur with a breadstick, and wrapped it up with a bagel.

Tomljanovic is a different matchup – a lot more like the one vs Cirstea.

As the heavy wraps on both upper legs will attest, it’s been a long week for 29-year-old Tomljanovic, through the qualifying and all the way to the quarterfinals.

Qualifying at a WTA 1000, for the most part, is very high level. And the Aussie drew No. 5 seed Clara Tauson (ranked No. 47) and No. 9 Nuria Parrizas Diaz (No. 62), needing three sets to defeat Parrizas Diaz and make the main draw.

Ajla Tomljanovic defeats no. 3 seed Paula Badosa 6-7(3), 6-0, 6-2. Ajla won 9 consecutive games after bageling Badosa in the first set and going up 3-0 in the second set. Badosa looks fatigued and mentally dejected. She needs some time off before the US Open. Ajla is on 🔥 pic.twitter.com/JSZyx7bij5

Another qualifier in the final [email protected] outlasts Kudermetova in a nearly three hour affair to set a date with Kvitova#CincyTennis pic.twitter.com/ZADi9rL0Ii

Her round of 16 effort was another long three-setter against Veronika Kudermetova.

Tomljanovic was almost out in straight sets in the second-set tiebreak, but ultimately prevailed in three.

Kvitova has over 800 matches on the WTA Tour; Tomljanovic has over 600.

And yet, somehow, they’ve managed to avoid each other all these years.

It’s a power vs power matchup, with Tomljanovic capable of serving a little harder, but Kvitova having the edge as the lefty, and with the power edge on her groundstrokes.

Tomljanovic did defeat Townsend earlier in the tournament, but the American is a completely different type of lefty to Kvitova. And, generally, Tomljanovic doesn’t have a great career record against lefties at the WTA level. She’s 10-16; Wang Xiyu, Mihaela Buzarnescu, Misaki Doi and Storm Sanders are among the southpaws who have gotten the better of her.

The Aussie also doesn’t have a great career record in quarterfinals at just 7-17. She has never won a WTA Tour title.

“It’s important that I still have the fight inside me, fighting for important points. It’s means a lot in this stage of my career. But it’s not really fun, overall, the traveling and packing and hotels. It’s just really tough to be professional tennis player.” — @Petra_Kvitova

The challenge for Kvitova, who will be the fresher of the two physically, will be what it always is – the warm, humid weather.

But Tomljanovic’s movement will have to be top-shelf to get through this matchup. And it’s likely she won’t be able to keep up the level physically – especially against a Kvitova who, as the kids say, is feelin’ it.

Tomljanovic has been to the quarterfinals at Wimbledon the last two years. But beyond that, this is only the second time she’s even won a round in the main draw in Cincinnati.

Generally she doesn’t go far at the 1000 events, in part because she’s always on the cusp of the main draw and has to win two qualifying matches just to even get in.

That’s the case this week, and it might well be the difference-maker vs. Kvitova.